Like many Americans, my first exposure to Stephen Chow was 2001's Shaolin Soccer.  I really enjoyed the hilarious mixture of sports and marital arts, and after seeing the equally amusing Kung Fu Hustle (2004), I searched out, and enjoyed, some of his earlier work.  So I was very eager to see his follow-up to Kung Fu Hustle, CJ7 released this year.  With four years to work on the film, which Chow writes, directs, and stars, I was expecting a fairly polished humorous film featuring outlandish martial arts action.  Unfortunately that's not what this film is.  It's Chow's attempt to make a Disney-like film for the whole family that ultimately fails due to a weak script and unlikable characters. 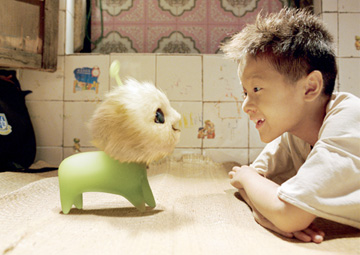 Ti (Stephen Chow) is a poor manual laborer who works long, hard hours on a construction site to put his only son, Dicky (Jiao Xu), in an elite private school.  The two live in an abandoned building, eat a near-starvation diet, and wear clothes that Ti finds in garbage dumps.   Though they are poor, Ti tries to instill honor into his son, often telling him that he should never lie, steal, cheat, or fight.

One day at school Dicky is amazed by a new toy that a student has, a robotic dog named CJ1.  Dicky begs his father for one (why he thinks they can get one when he doesn't have shoes or even a fan is beyond me) but they just don't have the money.  So Ti goes to the junk yard to search for some discarded treasure where he finds an unusual ball that, unbeknownst to him, was left by an alien craft.

Accidentally activating the ball one evening, it turns into a cute (CGI) alien 'dog' that Dicky dubs CJ7.  CJ7 has some amazing abilities, that it rarely uses, but Dicky imagines it can do much more than it actually can. 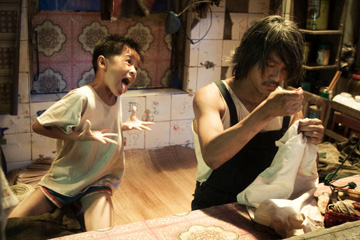 The main problem I had with this movie is that the script was horrible on several levels.  First and foremost is the fact that CJ7, the character the movie is named for, isn't really all that important.  Aside from one (rather ludicrous) act at the very end, the alien did not affect the lives of Ti and Dicky in any meaningful way.  His role could have been replaced by a stuffed bear missing one eye and the movie would have played out exactly the same (with the exception of one miracle at the end.)

Now this is the type of movie where you really have to be willing to suspend your disbelief, and I can do that for the most part.  Sure, it would make much more sense for Ti to send his kid to a public school and use the tuition money he was paying for something that would have benefited his child more, like, oh... how about FOOD, but that's okay, I can ignore that. 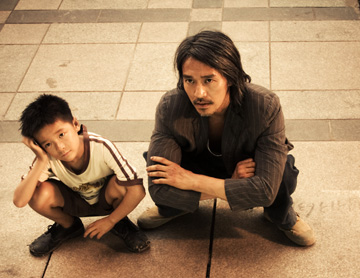 Dicky is a horrible person though, and I really can't get past that.   While his father is all about being honest even though they are poor, Dicky's first thoughts when he comes across CJ7 is how he can use the creature to cheat in school.  When that doesn't work, he abuses the alien.  At one point even throws CJ7 to 'the meanest dog in the world' to watch them fight.  When Dicky fails a test he changes his score on the exam and shows his father, who ends up getting in a fight at work and ultimately fired because he won't admit the grade is a forgery.  Yeah, nice kid.

Not only is Dicky mean to CJ7, but everyone who encounters the alien tortures him.  Ti pulls and squishes him mercilessly and the bullies at school take a hack saw to his limbs and are about to use a power drill on the helpless creature when they are stopped.  And that's the funny parts of the show. 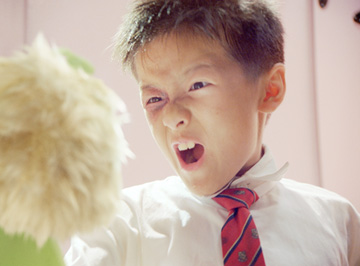 This film lacks the humor and wild karate action of Chow's previous endeavors.  There is one short fight scene (between kids) and another action sequence that takes place in a dream, but that's about it.  The humor is nearly nonexistent too. While there were a couple of mildly amusing scenes, the abysmal script kept them from being really entertaining.

The 2.40:1, 1080p AVC encoded image looks very good but not reference quality.  The image was a bit soft in places, especially medium shots that took place inside.  There was a good amount of detail however and the exterior scenes looked sharp and bright in general and often had a nice 3-D pop.  The colors were fine, but the blacks were very good.  Nice and inky and deep.  There is some grain, but it looks natural and is not intrusive.

The main problem is that the transfer is better than the CGI.  The digital elements don't mesh as well as they should and a lot of these stand out as being animated.  (The cockroaches are a good example.)  There is no evidence of EE or DNR, which is good.

The Dolby TrueHD soundtrack sounds good and comes in Mandarin, Cantonese, English, French, and Thai.  I screened the film with the Mandarin track (the default) and spot-checked the English dub.  I wasn't that impressed with the dub track.  It was fine, but the characters didn't sound real, and though the voice actors tried, the lip moments easily let on that it was a dib.  As for the audio quality, unfortuantely most of the sound comes from the front but when the rears kick in, like when the space craft takes off or when the men are all sledge-hammering concrete, the audio is quite impressive.  The dialog is crisp and clear and the front soundstage is used to good effect.

Columbia didn't skimp when it came to the extras for this film, though most of them are presented in SD.  First there's a commentary track with writer/director/star Stephen Chow, Fasto Chung, and other members of the cast and crew.  This is in Cantonese (I believe) with optional English subtitles.  This was a pretty lame commentary overall.  The people sounded like they were having fun, but there wasn't much substance to it.  Chow explains that he used certain songs because he liked them.  Okay...  The major revelation for me was that the actor who played Ti's son, Dicky, is really a girl.

As far as video extras go, there's a 12-minute making-of featurette The Story of CJ7 which has Chow talking about the film with copious clips from the movie, a CJ7 TV Special which runs nearly half an hour and was used to promote the film.  It's pretty much fluff, though there is some behind the scenes info.  Anatomy of a Scene explains how the added the CGI animation to the bathroom scene, and How to Make a Lollipop runs a little over a minute and illustrates how they made some of the props.

There's also CJ7:Mission Control an incredibly bad (even for DVD and Blu-ray discs) Java game where players have to help CJ7 get back into space.  Adding to the "so bad I can't believe they included this" category is How to Bully a Bully, and seemingly serious set of 'rules' to get rid of bullies.  Things like "get a smart and resourceful side kick" are just so bizarre that they defy comment.  Another tip is to confuse the bully "if their name is John, call him Tim. Once your bully is confused they can't concentrate on being a bully so he therefore de-bullified giving you the upper hand."  What you actually do while the bully is confused is never mentioned.  That's just plan bad advice and will most likely to get someone stomped.

The disc wraps up with some trailers and profiles of the cast.  It is also BD Live enabled.  There wasn't much in the way of content when I checked it for this review.

If you're expecting a funny and entertaining film like Stephen Chow's last two endeavors, you'll be sorely disappointed.  The terribly weak script and unlikable characters really make this a hard movie to get into, and the lack of action and humor don't help either.  The Blu-ray disc does have a great image and wonderful sound, but that's not enough to save this stinker.  Skip it.