The Criterion Collection // Unrated // August 12, 2008
List Price: $29.95 [Buy now and save at Amazon]
Review by Chris Neilson | posted August 8, 2008 | E-mail the Author
What Germans called the Eastern Campaign and Soviets called the Great Patriotic War figures prominently in two films of Soviet-Ukrainian director Larisa Shepitko, which are included in this eleventh release of the Criterion Collection's budget-minded, no-frills Eclipse series. Shepitko died in 1979, having completed just four feature-length films. Her first (Heat) and third (You and I) feature films, neither of which are included in this set, concern a generational conflict set against the backdrop of an agrarian commune, and ennui within the young Soviet intelligentsia, respectively. Shepitko's second (Wings) and fourth (The Ascent) feature films, which are included in this set, concern an emotionally-isolated veteran pilot still trying to accommodate herself to post-war life some twenty years after the Great Patriotic War's end, and a Jesus and Judas allegory set in wartime Belarus, respectively.

Shepitko was born in Soviet Ukraine in 1938. Abandoned by her husband, Shepitko's mother raised three children on her schoolteacher's salary. Shepitko entered the prestigious Gerasimov Institute of Cinematography (VGIK) in Moscow at age 17, where she became a protégé of fellow Ukrainian Alexander Dovzhenko during the last 16 months of his life. Her classmates included Andrei Tarkovsky, and her future husband Elem Klimov.

Shepitko's diploma film, the feature-length Heat (Znoy, 1963), is reminiscent of her former mentor Dovzhenko's early Soviet-Realist classic Earth (Zemlya, 1930) in style and subject matter. It earned critical and popular acclaim within the Soviet Union, but it was her subsequent three films that established her reputation abroad.

Wings (Krylya, 1966), included in this set, was the first of Shepitko's films to explicitly consider the Great Patriotic War, albeit indirectly. Set in contemporary Soviet Ukraine, Wings follows four days in the life of Nadezhda Petrukhina (Maya Bulgakova), a highly-decorated heroine of the Great Patriotic War. The 42-year-old former pilot, now a headmistress at a provincial academy, is still having difficulty reconciling her dramatic wartime memories with the drab realities of her post-war existence.

Stirred from a waking slumber by news that her estranged 22-year-old adopted daughter Tanya (Zhanna Bolotova) has married a 37-year-old intellectual that Petrukhina's never met, and whom she wouldn't approve of if she had, a suddenly reflective Petrukhina tries to take stock of her life, and perhaps set it right if she can. During these four days, the spinster Petrukhina considers marriage to her longtime friend, Pavel Gavrilovich (Pantelejimon Krymov), attempts a reconciliation with her daughter, and tries to reach an accord with a rebellious student from a broken home. Repeatedly during the four days, Petrukhina returns to the local airfield from which she flew combat sorties during the war. Her final visit to the airfield in the film's third act draws the narrative toward its open-ended conclusion which at best is bittersweet.

Petrukhina's drab post-war existence is visually emphasized by claustrophobic environs such as a packed commuter bus or a crowed office or apartment, and tight framing. In contrast, Petrukhina's frequent nostalgic daydreams of wartime often involve soaring through the clouds, young love with a handsome comrade aviator, and expansive vistas. 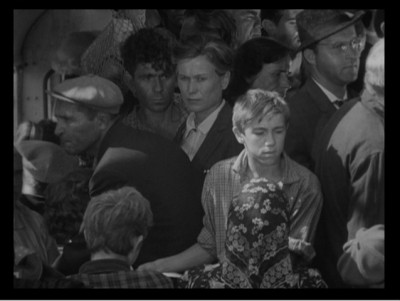 This character study in war-induced ennui and inter-generational conflict engendered considerable controversy within a nation not yet ready to publicly acknowledge the lingering psychological effects of the Great Patriotic War. Despite the controversy, Wings established Shepitko's place among the contemporary vanguard of young Soviet filmmakers.

Though 1968 marked the end of the dynamic period of Soviet filmmaking referred to as the Thaw, and the beginning of a prolonged period of stagnation in Soviet film, you wouldn't know it from Shepitko's third film, You and I (Ty I Ya, 1971), an elliptical, nonlinear tale of alienation among young Soviet intelligentsia, suggestive of the work of Michelangelo Antonioni and Alain Resnais. Though Soviet authorities declined to release You and I to general audiences in the Soviet Union, the film was critically acclaimed abroad earning a prize at the Venice Film Festival.

Shepitko's fourth and final film was the first to be embraced by critics and audiences in both the East and West. Adapted from a novella by famed Belorussian author Vasil Bykaŭ, The Ascent (Voskhozhdeniye, 1977) is a Jesus and Judas allegory of self-sacrifice and betrayal set against the backdrop of the Great Patriotic War.

The film begins without narration or explanation. A disordered group of raggedly-dressed, lightly armed men and women retreat across a snowy landscape. They are pursued by well-ordered and well-armed German soldiers. Gradually we learn that though the front line has swept past leaving them trapped in Nazi-occupied territory, the partisan unit of former soldiers and local peasants continue to wage a guerrilla war against the occupying German force. 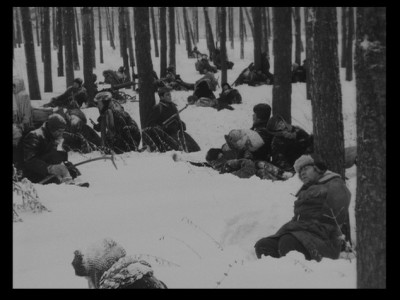 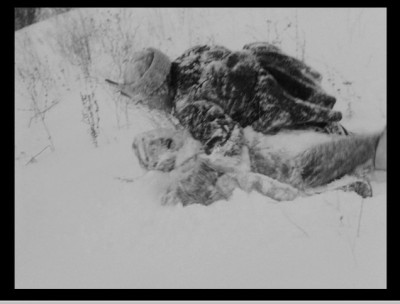 Pinned down in a small forest, the partisans send two volunteers to seek supplies. Through various ordeals faced by the two men of decidedly different temperaments, Sepitko invites the viewer to consider the contrasts in character among those living in enemy-occupied territory. Where one man will betray everything he holds dear to save his own life, another will sacrifice himself rather than compromise his integrity or his comrades.

Though Christian symbolism at odds with the prevailing atheism of the '70's Soviet State is frequently evidenced in The Ascent, the film was embraced within the Soviet Union for its heroic depiction of struggle by ordinary citizens against the German aggressors. Outside the Soviet Union, The Ascent was hailed for its dramatic narrative power, breathtaking cinematography by Vladimir Chukhnov, and hauntingly bleak and discordant score by Alfred Schnittke. 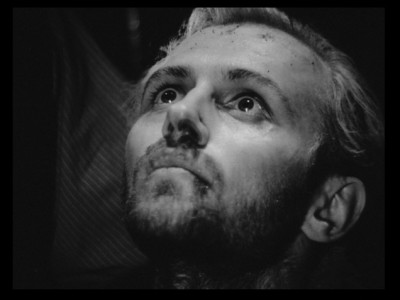 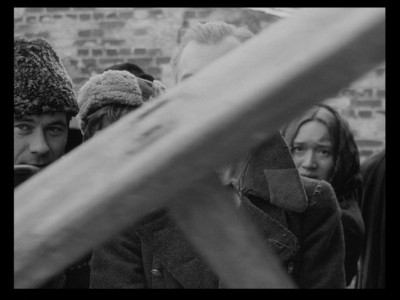 American essayist Susan Sontag called The Ascent "the most affecting film about the sadness of war I know." It went on to beat out Robert Bresson's The Devil Probably (Le Diable Probalement) for the Golden Bear at the 1977 Berlin International Film Festival, as well as earning several other prizes around the world.

On June 2, 1979, at the height of her career, Larisa Shepitko and four crew members were killed in a car crash while on location for the film The Farewell. Although Shepitko's reputation never matched that of Andrei Tarkovsky, and though her international acclaim was soon eclipsed by that of rehabilitated dissident-filmmaker Sergei Parajanov, and by that of her widowed-husband Elem Klimov, one can only speculate on what success she might have achieved had she not died so young.

The DVD
This set consists of two discs housed in separate slimline cases, enclosed in a single cardboard slipcover.

Video:
Though Wings was released in 1966 and The Ascent in 1977, both films were shot in black & white with an aspect ratio of 1.33:1 giving them a look in keeping with early Soviet post-war films like Cranes are Flying (Letyat Zhuravli, 1957) and Ballad of a Soldier (Ballada O Soldate, 1959).

Both films are presented in the loathsome windowboxed format now used by the Criterion Collection for 1.33:1 transfers. 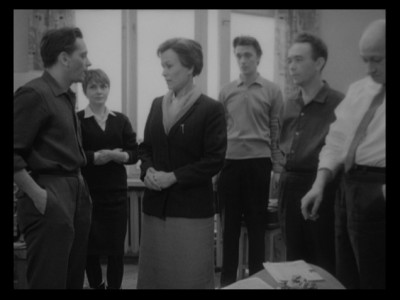 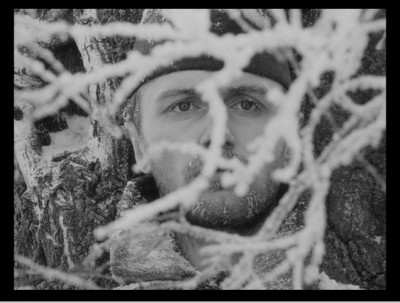 The Ascent: Beatitude in sharp focus

Audio:
Both transfers include Russian mono audio tracks. As with the image, the quality of the audio is distinctly more clean and clear on The Ascent than on Wings, though both are acceptable.

Both films feature optional English subtitles which are well-translated, and appropriately sized, paced, and placed.

Final Thoughts:
The war-related films of Larisa Shepitko released under the Criterion Collection's Eclipse label are highly recommended. While Wings is solid filmmaking on par with Mikhail Kalatozov's Cranes are Flying, The Ascent is breathtaking cinematic art. If Tarkovski's Ivan's Childhood (Ivanovo Detstvo) is the definitive Soviet war film of the 1960's, and Elem Klimov's Come and See (Idi I Smotri) holds that honor for the 1980's, Shepitko's The Ascent deserves that distinction for the 1970's.