When I heard that a TV series based on the Terminator franchise was in the works, I didn't holding out much hope that it would be very good. Don't get me wrong, I like the franchise. I was blown away by Terminator when I saw it during the original theatrical release and was astounded that the second film was as good, if not better, than the original. The third film was wretched however, and I just couldn't see how they could work a TV series around the premise without it getting silly. After a bumpy first episode however, Terminator: The Sarah Connor Chronicles surprised me. It turned out to be an intelligent yet fun look at the Terminator universe that works quite well.

Warning: This review contains spoilers for the first episode.

Starting a while after the events that took place in Terminator 2, Sarah (Lena Headey) and her son John Connor (Thomas Dekker), the boy who will end up being mankind's only hope in the future have still not settled down. After running for years and years Sarah doesn't know how to stop. When her current boyfriend proposes she takes John and runs away, one more time. 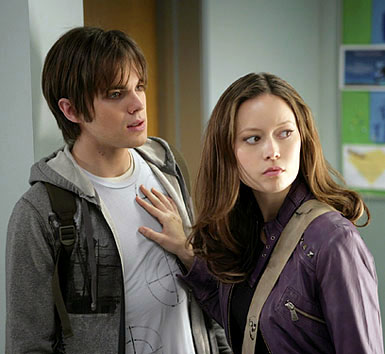 John ends up in yet another new school where he meets Cameron (Summer Glau) a cute girl who seems to genuinely like him. It turns out that she doesn't have the hots for him so much as that she's been programmed to protect him. Yes, she's a Terminator sent from the future, and where there's a good Terminator, there's a bad version too, sent to kill John. With Cameron's help John escapes from a substitute teacher/Terminator but he's one the run once more.

Cameron has a unique idea to get away from the Terminator that's been assigned to John once and for all: They rob a bank. Inside a series of safety deposit boxes are the ingredients for a time machine. In Cameron's time, a group of resistance scientists were sent in the past to fabricate a time travel device and hide it in the bank for just such an escape. The small group of Sarah, John, and Cameron lock themselves inside the vault while the robot from the future creates the device and a T-800 Terminator tries to break in. They manage to leap to the year 2007 just at the last moment, but unbeknownst to them the head of the Terminator travels with them.

Neatly bypassing the events of T-3, the series jumps to the present time where Sarah is still alive and John isn't a drug addict but the war with the robots still impending. Of course there are still dangers. The head that came into the present with them goes about trying to refashion a body for itself. There's also a group of fighters sent into the past to aide John and Cameron, but when they are located, it's too late; all but one of their number has been slaughtered by a Terminator. 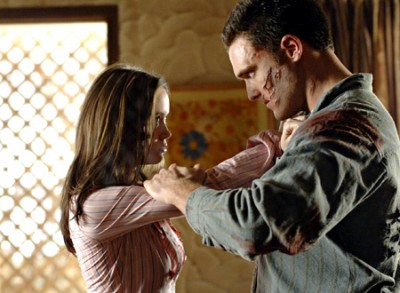 With several interesting subplots that carry through the season, included finding the maker of a chess computer that may have started the great war and staying one step ahead of an FBI agent who has been chasing the Connors for years, this show packs a lot of excitement into the nine episodes (the season was cut short by the writer's strike.) It definitely gets better as it goes along too. The writers become more familiar with the characters and the writing gets tighter and the show more enjoyable.

As a matter of fact, the weakest part of this season is the first episode. The writers had a difficult task, they had to start the show off with a bang, but also establish the story for viewers who may not have seen the movies, and find a way to invalidate the poorly conceived third film. The result is an episode that works, but just barely. They use up a lot of good will by starting with an action-packed fight scene that turns out to be a dream (oh please!) and then they add a lot of amazing coincidences on top of that (the T-800 head flying into the time field at just the right moment with no one noticing, among others), and a drastic change in Cameron's personality. (When John first meets her, she acts just like a regular girl, but after he discovers she's a Terminator she acts wooden and robot-like.) If you can get past that, you'll be rewarded with an enjoyable show that really does a good job of continuing the tale of the Connors. 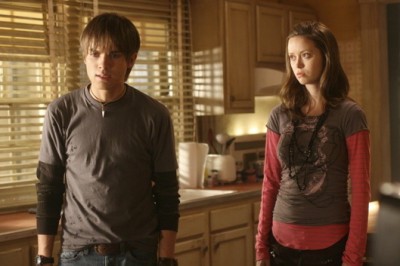 The acting is very good across the board. Lena Headey isn't a Linda Hamilton look-alike but she manages to capture the strengths of the character as Hamilton did and still make it her own. Over the course of the series she manages to show Sarah's vulnerable side, something that surely exists but rarely peaked out in the movies. Though Sarah's name is in the title, the show would have crumbled without a good actor playing John, and Thomas Dekker manages to pull off the difficult role. He has to be strong and independent, but not fool-hardy. Dekker gives John those traits, while still making him act like a teenager with an over protective mother. Some of the best scenes are where John is trying to deal with his mother, something that every teenager has problems with.

Summer Glau will be instantly recognized from Firefly. I loved her in that show, but was a bit disappointed that she basically plays the same role in this series. She has the same "not sure what's going on" look as River did, and I was hoping to see her play a different role here. Even if it is the same character essentially, Summer pulls it off well. Though not at all Summer's fault, the writers did put the "small waif-like girl kicks the big burly man's ass" scene in the series a bit too often. Yeah, it's funny, but after a while it becomes trite.

The show is presented with a 1.78:1 aspect ratio on three DVDs encoded in 1080p with the VC-1 codex and the Blu-ray discs look better than the HD broadcasts. The show has a few 'pop' moments that work very well, especially brightly lit exterior scenes, but even in the low light sections, which there are more than a few, the image has a very good amount of detail. Smaller objects have nice definition and the lines are tight. The colors are also good with the flesh tones being accurate and the various shades looking realistic without being boosted to an unreal level. The blacks were nice and deep, and the whites were bright without being crushed.

On the digital side things also looked very good. Aliasing wasn't a problem, thought there was some very minor posterization in a couple of spots and some grain did appear. Blocking and other compression artifacts were not a problem and edge enhancement wasn't present.

Unfortunately the only audio option is a 5.1 English sound track. While it sounds good, I couldn't help but wonder what the show would have been like with an HD audio codex. In any case the discs sounded good, especially when you consider that this is a TV show. The rears were sent a good amount of information during the battle scenes but there wasn't as much ambient noise coming from them as I was expecting at other times. The range was fine and there weren't any noticeable defect to the track itself.

The Blu-ray edition offers all of the special features that the SD DVD set does, which is as it should be, although most of them are in SD. Spread over the three discs, there are three commentary tracks, on Pilot with Summer Glau, executive producer/writer Josh Friedman, executive producer James Middleton and director David Nutter, episode 3, The Turk, with cast members Lena Headey and Thomas Dekker along with executive producer Josh Friedman and writer/executive producer John Wirth, and episode 9, What We Beheld, Summer Glau, Brian Austin Green, Josh Friedman and writer Ian Goldberg. None of these really grabbed me. There were a few too many dead spaces and the comments didn't really enlighten me or add much to my enjoyment of the show. These weren't bad commentaries they just were not anything very special.

Creating the Chronicles is a three-part 'making of' featurette presented in HD that runs about 40 minutes altogether. It features interviews with the cast and crew and discusses the genesis of the project, the special effects, and creating the world of the future. This was a good show that was pretty interesting and above average for this sort of thing.

Another nice bonus was the full version of episode 7 The Demon Hand. Eight minutes were cut from this in order to shoehorn it into the allotted time slot, and the full version plays better. The added scenes flesh out Sarah's character nicely. This is presented in 1080p.

The bonus sections are rounded out with deleted scenes, a gag reel, audition tapes and a rehearsal clip. Overall a nice set of bonus items that adds a lot to the total package.

I wasn't expecting much from this show. After all, how could you make a weekly series that could compete with the first two movies? The creators managed to pull it off and made a show with some intelligent plots and interesting stories. There are a few surprises along the way that add a lot to the show, and make this a must-buy for fans of the Terminator franchise. The series looks great on Blu-ray and though there is only a 5.1 audio option, it does the job well. Highly Recommended.