If you ask the average person to name a living Hong Kong movie star, chances are you'll get either Jackie Chan or Jet Li as a response.  While there have been a couple of other Asian stars that have crossed over to Hollywood (the wonderful Michelle Yeoh comes to mind as well as Chow Yun Fat) none of them have gained the popular appeal as those two martial artists.  So what would be more natural than to have the two stars appear in the same movie and fight each other?  It would be a dream come true for Hong Kong film fans and that's exactly what happens in The Forbidden Kingdom.  Unfortunately it's not quite the film fans were hoping for.  With a simplistic plot and teenager as the lead character, when all is said and done this is a fun family adventure, but not one that ranks up there with Once Upon a Time in China or Drunken Master. 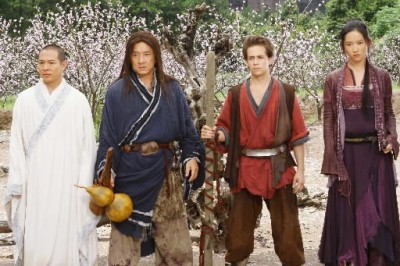 Jason Tripitikas (Michael Angarano, Sky High) is a nerdy high school kid who loves martial arts movies but has never taken a lesson himself.  While scouring his favorite pawn shop in China Town for bootleg DVDs of Hong Kong action films he notices a golden Bo staff in the backroom.  The proprietor, Old Hop (Jackie Chan, nearly unrecognizable in old-man makeup) says that the staff has been in the shop for over 100 years, since the time his grandfather started it.  He's waiting for his owner to pick it up, but he's never shown up.

Later that evening Jason runs into a gang of thugs who force him to help them get into Hop's store after closing so they can rob it.  The old man tries to fight them off, but is shot.  Gasping for breath Hop gives the golden staff to Jason and tells him to return it to its rightful owner.  With this cryptic instruction, Jason runs off with the rest of the gang hot on his trail.  They corner him on a nearby rooftop but Jason, seemingly being pushed by the staff that he holds, falls off the ledge.

He doesn't end up on the ground however.  When he wakes up, he's in ancient China.  The locals are being ground under the thumb of a dictator, the immortal Jade Warlord (Collin Chou).  Jason soon meets Lu Yan (Jackie Chan), the drunken immortal, who tells him that the staff belongs to the Monkey King.  The King was tricked by the Jade Emperor into giving up the staff and was turned to stone, and it's Jason's task to bring the staff back to its owner and free him from his statue state. 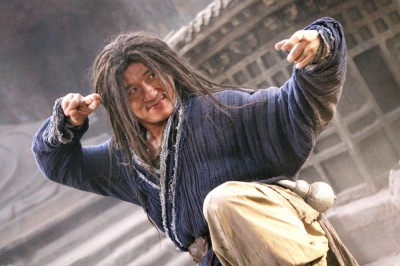 Jason and Lu Yan are joined by Golden Sparrow (newcomer Yifei Liu) and after a misunderstanding that results is a fight, The Silent Monk (Jet Li).  Together the group travels across the country to get to the temple of the Jade Warrior where the Monkey King waits.  They have to get past Ni Chang (aka The Bride with White Hair, Bingbing Li) and the whole of the Jade Army.

While this is a fun martial arts movie with some great action sequences, it's not all that it could have been.  The main thing that struck me as odd is that the star is a no-name American actor.  With two stars like Jackie Chan and Jet Li, either of which can carry a movie all by themselves, why have the lead go to someone else, especially someone with such little screen presence as Angarano?  He's totally overshadowed by his more famous co-stars and brings nothing to the movie. 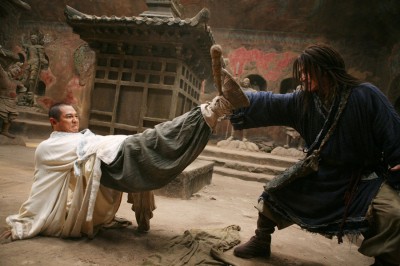 The direction is only so-so.  While the fights look good, the rest of the film isn't constructed and put together with the level of expertise I was expecting.  For example, the overly long intro sequence left me scratching my head.  The whole bit of a youth traveling through time and space to learn important life lessons gave the film a Disney-like feel that it didn't need.

On the positive side, once the narrative does switch to Japan the movie picks up quite a bit.  There are many fighting scenes, where both Jackie Chan and Jet Li do their stuff.  They're both getting a bit old, Jackie Chan is well over 50 and not quite as fast as he used to be, but he acquits himself well.  There are a couple of humorous fights sequences thrown in for Jackie's fans, as well as some straight fights for Li's fans.  The scene where they fight each other is great and one of the high points of the film. 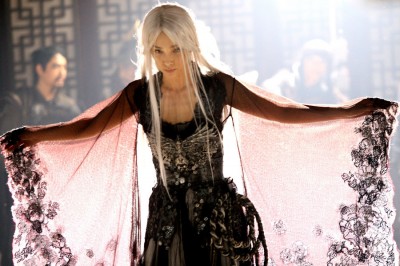 The film doesn't have as much humor as I was hoping, but when it is added it works quite well.  In one scene Lu Yan and the Silent Monk are arguing about the best way to teach Jason Kung Fu.  The Lu Yan uses the poor boy as a puppet while the two masters shout out their favorite techniques and illustrate them on the unfortunate Jason who is caught in the middle.  It's a laugh out loud funny scene that worked well.

This film comes in a two disc set.  The first is a Blu-ray disc with the feature and bonus materials, and the second is a DVD with a digital copy of the movie for computers and iPods.

The 2.35:1 AVC encoded image looked very good overall.  The colors were bright and vivid and really added a lot to the film.  Seeing Jet Li in stark white robes in front of a deep green bamboo forest was very striking.  Likewise the fight among the blossoming cherry trees was visually stunning with the white blossoms contrasting nicely with the brown ground and Chan's blue outfit.  The skin tones were generally fine, but there was a scene or two where blacks in dark shadows had some blocking.  When Jackie Chan in lying in bed near the end of the film his hair on the left side of the screen shows this digital defect.

The level of detail was very good, and several of the exterior scenes really popped.  When Jason first emerges from the hut after being transported to China, for example, he really stands out from the background.  There was some posterization/banding in a couple of scenes too, when the screen starts fading after the Monkey King's first battle is a good example of that.  All together these flaws are minor and don't adversely effect the movie.

The movie comes with a 7.1 DTS HD Master Audio track that sounds very good.  The full soundstage is used for the big battle scenes, especially the all-out fight at the end of the film with the sounds of soldiers yelling and metal clashing coming from all corners.  The range was excellent, and though subwoofers don't get quite the workout I was expecting both the low and high ends are well represented.  The film also sounds good in the more sedate sections, though the audio is pretty much centered on the screen in those places.

This movie has a lot in the way of extra features, but it's a case of quantity over quality.  None of these featurettes really impressed me.  First off is an audio commentary by director Rob Minkoff and writer John Fusco.  They discuss the origins of the project and the Chinese tales that inspired the movie as well as the filming of the feature.  While it's not a bad commentary, they didn't really pull me in the way the best tracks do.

There are a series of six deleted scenes lasting about 8 minutes with optional commentary, most of which deserved to be cut.  The only segment that really added to the story is one where Jason and Sparrow kiss.

The six featurettes (all in HD and lasting 5 to 10 minutes long) are all pretty much promo pieces and talk about how wonderful the movie and retelling the story rather than giving any substantial information about the creation of the film.  "The Kung Fu Dream Team" talks about Jet Li and Jackie Chan and how this is their first film together, "Dangerous Beauty" interviews the two female leads, "Discovering China" concerns the locations in China that were used for the exterior scenes,  "Filming in Chinawood" talks about the studio work at the Hengdian World Studio in southern China, "Monkey King and the Eight Immortals" has the writer describing how he made up the tale as a bed time story for his son,   "Storyboards and Previz" illustrates how the storyboards were animated to give the creators an idea of what the movie would look like before shooting began.

The biggest surprise was the blooper reel.  Jackie Chan's films often end with the outtakes rolling during the credits and they're usually uproariously funny.  This reel?  Not so much.  It mainly consists of people flubbing their lines and laughing or sticking their tounge out toward

There's also a picture-in-picture option that plays clips from the featurettes while the movie runs in addition to showing some of the raw green screen footage, which was interesting.  The main problem was that the comments didn't always deal with what was going on in the movie at that point.  I'm not a big fan of these types of commentaries, and this one didn't do much to convince me I was wrong.

Finally this disc has a Molog feature (an on-line discussion forum for the film) which wasn't working when I reviewed this disc, nearly two weeks before the street date.

Ultimately this movie is aimed at the family audience, and that's too bad.  This first ever teaming of two Hong Kong movie legends should have relied on what they do best rather than catering to the widest possible audience.  Even so, it's worth seeing.  The action scenes are good and there's enough meat in the film to make it worth while.  As long as you don't set your expectations too high, this movie comes recommended.