Wire - The Complete Fifth Season, The 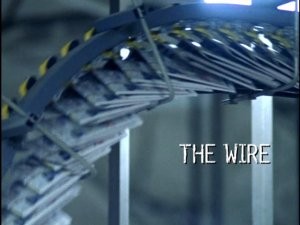 The Fifth and Final Season

HBO's hit television crime drama The Wire is an intense show. The first four seasons were amazing and its fifth is no exception. Season five continues to offer the same high quality of entertainment with topnotch writing, engaging storylines, riveting characters, and intense drama. For those unfamiliar with the series, it is based in Baltimore, Maryland and looks at the Baltimore Police Department's (BPD) major crimes unit using wiretaps and pen registers to unravel the complex ties of the local drug trade. One of the show's strengths is its ability to go beyond the common cop show, as The Wire expands into additional territory and has a variety of multi-faceted characters. For more details about this amazing series, refer to DVD Talk's reviews of season one, season two, season three, and season four.

Season five is the last of The Wire. Like the first four seasons, it is an intense experience. This season changes things up and focuses on the media's perspective of crime in the city. The media is represented by employees at the Baltimore Sun and their internal struggle to report the "news". At the same time, the criminal element, the police, and the mayor's office are integral pieces to the story. For fans of the series, season five will not disappoint. However, you might feel a little sorrow when the final minutes of the series finale roll and you know there will be no more of The Wire. Nevertheless, it is a fantastic season.

Fifteen months after the closing of season four, the city of Baltimore is in a fragile state. Mayor Carcetti had promised the citizens and the public workers of Baltimore to stop crime and to fix the problems in the educational system. Unfortunately, Carcetti overtaxed himself. In order to make good on his promises to the citizens, he moved as much money as possible to the school system. In the process, the police department faced a lot of financial cutbacks. The promised bump to police salaries forgotten, overtime slips ignored, and equipment neglected. 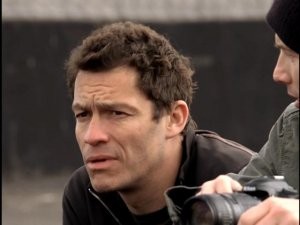 The worst of the cutbacks came to the Major Crimes Unit, which was responsible for taking down Avon Barksdale and focused on bringing Marlo Stanfield to justice. Carcetti, Commissioner Burrell, and Deputy Commissioner Rawls made the decision to disband the unit. When Lt. Daniels found out, he and Rhonda went to the mayor and tired to convince him to keep the unit active. They were able to keep Freamon and Sydnor on the job. Freamon and Sydnor were tasked to prep for the case against Senator Clay Davis. The rest of the team was sent to homicide. Further up the ladder, political games are afoot as the crime stats rise and the bodies stack up.

At the same time that the city faced major cutbacks, the Baltimore Sun followed in suite. In general, since the rise of the Internet, print media has not been able to compete. The Sun fired the majority of its seasoned investigators. The city desk editor Gus Haynes (Clark Johnson, Homicide: Life on the Street) is one of the few veterans kept on staff. He is responsible for working with a small team of junior journalists. Amongst them are Alma Gutierrez (Michelle Paress) and Scott Templeton (Thomas McCarthy). Alma is at the beginning of her career and looking to work her way up the corporate ladder. While she is eager, she has morals and ethics. Templeton is another story. He has moved from paper to paper and is willing to do almost anything to get recognition.

While the police cutbacks are settling in, McNulty reacts in a bad way. He drops any ethics that he has left. He feels that if the bosses are going to ignore the murders and fake crime statistics, he will take matter into his own hands. McNulty stages a series of murders -- a serial killer is running rampant in Baltimore and killing homeless men. At first, McNulty's serial killer is ignored by all the other things happening in the city. Templeton fakes a story about his involvement with the killer and it becomes national news and McNulty's case turns into a red ball. 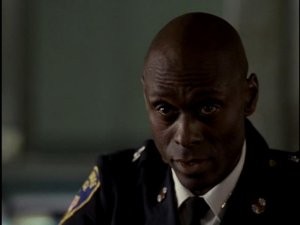 Afterwards, McNulty and Templeton become at the bottom of lies. McNulty uses his red ball case to get resources to fund the Major Crimes Unit and other police work that had been previously ignored. Freamon is able to continue focusing on Marlo. It comes at a cost, as McNulty piles on the lies to get more resources, while he loses the respect of Greggs and Bunk. Meanwhile, Templeton becomes a favorite of the paper's editor and executive editor. Haynes gets suspicious of Templeton's technique and his concerns are brushed away.

As the story continues, the relationship between McNulty and Templeton's action play a vital role in the main plot development. There are several subplots that add to the story or detail a critical aspect. Some of the subplots include Bubbles facing his personal demons and coming to terms with Sherrod, a major power shift in the drug world as Marlo moves against Joe, Michael and Dukie continuing their independent life, Alma struggling with being a small fish in big pond, Carcetti running for mayor, Omar returning for revenge, and more.

Overall, season five is an excellent addition to the series. The season's focus of the media's perspective gets pretty intense. Part of what makes it so intriguing is how well the stories are written and how the plots and subplots fit together. The result is an entertaining, intriguing, and intense drama. The show also does a fine job with its character development, touching upon all kinds of emotions: compassion, fear, hatred, pain, anger, happiness, etc. David Simon and team outdid themselves once again. For fans of the series, The Wire's fifth season is a must. Newcomers will want to start with season one and work there way to season five. 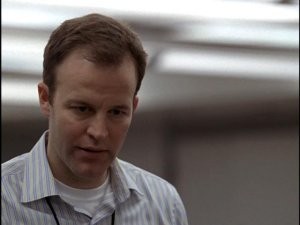 1. More With Less: As McNulty and the detail continue staking out Marlo's crew, Sergeant Carver is welcomed by a cauldron of discontent from officers coping with unpaid overtime. Meanwhile, City Editor Haynes of a local newspaper copes with corporate downsizing, and with the help of reporters Gutierrez, Price and Templeton breaks a front-page story that links a politician to a co-op drug dealer.
2. Unconfirmed Reports: Although he tells Sydnor the Davis investigation could be a "career case", Freamon keeps an eye out for Marlo, who takes care of some unfinished business and strikes a business deal with Barksdale. Chief of Staff Steintorf blames the Royce administration for the Campbell revelation. Fed up with broken-down cars and unsolved serial murders, McNulty decides to take matters into his own hands.
3. Not For Attribution: Carcetti's master plan for the police department is leaked to the press, sending the brass into a panic. Marlo turns to Proposition Joe to help with an enviable problem. Michael takes Dukie and Bug on a trip. McNulty shares some inside info with Alma, but her subsequent story doesn't cause the splash either envisioned. Undaunted, McNulty looks for a new ally in Freamon.
4. Transitions: Campbell tries to smooth out the transitions in the police department. The newspaper scrambles to confirm surprising news from City Hall. As Marlo tries to win favor with the Greeks, Proposition Joe pays his last respects to a fallen colleague, and prepares to make himself scarce in anticipation of a showdown. Freamon enlists the help of a past partner to help with the investigation.
5. React Quotes: Marlo forges an alliance with a drug connection, who shows him a new communications trick. McNulty's case gets increased attention from the newspaper, in large part thanks to the addition of Templeton to the reporting team. Dukie turns to Cutty and Michael to hone his self-defense skills. Clay Davis finds a new ally. Omar shows patience as Marlo throws out his bait.
6. The Dickensian Aspect: Bunk revisits some old leads in the rowhouse cases. Templeton looks for a perfect follow-up to his latest, nationally covered story, which has replaced the city's educational crisis on the paper's priority list. After the detail gets more manpower, Freamon presses McNulty to get new surveillance equipment, but the resources aren't as deep as both had hoped. McNulty takes a peculiar interest in a homeless man.
7. Took: An unexpected call puts Templeton back in the spotlight - and gets McNulty more attention than he expected. Bunk bucks at Landsman when ordered to help with the force's most recent red ball. Freamon tries to crack a clock code. Michael has a close call. Assisted by the top-drawer lawyer Billy Murphy, "cash and carry" Davis makes his day in court a memorable one.
8. Clarifications: Baltimore's renewed police commitment brings fresh recruits to Daniels and McNulty, starting with Carver. Facing a new political challenge, Carcetti is forced to make dangerous political deals. As the Pulitzer season winds down, Haynes approaches Templeton about his sources. Bunk returns a McNulty favor. Freamon presents his latest plan to a prosecutor. Sydnor uncovers the missing piece to a puzzle, and McNulty comes clean.
9. Late Editions: With Steintorf ordering Rawls to initiate "creative" remedies for the rising crime rate, Freamon's vigilance pays off with a promising lead. Although Daniels is originally delighted, a further probe with Pearlman reveals some troubling source information. McNulty, feeling betrayed, doesn't feel like sharing in Freamon's celebration; Namond's debating skills make Colvin proud; Bubbles recounts a recent temptation overcome.
10. -30-: Carcetti maps out a damage-control scenario with the police brass in the wake of a startling revelation from Pearlman and Daniels. A frustrated Haynes finds his concerns about Templeton falling on increasingly deaf ears. Convinced he ahs the upper hand but caught in a legal quandary, Levy plays a cat-and-mouse game with Pearlman. As the officers stage an Irish wake for another dearly departed officer, the seeds of the future are sown throughout Baltimore. 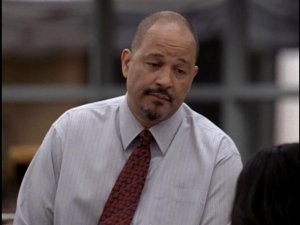 
Video:
The video is given in 1.33:1 ratio full frame color format. The picture quality is pretty good, albeit there is noticeable grain and dirt. However, it should not interfere with your viewing experience.

Audio:
The audio in this release is given in English 5.1 Dolby digital surround sound. There is also an additional track in Spanish 2.0 Dolby digital stereo sound. Overall, the sound quality is very good, providing an audible and clean audio track. The 5.1 track sounds great, with the majority of activity in the forward channels. Music and sound effects sound very rich and vibrant. There are also subtitles in English, French, and Spanish. 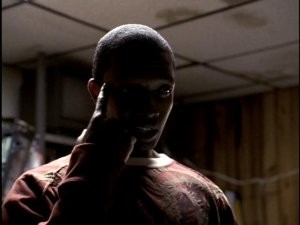 Final Thoughts:
The Wire is a television crime drama that goes beyond police investigations and courtroom procedurals. Since its first season, the series has captured the attention of viewers with its intense and complex storylines that develop characters on both sides: police and criminals. It also includes the political side. This season expands the show's focus to include the media. The result is a fascinating drama that does not fail to entertain. The Wire's fifth season is television at its best and something everyone must see.