BBC Worldwide // Unrated // August 5, 2008
List Price: $34.98 [Buy now and save at Amazon]
Review by Stuart Galbraith IV | posted August 31, 2008 | E-mail the Author
A special, feature-length Doctor Who story commissioned for the long-running BBC series' 20th anniversary in 1983, The Five Doctors is a light-hearted and nostalgic delight bringing together, sort of, all five incarnations of the roguish Timelord from the planet Gallifrey, originally played by William Hartnell (1963-66), Patrick Troughton (1966-69), Jon Pertwee (1970-74), Tom Baker (1974-81), and Peter Davison (1981-84). (David Tennant, the current Doctor, is the 10th actor in the role, not counting Peter Cushing's appearance in two film adaptations.)

This Five Doctors release is billed as a 25th Anniversary Edition. The story was previously released to DVD in 2001 (on September 11th, as a matter of fact) but that earlier DVD had limited extras and included only a revamped version of the story created in 1995, one that featured some new visual effects and expanded scenes. (Fans seem to agree the new stuff is nice, but unnecessary.) This new release includes both the revised version from 1995 as well as The Five Doctors as originally televised in 1983, on two separate discs. And, once again, 2|entertain and BBC Video have outdone themselves in the extras department; it's positively crammed with supplements of all kinds. 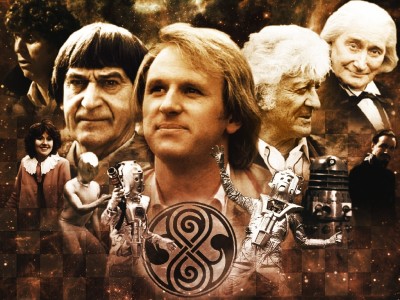 Though obviously designed to cash in on the program's 20 years on the air, during which time it became as much of a pop culture mainstay in Britain as Star Trek in America or Ultraman in Japan, Terrance Dicks' teleplay is clever, funny, and involving. Beyond the five Doctors, it somehow manages to work in cameos for many of the Doctor's most famous opponents and companions, and myriad references to earlier episodes, but only very rarely does it feel forced. It must have been a logistical nightmare bringing all this talent together; that it works as well as it does is a minor miracle.

The story begins with the fifth and current Doctor (Davison) enjoying a respite on the Eye of Orion with companions Tegan (Janet Fielding) and Turlough (Mark Stickson), but their stop is short-lived when the Doctor becomes doubled-over with pain and begins to feel himself slipping away into nothingness. In other dimensions, earlier incarnations of the Doctor are whisked away by flying triangles that strongly resemble the mirror-like, floating "Phantom Zone" from the Superman movies.

The First Doctor (Richard Hurndall) is snatched from his rose garden; the second Doctor (Troughton) is kidnapped along with longtime associate Brigadier Lethbridge-Stewart (Nicholas Courtney) at a UNIT reunion. The third Doctor (Pertwee), along with his yellow roadster, Bessie, is taken along a country road, while the fourth Doctor (Baker) disappears while punting at Cambridge. The fourth Doctor becomes trapped in an other-dimensional state of limbo, but the other doctors are all deposited on Gallifrey, in its Death Zone near the Tomb of Rassilon, founder of the Time Lords. Eventually other characters from the Doctors' pasts (and futures) turn up as well, including the (First) Doctor's granddaughter, Susan (Carole Ann Ford), Sarah Jane Smith (Elisabeth Sladen), and the Doctors' arch-rival, the villainous Time Lord known as The Master (Anthony Ainley).

Creating this special show presented problems. In a decision for which he'd later express regret, Tom Baker chose not to participate, prompting the producers and Dicks to use footage of Baker from an unaired Doctor Who story called Shada. That show was partially filmed around 1980 but scrapped due to a strike among BBC employees. The use of the footage is effective, but then Baker's character is kept in perpetual limbo and, obviously, never interacts with the other Doctors in new footage, and his absence damages the show slightly.

The other big problem was that the first actor to play The Doctor, William Hartnell, had died in 1975 after a long illness, three years after making a final acting appearance in another multi-Doctor story, The Three Doctors. For The Five Doctors, the writer-producers make the very touching gesture of including some archival footage of Hartnell in a pre-credits sequence, delivering a much-loved monologue from the episode The Dalek Invasion of Earth (1964). After that clip, he's played throughout by another actor, Richard Hurndall.

Hurndall's performance, even more than the fun of seeing Troughton and Pertwee again, is the show's biggest, most delightful surprise. He looks a bit more robust and fleshier than Hartnell ever was, but in costume and white wig it's still a pretty uncanny resemblance. Hurndall doesn't imitate Hartnell directly but remains so true to Hartnell's cantankerous interpretation of the character that it's almost like seeing a ghost. (Actress Carole Ann Ford says much the same in the show's special features.) It's a charming performance.

Predictably, Pertwee and Troughton are also a lot of fun to watch, especially in their scenes together. The DVD's special features directly and indirectly allude to a certain rivalry and proprietary attitude among several of the actors, and this manifests playfully between Pertwee and Troughton. Each would play the Doctor one last time, but not together, alas.

As you can imagine, this is not the sort of thing for newcomers to the show unfamiliar with the different approaches the various actors have given the character, or the many adventures this story references. As someone who didn't get into Doctor Who until about five years ago (about a year before the revised series began airing), I was able to enjoy it having sampled perhaps 30 or 40 pre-1983 stories. Viewers less familiar with the show might want to sample at least that many shows before taking on this one.

The Five Doctors is presented on two discs: Disc One includes the original, 1983 broadcast version which runs 90 minutes, and another 79-minutes worth of extra features. Disc Two offers the 1995 version, running 102 minutes, plus another 88 of special features.

The show looks swell, albeit filmed in the usual mix of videotape (for studio interiors) and 16mm color film (for location exteriors), all on a single-sided DVD9. The mono audio is adequate.* Optional English subtitles are available, including on all the extra features.

As with most Doctor Who releases of recent years, this is really loaded down with supplements. Sometimes this gets to be almost overwhelming, and on some of the weaker shows, arguably undeserved, but here there's lots of fun for die-hard and casual fans alike. Audio Commentaries accompany each version. The 1983 broadcast version features actors Carole Ann Ford, Nicholas Courtney, Elisabeth Sladen, and Mark Strickson, while the 1995 re-edit features Peter Davison and Terrance Dicks. Isolated Music Tracks are available on both versions.

The highlight among the supplements unquestionably is Celebration (52 minutes, 16:9), hosted by Sixth Doctor Colin Baker, which not only looks at the making of this special Doctor Who story but also the media whirlwind surrounding the show's 20th Anniversary. Some of these shows have tended to be a bit too compartmentalized (ten minutes on the spfx, ten minutes on the locations, ten minutes on the casting, etc.) but this is very entertaining throughout. Like the rest of these BBC shows, it's impressively honest about certain darker aspects of the production, such as Pertwee's short-temperedness and occasional insensitivity toward his actor-colleagues, or Baker's proprietary attitude toward the character (at a major fan gathering in England, he refused to be seen with the other Doctors). Most of the key surviving players in the creation of this show are interviewed, and there's a feast of clips from various British chat shows, the segments of which are included in their entirety on Disc Two: Saturday Superstore, Blue Peter, Nationwide, and Breakfast Time (29 minutes in all). Trails and Continuities (19 minutes) assembles scads of promo BBC ads and the like promoting the show, along with bumpers of cut-down broadcast versions, etc.

Disc Two includes The Ties That Bind Us (26 minutes), an exhaustive examination tying references to past shows with clips and helpful explanations. Five Doctors, One Studio (18 minutes) samples raw footage of the four Doctors in studio, while Outtakes (six minutes) offers more of the same. (Not So) Special Effects (9 minutes) illustrates the rudimentary nature of the show's effects in yet more raw video footage.

Doctor Who - The Five Doctors: 25th Anniversary Edition is enormous fun for fans of Classic Doctor Who. (I most enjoy the Hartnell-Troughton-Pertwee shows and the Christopher Eccleston revival, but the other Doctors less so.) It holds up well, and the supplements are great. Highly Recommended.

* Reader Ryan helpfully wrote "to point out [the review] didn't mention that the SE version has an excellent 5.1 soundmix." He adds that there's an "easter egg...on the broadcast version [in the form of] a full length audio commentary by 10th Doctor David Tennant, new series producer Phil Collinson and script editor Helen Raynor. 8th Doctor Paul McGann is the narrator for The Ties That Bind. On a restoration note the film sequences were remastered from the original film which was retained by the BBC and looks incredible."