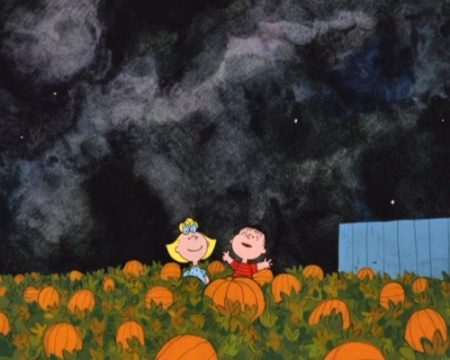 PROLOGUE: Ah, Halloween is in the air. The weather forecast predicts temperatures in the mid-90s next week, there's a barbecue later today and I almost got stung by a wasp this afternoon. If my luck holds up, I'll probably get to review A Charlie Brown Christmas just in time for Thanksgiving.

We've all got our holiday traditions. Some folks have egg hunts on Easter, some split a wishbone on Turkey Day and others travel up to Punxsatawney on February 2nd. In turn, film lovers and couch potatoes often curl up in front a warm screen to watch holiday-themed movies and TV shows every year, from It's a Wonderful Life to A Christmas Story. The Peanuts animated specials are perennial favorites around these parts, and It's the Great Pumpkin, Charlie Brown is no different. This entertaining tale of tricks, treats, rocks and The Red Baron has been a Halloween staple since it first aired on October 27, 1966, initially scoring a 49% ratings share for CBS. Needless to say, people of all ages loved it.

As the third Peanuts special unleashed on the general public (right behind A Charlie Brown Christmas and Charlie Brown's All Stars), The Great Pumpkin was a confirmation of the series' enduring success in animated form---and since most of us have grown up watching the adventures of Charlie Brown and company during the last few decades, it's obvious that Peanuts stayed successful for quite some time. From start to finish, The Great Pumpkin exhibits all the strengths that gave the Peanuts specials such undeniable staying power: refreshingly simple animation, bold colors, a timeless score by Vince Guaraldi...and of course, Charlie Brown's unyielding pathos.

You'd have to search far and wide to find someone unfamiliar with The Great Pumpkin, but here's a quick recap anyway. Halloween night is fast approaching, and everyone's getting their costumes ready for Trick or Treat...except for Linus, who shuns the sugar-fueled tradition for one of his own. He's faithfully expecting The Great Pumpkin, a magical being who brings presents to children waiting in the most sincere pumpkin patch. The other kids make fun of him for believing such nonsense, though Charlie Brown's sister Sally ends up skipping candy collection (and Violet's party!) to be with him. While all this is unfolding, Charlie Brown's dog, Snoopy---in what might be the most surreal subplot in Halloween history---is shot down by The Red Baron and crosses the French countryside in search of shelter. 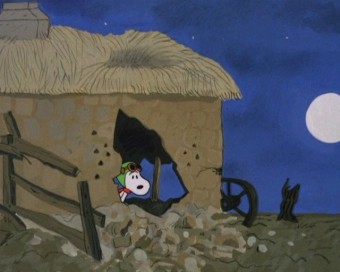 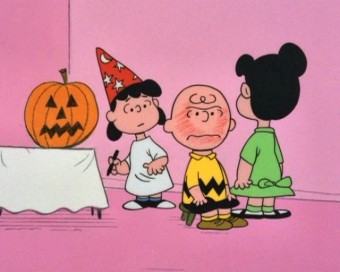 Mysterious, poignant and completely entertaining, The Great Pumpkin has held up extremely well during the last 42 years. Charles Schulz's original story is touching and funny without feeling forced at all, composer Vince Guaraldi's pitch-perfect score is as memorable as ever (and only bested slightly by A Charlie Brown Christmas), the young voice actors are terrific and director Bill Melendez keeps the Peanuts formula in shape from start to finish. All things considered, this little 25-minute slice of animated magic remains as compelling as ever---and without a doubt, The Great Pumpkin will entertain future generations, whether it's viewed on Halloween night or a humid August afternoon.

Originally released on DVD by Paramount back in 2000 (as both a stand-alone release and as part of a holiday boxed set), The Great Pumpkin finally gets an upgrade courtesy of Warner Bros., who acquired the rights to the Peanuts library last October. This isn't the first catalog release from the studio---though it is the first of the "Big Three" holiday specials, with the others slated for release in the coming months. This new Deluxe Edition isn't exactly on par with Looney Tunes collections in terms of bonus content, but a notably improved visual presentation makes it worth the wait; for proof of this, see the direct screen comparisons linked below. Let's take a closer look, shall we?

Presented in its original 1.33:1 aspect ratio, The Great Pumpkin looks greatly improved in direct comparison to Paramount's 2000 release [samples linked below]. The film's color palette is more natural and vivid (if not slightly on the pink side), while foreground and background details are much crisper than before. Black levels are also very consistent during the film's numerous nighttime sequences. Additionally, interlacing is no longer an issue [see comparison #1], which was undoubtedly the Paramount DVD's biggest problem. From top to bottom, Warner's remastered visual presentation is fantastic---and if this is any hint of future Peanuts releases, fans are in for a real treat.

Though not quite as noticeable as the visual improvements, this Deluxe Edition's audio treatment is satisfying in its own right. Presented in its original Dolby Digital Mono (also available in Spanish, Portuguese and Japanese), the dialogue and music cues are generally crisp and clear. Very slight amounts of hiss and crackling can be heard along the way, but this is undoubtedly due to the source material. Optional English, Spanish, Chinese, Japanese, Korean, Portuguese and Thai subtitles are included during the main feature(s) only. 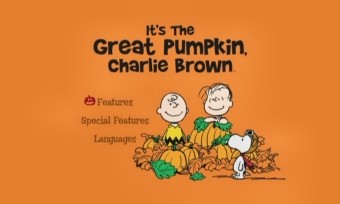 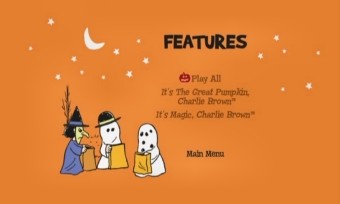 Seen above, the animated menu designs are basic and easy to navigate. The 25-minute main feature has been divided into 5 chapters, while no obvious layer change was detected during playback. This one-disc release is housed in a standard black keepcase with a metallic embossed slipcover; also tucked inside are a few promotional inserts.

Bonus Features
Though not technically an extra, also included alongside the main feature is It's Magic, Charlie Brown (24:15, below left), a 1981 Peanuts animated special that's new to Region 1 DVD [NOTE: Paramount's 2000 release includes You're Not Elected, Charlie Brown]. Though Vince Guaraldi had already passed away and all of the key voice actors are different, this charming short still retains the classic Peanuts style and sensibility in almost every respect. Written by Charles Schulz and produced by Bill Melendez, this presentation of It's Magic looks and sounds fairly decent...but it's not quite as polished as the main feature. In any case, if someone from Warner reads this: Flashbeagle would be greatly appreciated.

The lone Pumpkin-related extra is "We Need a Blockbuster!" (13:57, below right), a retrospective featurette with comments from director/animator Bill Melendez, producer Lee Mendelson, former CBS programming executive Fred Silverman, Peanuts historian Scott McGuire, Charles' son Monte Schulz and several others. It's a terrific little trip into the past, back when Peanuts specials pulled in monster ratings and only three networks competed for the public's attention. This featurette is definitely worth a look, especially for lovers of animation history and Schulz fans in general.

Both extras are presented in 1.33:1 format, but only It's Magic includes optional English captions. This proves to be mildly disappointing: when a studio bothers with 7 sets of subtitles during both featured shorts, why not go the whole way? 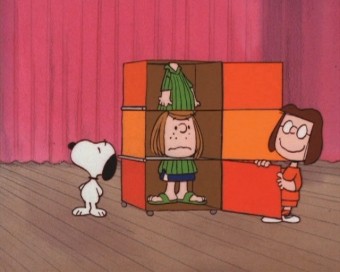 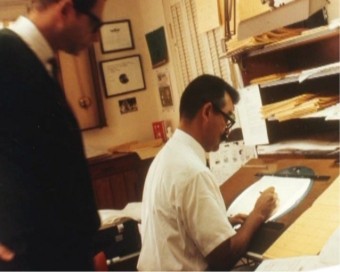 It's the Great Pumpkin, Charlie Brown is a genuine staple of American animation, offering a poignant and charming Halloween tale that we've seen and enjoyed countless times over the years. It's been eight years since the special's debut on DVD---and this new Deluxe Edition from Warner Bros. isn't fully loaded, but it marks a solid upgrade in just about every department. The technical presentation is nearly flawless (and hopefully, the rest of the catalog will follow suit), while It's Magic, Charlie Brown and a retrospective featurette round out this package nicely. A slightly more reasonable ticket price would've been ideal for roughly an hour of content---but when the content is this good, it's awfully hard to complain. It's the Great Pumpkin, Charlie Brown comes Highly Recommended to Peanuts fans of all ages, whether you own the 2000 Paramount release or not. Enjoy it!