First scheduled for release in 2006 as the 16th film in the Fox Film Noir series, Boomerang was recalled just before its street date.  (It was never officially stated why the film was pulled at the last minute, the most likely reason was a problem with the copyright.)  A few discs did make it out however, and those ended up going for a good amount on e-bay.   Now, two years later, Fox has finally released the film and Noir fans can determine for themselves if it was worth the wait.

One early evening the priest of a small town is brutally murdered on a main street in front of seven witnesses.   With the victim loved by the entire town, the citizens demand that the police make a quick arrest.  As the days turn into weeks however, and no suspects or even a motive can be determined, the local opposition party sees their chance.  Recently ousted from power by a group of civic minded reformers, the old political machine bosses would like to get back in power so that they can continue with the corruption that lined their pockets.  Using a local newspaper owned by the ex-mayor as their voice, they criticize the current administration and call them amateur politicians.  To stay in power, and keep the city clean, the murderer must be found. 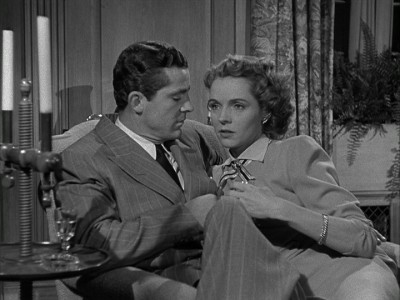 They do indeed find someone.  A drifter who was in the town at the time of the murder, John Waldron (Arthur Kennedy), was picked up one state over.  He not only matched the vague description that the witnesses provided, but had a .32 gun in his possession, the same caliber that was used in the murder.  The police keep Waldron up all night grilling him intensely, and though he says he had nothing to do with the murder after being deprived of sleep for untold hours, he signs a confession.  When the ballistics report comes back as a match and the witnesses all pick Waldron out of a line-up, it seems like an open and shut case.

State prosecutor Henry Harvey (Dana Andrews) is looking at an easy conviction, and with the killer of this high profile case in jail a possible run for the Governor's mansion.  Harvey knows how much this case means to the people in power, a party he fully endorses, but some thing just doesn't seem quite right.  He starts looking into the case against Waldron, though no one from the Mayor on down wants him too.  Could it be that Waldron is innocent? 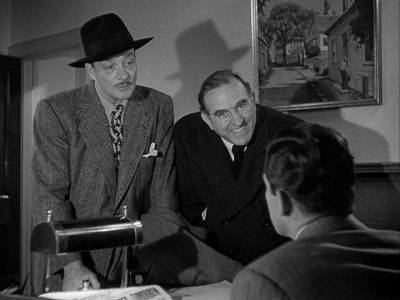 This early Elia Kazan film is equal parts courtroom drama and documentary.  Based on a real murder that took place in 1924, this 1947 film moves the date up a bit and changes some details, but more or less stays true to the events.  The drama comes not from good verses evil, but good verses good.  The current town leaders have cleaned up the corruption in the city government, spent money on improving the town for its citizens including the planned building of a park.  All of that will be lost however if the killer isn't found.  Waldron may very well be guilty too, the evidence, and not all of it circumstantial, certainly points to him.

The first two acts of the movie do a great job of setting the stage, and the final courtroom scene really brings the message home.  With a minimum of fuss and muss, Kazan paints a clear picture of the city's politics and the high price that is at stake.  This film is more than a simple drama however; the thing that raises it above other cop films of the time is the way that the movie indicts just about everyone involved.  The politicians want to keep their jobs, or cause their opponents to loose them.  They aren't interested in who actually committed the murder, they just want someone in jail.  The newspaper reporters' only desire is to stir up controversy and trouble in order to sell more papers.  Even the citizen's leagues are only interested in pushing their agenda and using the murder for their own ends.  No one, except the State Prosecutor, is interested in fairness or justice.  The movie hits all the more harder because of the introduction, where the narrator says that the events that are too occur could happen in any town in America. 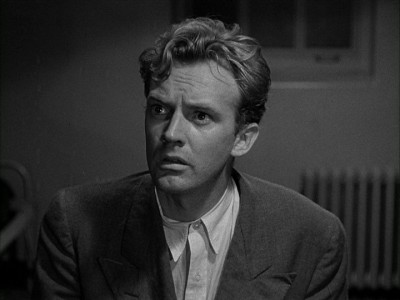 The acting is excellent across the board.  Dana Andrews plays his role just right, so you're not quite sure what he's thinking or how he's going to react.  Jane Wyatt is fine in her small part as Andrew's wife, but it's the supporting cast, consisting of such stalwarts as Cara Williams, Sam Levene, Ed Begley (Sr.), and Karl Malden who make this film seem authentic and real.

This movie comes on a single DVD.  The cover matches the other movies in the Fox Film Noir series and even keeps its original numbering, 16, on the spine.

The DD 1.0 mono soundtrack has been cleaned up and has no real problems.  The audio is clean and it isn't marred by background noise or distracting hiss.  The dialogue is easy to discern and the incidental music, what little there is of it, sound fine for a 1947 film.

The B&W full frame image preserved the movie's original aspect ratio and it looks fine.  There are a couple of spots of dirt on the print, most of them in the first reel, but the detail is fine and the level of grain looks natural.  The contrast is fine and the blacks are nice and deep.  A very nice looking film from over 60 years ago.

This disc also includes an informative commentary track by James Ursini and Alain Silver, who certainly know a lot about noir and this film.  This is my favorite type of commentary track, one by film scholars who can give the background details of a film as well as biographies of the major and minor players. The pair does all that and more.  Especially interesting is the section where they talk about Kazan naming people as possible communists to the HUAC investigations.  An excellent track that never gets boring.

There're also a still gallery and a theatrical trailer.

This send up of middle America disguised as a police drama works very well even today.  It's surprising that the film didn't cause an uproar when it was released, as it's really critical of American culture.  I suspect that most people thought that the police brutality and corruption depicted in the small town would never happen in their back yard.  It's great that Fox has finally released this classic.  It gets a strong recommendation.