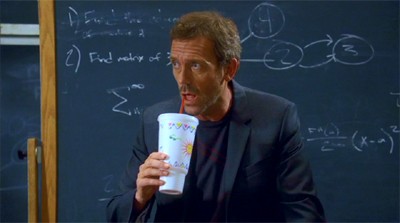 Since it landed on TV in 2004, House (or House M.D. if you will) has grown in popularity and has become a very successful property for the FOX Network. It started out with a decent showing but has garnered a strong fan-base over the years with a fifth season just around the corner. On DVD House has been a success as well with the first three seasons profiting from some nice sales and today we're looking at the fourth year for House and the gang.

In case you're unfamiliar with the show (IE: you live under a rock) let's fill you in, shall we? The series came together from the minds of David Shore and Bryan Singer and sought to explore the medical world in ways that stuff like E.R. and Chicago Hope never did. For a while TV became saturated with medical dramas and in all honesty I had been burnt out on them for a number of years. Thankfully when House landed on the airwaves it was immediately a different style of show and it brought fresh air into an otherwise stale genre.

At the center of the action in House is none other than Gregory House M.D. (Hugh Laurie). House is a cynic and a curmudgeon with a Rubix complex who has a unique view on life brought about by his somewhat tragic past and addiction to pain killers. Some time before the series began he suffered from a medical condition that left him on the operating table having a cluster of dead muscles removed from his leg. This left him with a constant supply of pain, Vicodin, and a limp for the rest of his life. I'm sure your outlook would be a tad askew if you were in his situation as well. Despite all of that though House is an absolutely brilliant diagnostician who assembles a team of doctors to solve medical mysteries and help people (while often taking jabs at them I might add). House is a unique show with an eclectic cast of characters, solid writing, and a concept that makes it feel like a medical version of C.S.I.

For the first three seasons the show moved along quite nicely and House's team of doctors had really begun to gel. By the end of the third season the writers determined that it was time to shake things up a tad though. In the closing moments three of the main characters either quit or were fired leaving House virtually alone in his role at Princeton-Plainsboro Teaching Hospital. Through this course of action the creators of the show were given something of a clean slate for the fourth season. Despite fears about its quality after such a dynamic shakeup I'm pleased to report that House is just about as good as you'd expect it would be.

When the season begins House is essentially all alone in his little corner of the hospital, which naturally is the way he likes it. Having never really been one to enjoy working with a team House is more than content to leave things the way they are but his boss won't have any of it. Forced to assemble a new crew House is struck with a bolt of brilliance; create a real reality TV show. House pulls together a slew of doctors and puts them through one rigorous task after another, firing them along the way and eventually witling the massive cast of more than thirty down to three. It's an entertaining process with some real highlights that the writers had fun with (spoofing Survivor and many others) but for my tastes it may have dragged out for a little too long. It takes roughly nine episodes for the team selection to wrap up though in between it's all highly entertaining.

With the new crew in place House takes on a slightly more energized feel though those familiar faces from the past three seasons are still kicking around in different roles. Throughout this season there are a variety of cases thrown at House and company that stump modern medical science. Just like the previous seasons you'll see conditions here that are rare, exotic, and mostly unthinkable. It certainly seems that the world around Princeton-Plainsboro is a hive for all of the bizarre diseases of humanity but it certainly makes for entertaining and original television regardless of that fact.

If you enjoyed the first three seasons of House then you'll appreciate the fourth for what it is; another solid outing for one of the most unique medical dramas on television. The shakeup of the cast actually helps more than it hurts and the set up for the fifth season is quite brilliant. All around this is another great installment for House and though it took a little while for the show to get moving I was hooked once it did. 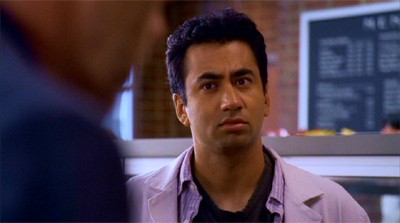 If you have been following House on DVD then you already know how Universal messed up the presentation of the first season. Thankfully the seasons that followed had corrected anamorphic widescreen transfers and the same can be said about the fourth collection. The presentation of the series here is been, in a word, breathtaking. House is one of the crispest looking shows you're going to find on television and on DVD the transfer does the material a great amount of justice. The picture quality here is no less than immaculate with vibrant colors, an appropriate amount of contrast, outstanding clarity, and no digital artifacts of any kind. With the high production values it's no surprise that the filming of this show is as good as it is but thankfully the standard definition DVD maintains the quality. This is arguably one of the better looking shows available right now.

Considering House is a dialogue driven medical drama the presentation of the audio could have been simplistic and still get by. Thankfully like the video quality, the sound department was no slouch and this show constantly raises the bar for itself and others like it. The Dolby Digital 5.1 rings through with clearly defined sound that uses the soundstage intuitively. From the front channels to the rear the sense of immersion created by House is quite good with a nice balance all around. There are no defects of any kind with this release and the audio is about as clean as you could expect.

Some bonus content is packed into this collection and is available on the fourth disc. Starting out is "House's Soap: Prescription Passion" (6:45) which is a hilarious collection of clips from House's favorite soap opera. It's a parody that hits the nail on the head with what you'd expect from daytime soaps. After that amusing diversion is "New Beginnings" (26:02) which is a fantastic look at the creative process of putting together the fourth season's new cast. This is definitely one to check out when you're done watching the season though because there are some spoilers scattered throughout.

"Meet the Writers" (14:46) is basically what it sounds like. This extra offers commentary from some of the writers of the show as they talk about the process of scripting to what you see on television. Along the same lines, but skewed towards the visual nature of the show rather than the written, "The Visual Effects of House" (15:28) offers a discussion about the look of the show and how it's put together. With regards to more special effects "Anatomy of a Scene: The Bus Crash" (5:47) examines how a pivotal moment of the season's finale was constructed.

"My Favorite Episode So Far..." (6:48) is one of the lighter features but it offers a nice insight into what the cast and crew feel are the finest moments of the show. Stepping it up and closing out the bonus features section is an audio commentary for "House's Head" with David Shore and Katie Jacobs. One thing I want to note about this commentary is that David and Katie have a good amount of chemistry that lends itself well to discussion of the show. Often times with commentary tracks you'll have commentators awkwardly piece together thoughts about what's happening on screen but there the pair offers a coherent and insightful view of the proceedings about the season's finale. 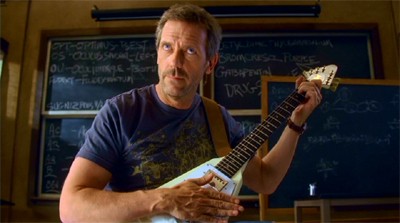 House is a great show and it's arguably one of the finest medical dramas ever to grace television. We can only hope that the quality stays true for the fifth season but in the meantime the fourth is a fantastic season to spend some time with. The shakeup of the cast works towards the show's favor and watching the script unfold for the whole season is remarkably entertaining. If you enjoyed the first three season then by all means check this one out but if you haven't seen the show yet, do yourself a favor and pick up all four; you'll be glad you did!