Warner Bros. // R // August 26, 2008 // Region 0
List Price: $28.99 [Buy now and save at Amazon]
Review by Stuart Galbraith IV | posted September 9, 2008 | E-mail the Author
Clint Eastwood's Pale Rider (1985) received a lot of negative reviews when it was new, many calling it a pale reworking of the classic Western Shane (1953). Some of that criticism is deserved, some not. Not counting the criminally underrated Bronco Billy (1980), a charming Western comedy in modern dress, Pale Rider was Eastwood's only straight Western between The Outlaw Josey Wales (1976) and Unforgiven (1992), both excellent films. If there had been any doubt, Unforgiven guaranteed Eastwood the director immortality as a major Western auteur, as well as its only major star since the death of John Wayne.

When Pale Rider was released, however, the movie Western was just about at its lowest ebb. Twenty years before, when Eastwood was starring in Sergio Leone's For a Few Dollars More, more than 50, perhaps closer to a hundred Westerns were released in 1965 alone, including such films as Cat Ballou, The Hallelujah Trail, Major Dundee, Shenandoah, and The Sons of Katie Elder. By 1985, the number of Westerns could be counted on one hand: Lust in the Dust, Rustlers' Rhapsody, and Silverado were the other contenders, all send-ups of varying degrees.

Pale Rider is a hodgepodge of ideas tackled better elsewhere, but it also has many extremely fine elements: some excellent performances and especially superb cinematography by Bruce Surtees, who shot most of Eastwood's '70s-mid-'80s movies, and who should have won numerous awards for his work on this. To say previous home video versions did the movie an injustice would be an understatement. Even in 16:9 enhanced format on DVD, Pale Rider looked flat-out ugly. The film was always on the grainy side, but now Warner's Blu-ray disc draws out all of Surtees's subtleties, visible for the first time since its theatrical release, especially the delicate color palate of fall and winter colors. The DNR is minimal, thank goodness, and the film grain doesn't overwhelm the film like past home video editions. 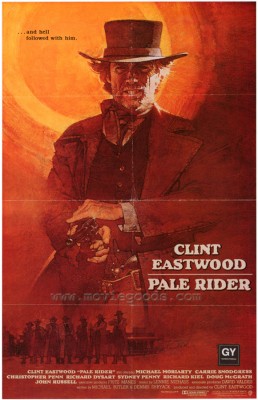 Pale Rider liberally borrows its story from Shane, Eastwood's character from High Plains Drifter (1973), and to a lesser extent some visual concepts and scattered ideas from Seven Samurai. During the California gold rush a small community of panning miners are being threatened and harassed by employees of Coy LaHood (Richard Dysert) to the point of abandoning their claims so he can take over their potentially gold-rich land with his hydraulic mining outfit.

A mysterious drifter (Eastwood) comes to the rescue of one especially stubborn miner, Hull Barrett (Michael Moriarty, very good), while the tin-panner is being beaten by LaHood's thugs. Hull invites the apparent gunfighter to join the community, to stay with Hull's fiancée, Sarah (Carrie Snodgress) and her daughter, Megan (Sydney Penny). Sarah is initially reluctant to let a gunman in the community, but then all get a big surprise: the stranger shows up for dinner wearing a preacher's collar.

Emboldened by Preacher's encouragement, the miners dig in while LaHood calls on gun-for-hire "Marshal" Stockburn (John Russell) and his six "deputies" to clear out the miners once and for all.

Pale Rider is a real mixed bag of a movie. At its worst it treads Shane's familiar path all too obviously. Quoting Wikipedia:

A stranger (Shane/The Preacher) arrives in a town and is hosted by a local (Joe Starrett/Hull Barret), his wife (Marian/Sarah) and their child (Bob/Megan). The stranger and the local bond when they take on an "impossible task" together (undermining a root/cracking a boulder). But the local's land and his friends' is in peril by a greedy businessman (Fletcher/LaHood).

The stranger fends off an initial advance and gains one of the businessman's henchmen (Chris/Club). The local's child falls for the stranger, but is rejected at first. The stranger is made to relive his past when the businessman calls for an assassin (Stark Wilson/Stockburn)....

There are other problems, too. In an opening raid Megan's beloved dog is heartlessly shot dead by one of the raiders, but in one shot it's painfully obvious the supposedly dead critter is stuffed and rigid as a statue, maybe the most outrageously fake such incident since Robert Vaughn carried around a stuffed deer in Teenage Caveman. The raid is preceded by a showy but completely illogical montage cutting between the peaceful miners, unaware of what's about to happen to them, and the raiders riding at full gallop. For what looks like 20 miles. Wouldn't it have made more sense to sneak up on them? Weren't their horses tired?

Some of the action sequences - the Preacher's pummeling of the men with a piece of hickory, the climatic fight with the deputies - are outrageous and darkly comic in the manner of Eastwood's contemporary thrillers, at times unbelievable. (Why do LaHood's thugs waste all their bullets shooting at stationary kitchen plates?) Doug McGrath's character all but wears a sign around his neck reading "Future Victim," in a sequence painfully overplayed and the most direct rip-off from Shane.

Eastwood reportedly stated in interviews at the time that his character is supposed to be a ghost: he inexplicably has five healed bullet wounds on his back that should have been fatal, for instance, but it's all rather muddled when compared to Eastwood's similar character in High Plains Drifter, a truly mesmerizing, subtle characterization.

On the plus side, the cast is quite good, including Eastwood. Michael Moriarty was not an obvious choice for his role, yet he's entirely believable and sympathetic. With her prematurely careworn features and sensitive qualities beneath an outwardly tough veneer, Snodgress was another good casting choice. Maybe the most inspired casting though was John Russell as Stockburn, a role thankfully not played like Jack Palance in Shane. Russell had starred in the popular but now largely forgotten Western TV series Lawman at about the same time Eastwood was doing Rawhide. Ten years Eastwood's senior, Russell is imposing with a weighty Western face (he would've made a great Wyatt Earp). Almost unique in Eastwood's films, he's a villain that's absolutely an equal counterpart, maybe the best such character since the days of Lee Van Cleef.

And, despite its many flaws, the film is sincerely made and aims high even if the screenplay isn't operating at the same level as the performances and cinematography. It's still a very interesting film to watch, and now on Blu-ray it's also quite beautiful to look at.

Pale Rider was photographed in Panavision with original theatrical prints by Technicolor in Dolby Stereo. I have a hunch the transfer may be several years old, as it exhibits some problems that might not have occurred had it been mastered recently. The first few reels are unsteady, and this causes some images to float off the screen like older standard DVDs, though not nearly as extreme. This is most obvious at the nine-minute mark, where some tree bark seems to be floating several inches above the tree, like a puck in air hockey. Beyond that though the 1080p 2.40:1 image will be a revelation to many, even those who were unimpressed during its 1985 release. Virtually the entire film takes place outside in the wilderness, where the HD image picks up all the gorgeous scenery, individual leaves, etc., while the dark interiors (where light is pretty much limited to what's coming through the windows) are complemented by the format's handling of the deep blacks and shading.

The audio is understated but effective, in TrueHD 5.1 and Dolby Digital 5.1, as well as mono tracks in French, Spanish (Castilian and Latin), German, Italian, and Japanese, along with optional subtitles in all those languages plus Dutch, Danish, Finnish, Norwegian, Portuguese, and Swedish. The disc is all-region. (On my Japanese Blu-ray recorder it defaulted to Japanese language menus.)

The only supplements, in 16:9 enhanced standard definition, are trailers for this and Unforgiven. The trailer for Pale Rider hasn't a clue how to sell the film.

Despite all my bellyaching I'm rather fond of this semi-orphaned film, flaws and all. I didn't care for it much when it was new, but since then it's grown on me little-by-little, and the Blu-ray does it justice. Recommended.


This month Stuart Galbraith IV celebrates his 5th Anniversary at DVD Talk. You can read the very first review here.