Marco Ferreri, arguably the greatest Italian satirist to ever step behind the camera, has received a lavish treatment through North American distribs Koch Lorber Films who have put together an elaborate 8DVD set containing some of the director's best works. A majority of these works are making their first ever appearance on DVD in an English-friendly form.

El Cochecito (1960) - Don Anselmo, an aging scoundrel with a razor-sharp mind, desires a brand new motorized wheelchair. He is the only kid on the block without one. Can he trick his son, an affluent lawyer, to buy him one? (Starring José Isbert, Pedro Porcel, and José Luis López Vázquez).

Il Seme dell'uomo a.k.a The Seed of Man (1969) - The end of World War III, the world is devastated. A young couple must determine whether or not having a child would be considered an act of cruelty. The more the couple attempts to make a decision the more they fail to rationalize their motives. Old clichés about the two sexes reappear. (Starring Marco Margine, Anne Wiazemsky, and Annie Girardot).

La Grande Bouffe (1973) - An affluent party of bored snobs move into a secluded Parisian mansion where they plan to eat themselves to death. They also hire a group of prostitutes to add flavor to their bizarre celebration. (Starring Marcello Mastroianni, Michel Piccoli, Philippe Noiret, and Ugo Tognazzi).

Touche pas à la femme blanche a.k.a Don't Touch the White Woman (1974) - A vile critique of the American society and its value system the film follows the deeds of General Custer on the streets of Paris where a beautiful woman will fall in love with him. (Starring Catherine Deneuve, Marcello Mastroianni, Michel Piccoli, Philippe Noiret, and Ugo Tognazzi).

Ciao maschio a.k.a Bye Bye Monkey (1978) - In the heart of rat-infested New York City two foreign eccentrics ponder the meaning of life. The first has secured a job with a group of aspiring female performers looking to stage a play about the consequences of rape while the second has chosen to live in a secluded house on the outskirts of the city. During a trip to the beach they discover the corpse of King Kong. (Starring Gérard Depardieu, Marcello Mastroianni, James Coco, and Geraldine Fitzgerald).

Chiedo asilo a.k.a Seeking Asylum (1979) - A passionate teacher plans to change the world he lives in. His first target is a school in a risky area of Bologna. (Starring Roberto Benigni, Francesca De Sapio, and Dominique Laffin).

Tales of Ordinary Madness (1981) - A film based on Charles Bukowski's beat classic: "Erections, Ejaculations, Exhibitions and General Tales of Ordinary Madness". The story follows the deeds of an eccentric poet who falls for a beautiful prostitute while trying to make ends meet on the backstreets of Los Angeles. (Starring Ben Gazzara, Ornella Muti, and Susan Tyrell).

La Casa del sorriso a.k.a The House of Smiles (1988) - An older woman attempts to survive the suffocating environment of a retirement home where love is nowhere to be found. (Starring Ingrid Thulin, Dado Ruspoli, and Enzo Cannavale).

There is hardly a controversial theme the films of Ferreri left unaddressed during the years. From sex and human degradation (La Grande Bouffe) to politics (Don't Touch The White Woman) to sexual emancipation (La Cagna) to freedom of expression (Tales of Ordinary Madness) Ferreri was always an outspoken experimentalist whose works were always greeted with excitement. Aside from his fellow countryman Pier Paolo Pasolini whose political rhetoric went even farther causing moralistic watchdogs around the world to go belly up Ferreri represented everything serious film directors aspired to be - great visionaries, experimentators, and terrific storytellers. 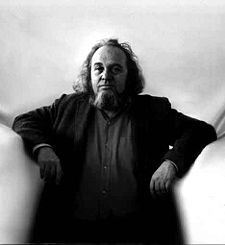 Social and political overtones are typically the foundation for Ferreri's colorful and exotic stories whose primary function is to take the viewer out of its comfort zone. Through impressive exaggerations (Bye Bye Monkey) for example Ferreri criticizes just as well as he satirizes. His protagonists are neither perfect nor believable yet they tend to suffer from "ordinary" social diseases that always find a way to resonate with casual viewers.

Furthermore, Ferreri's often controversial forays into the bizarre and scandalous (La Grande Bouffe) are never a pointless exercise in nihilism. Each and every extremity carries a message which decoded in a larger context is far more serious and complex than it may initially seem. As a result Ferreri's polemic has been far more effective and generally disturbing than that of other directors who have attempted to be as scandalous but have failed to deliver in their films what matters the most - a meaningful message.

Not surprisingly during the years Ferreri created great friendships with some of Europe's most esteemed actors - Marcello Mastroianni, Michel Piccoli, Philippe Noiret, Catherine Deneuve, and Ugo Tognazzi who admired his talents as much as he admired their acting skills. Logically, Ferreri became a marquee name whose dominating appeal amongst the critics was also undisputed.

From Spain (El Cochecito) to Italy (Dillinger è morto) to France (Le Harem) to the United States (Tales of Ordinary Madness) Ferreri's films always spoke a language audiences with different cultural backgrounds found fascinating, impossible to resist. Whether it was his unceremonious satirizing of Franco's regime (El Cochecito) or a misleading futuristic plethora where the two sexes were left battling old cliches (The Seed of a Man) the Italian director was always successful at achieving the perfect balance between style and substance. His films revealed our vices and weaknesses in a manner that was both sad and funny, tragic yet entertaining.

Finally, the films provided in this terrific boxset by Koch Lorber Films capture Ferreri's evolution as a director magnificently starting with his Spanish period (El Cochecito) then moving to his peak years (La Grande Bouffe) and finally reaching his more personal and intimate works that appeared during the late 80s (The House of Smiles).

As I mentioned earlier a lot of the films in this 8DVD boxset arrive to English-speaking viewers for a very first time and fortunately for us the quality of the prints here ranges from good to very good. With the exception of El Cochecito which is presented in its original aspect ratio of 1.37:1 the rest of the films in the Marco Ferreri Collection are all enhanced for widescreen TVs. The aspect ratios appear as follows: Tales of Ordinary Madness (1.66:1),The House of Smiles (1.66:1), Don't Touch the White Woman (1.66:1), Seeking Asylum (1.78:1), La Grande Bouffe (1.66:1), Bye Bye Monkey (1.78:1), and The Seed of a Man (1.66:1).

None of these prints in this boxset have undergone a full-blown restoration. Nevertheless they are acceptable and on par with has been released overseas (La Grande Bouffe for example reveals the same wear and tear seen on the disc Nouveaux Pictures released in the UK). Furthermore, the overall quality of the rest of the prints is comparable to Infinity Arthouse's release of Le Harem - there is certainly room for improvement but given how Ferreri's work has been treated even in Italy (La Cagna) what Koch Lorber Films have delivered is certainly passable. The actual transfers are not direct PAL-NTSC ports though occasionally some of them come rather close to revealing mild "combing" patterns (Seeking Asylum) which those of you who are familiar with Koch Lorber Films and their output by now probably know is something that more or less we have to accept. As far as debris and scratches are concerned, yes, such appear on most every print but once again I would like to point your attention to the fact that fully-restored prints of Ferreri's films are not available in any region and I personally expected such minor specs to pop up here and there. This was the case with the UK and Italian R2 discs of Ferreri films I have so this isn't an unexpected occurrence. Still the fact that these R1 discs are anamorphically enhanced and watchable is quite a revelation (and believe me this is indeed the case as I have practically everything that has been released in an English-friendly form from around the world).Finally, there is a bit of macro-blocking and edge-enhancement that some of you with larger and more sensitive set-ups may find to be mildly annoying but it is what it is, at least we can finally have these films in our collections.

This 8DVD set arrives with an excellent 16-page booklet containing a nice essay by Jacqueline Reich titled" Marco Ferreri - A Feast of Images" which attempts to shed some light on why the Italian director's work has not been widely available in the US. In addition, the booklet contains wonderful photos from the films found in this collection. The only other supplemental materials available in this set are on the disc for El Cochecito. On it you will find an old Italian documentary titled "The Director Who Came from the Future" where Ferreri spends a great deal of time deconstructing his work. Next, you will find another old interview dating all the way back to 1996 in which Ed Grant talks with Ferreri about his characters and his films in general.

It took me a long time to go through this magnificent collection of Marco Ferreri works Koch Lorber Films have provided for the American market. To make a long story short this 8DVD set is undoubtedly one of the most important releases I've added to my library in a very, very long time. Yes, there are some issues with the prints but I urge you to look at the bigger picture and consider what Koch Lorber Films have actually done - they have given English-speakers full access to films that are absolutely impossible to see in an English-friendly form no matter what market you wish to explore. I've done my fair share of research and a lot of the films in this boxset were a challenge I never managed to address. To put it simply they are impossible to find on DVD. Yes, some of them began appearing elsewhere but I personally am more than thankful that Koch Lorber Films managed to secure the US rights for these films. I strongly encourage you to add them to your collections. Highly Recommended.