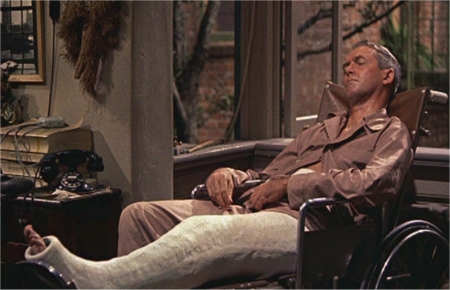 I may not have seen every Alfred Hitchcock film in the director's acclaimed back catalogue, but I have yet to see one that tops Rear Window (1954). This tightly-wound tale of suspense, voyeurism and murder reaches far beyond its deceptively small environment, creating a potent experience that stands up to virtually unlimited viewings. Based on a 1942 short story by Cornell Woolrich, Rear Window revolves around L.B. Jeffries (James Stewart), a photographer confined to his New York apartment with a broken leg. Only one week remains until his plaster cast is due for removal---and in the midst of a sweltering heat wave, it couldn't come any sooner. Torn between his love of adventure and the big-city life of his girlfriend Lisa Fremont (Grace Kelly), Jeffries whittles the days away by sleeping, chatting with his physical therapist Stella (Thelma Ritter), and casually observing the apartments nearby. "Miss Torso" is a gorgeous young lady with plenty of admirers. A young newlywed couple spends their amorous first days (and nights) together. There's even a struggling songwriter who works tirelessly on his next masterpiece.

A cursory glance doesn't reveal much of great interest, save for an invalid woman across the way. She's in need of constant attention and nags to get it, while her salesman husband Lars (Raymond Burr) serves as caretaker...and a prime suspect, after her sudden disappearance. Jeffries takes his potential paranoia one step further by enlisting the help of Doyle (Wendell Corey), an old Army buddy who's now a detective---but after a bit of off-duty digging, they discover nothing more than a solid alibi and a formidable stack of witnesses. Jeffries doesn't give up easily, though: as a seasoned photographer with an eye for the unusual, he continues to spy on Lars with the benefit of binoculars and a long camera lens. With his wife absent, would the salesman finally leave town for good...or is there nothing more to the story than a train ticket and a nosy photographer?

Mystery or not, Rear Window works perfectly as a flat-out suspense story and a confirmation of our voyeuristic tendencies. Most of us like to watch, whether it's a quirky conversation between two strangers, a crime scene or a simple roadside accident. We're simply too curious for our own good---and to the film's credit, it doesn't sternly reprimand us for this curse. Viewers can simply accept it as fact on principle alone, if only because our spying tendencies come so naturally: we're already watching a story unfold, but Rear Window simply magnifies the effect by a few degrees. In simplest terms, we're watching the story unfold along with Jeffries, and that's precisely what makes Rear Window so engaging on a basic level: we've been designed to draw ourselves to it. 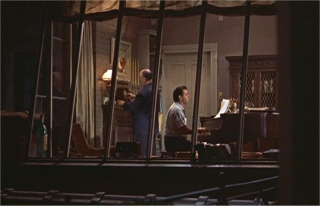 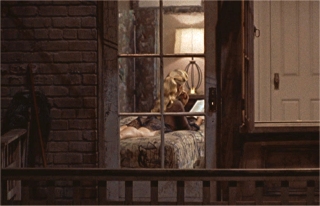 Perhaps the film's greatest strength, though, is its impressively focused visual design. Those new to Rear Window will understandably approach it with some caution; after all, how could a movie with such a limited scope remain interesting from start to finish? As in many of Hitchcock's films, it's the little details that tie everything together perfectly: from carefully planned point-of-view shots to the film's creative use of natural---and in some cases, manipulated---sound design, the captivating atmosphere and intrigue of the story is what draws us in and holds us there. Unexpected doses of comedy and genuine dread are balanced perfectly, keeping us off-balance during the duration of the picture. From start to finish, Rear Window is simply a film that's more than the sum of its parts: everything fits together so naturally that it's practically non-fiction. Whether you've yet to see the film or have viewed it frequently during the last 50-odd years, Rear Window delivers the goods each and every time.

Originally released in 2001 by Universal as a Collector's Edition and again by the studio as part of a 14-film "Masterpiece Collection" boxed set, Rear Window arrives again as a part of Universal's Legacy Series line of classic titles. This two-disc set boasts a strong technical presentation (which may or may not be identical to the Masterpiece Collection release), while a number of brand-new bonus featurettes have been added to the mix for added value. It all adds up to an extremely polished release with an attractive price tag, making this an easy choice for Hitchcock fans of all experience levels. Let's take a closer look, shall we?

Presented in its original 1.66:1 aspect ratio and enhanced for 16:9 displays, Rear Window looks much improved over Universal's own 2001 Collector's Edition (since I don't own the Masterpiece Collection release, it's unknown whether that boasts the same transfer or not). In any case, what we get here looks quite impressive: there's a healthy dose of natural film grain, the earthy color palette looks good and image detail is much improved. Minor flecks of dirt and a few other hints of print damage can be spotted along the way, but these are undoubtedly due to the source material. Below are a few screen comparisons between this new release and the Collector's Edition, which should certainly speak for themselves.

Audio purists will be glad to know that the Dolby Digital Mono soundtrack (available in English or French) hasn't been monkeyed around with, keeping in perfect tone with the film's insular atmosphere. Some of the high end seems a bit on the harsh side---but like the video presentation, this is likely due to the deterioration of the source material. Thankfully, optional English SDH, French and Spanish subtitles are included during the main feature and all bonus content. 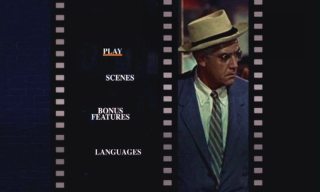 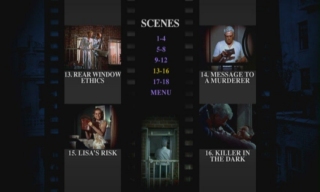 Seen above, the moody menu designs are basic and easy to navigate. The 115-minute main feature has been divided into 18 chapters, while a somewhat awkward layer change was detected right after the 58-minute mark. This two-disc release, like others in Universal's Legacy Series, is housed in a handsome digipak case; also inside is a promo booklet for Turner Classic Movies and upcoming releases.

Bonus Features
Spread over both discs, this Special Edition includes all the extras from the 2001 Collector's Edition and adds a few for good measure. The original bonus features lead off with "Rear Window Ethics" (55:09, below left), featuring retrospective comments by Georgine Darcy ("Miss Torso"), assistant director Herbert Coleman, daughter Pat Hitchcock O'Connell and other directors including Peter Bogdanovich, Curtis Hansen and others. A portion of this documentary is devoted to the restoration done for the 2001 Collector's Edition; though the transfer quality shown is already dated, it's presented here for posterity's sake. Also returning is an Interview with Screenwriter John Michael Hayes (13:11) filmed in 2001, in which the writer shares a handful of interesting production stories. The returning extras conclude with a few pages of Production Notes, a slideshow of Behind-the-Scenes Photos and Promotional Material (3:08), the overly dramatic and long-winded Theatrical Trailer (2:42) and the Re-release Trailer (3:39) narrated by James Stewart.

The new bonus features start with a feature-length Audio Commentary by author John Falwell ("Hitchcock's Rear Window: The Well-Made Film"), who contributes an entertaining and informative track. This isn't so much a technical tour de force as a purely visual-minded discussion, in which the well-spoken author points out details carefully chosen by the celebrated director. Though this occasionally translates into "narrating the action" during a few segments, Falwell also incorporates plenty of details about the actors, original story and the enduring influence of Rear Window. Fans will certainly find this commentary track worth a listen; in short, it magnifies the film's strengths and entertains us while doing so.

Next up are two featurettes: "Pure Cinema: Through the Eyes of the Master" (25:12) and "Breaking Barriers: The Sound of Hitchcock" (23:31), which serve as general overviews of Hitchcock's visual and sonic prowess. Featuring comments by the likes of Martin Scorsese, John Carpenter, William Friedkin, Guillermo Del Toro, Gary Rydstrom and many more, these new featurettes highlight the director's strength in editing, visual precision, use of montage, perspective, music placement, sound manipulation and many other cinematic techniques. Though they could've found homes on any of Universal's upcoming Hitchcock re-releases, both are certainly fitting partners for the intensely focused Rear Window. 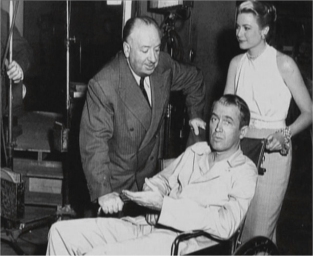 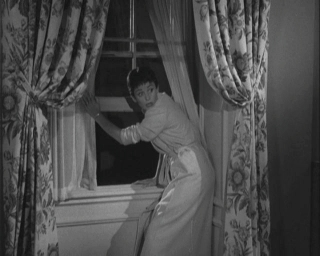 Next up are Interview Excerpts with Hitchcock and director François Truffaut (16:16); recorded in 1962 and intermittently translated by Helen G. Scott, this back-and-forth conversation provides a general overview of the film's style and influence. It has a tendency to repeat both itself and some of the other bonus features included here, but classic film fans should certainly enjoy the pairing. The optional English subtitles will certainly come in handy here; Hitchcock's dry style of speaking is intensified by overlapping translation of the dialogue on both sides. In any case, this interview is worth digging through.

The final extra here is an episode of Alfred Hitchcock Presents: "Mr. Blanchard's Secret" (26:17, above right), originally broadcast on December 23, 1956 during the series' second season. This entertaining episode focuses on a mystery writer who becomes increasingly fixated on her next-door neighbors after spying out the window. It obviously owes a great deal thematically to Rear Window and fits in neatly here---so unless you already own Season 2 on DVD, you'll appreciate having this extra on board.

All bonus features are presented in 1.33:1, letterboxed widescreen and 16x9 enhanced formats; again, each and every one includes optional English subtitles. Kudos to Universal for their consistency in this department!

As tightly-wound and suspenseful as ever, Alfred Hitchcock's Rear Window remains one of the director's true crowning achievements: it's a perfect marriage of style and substance, punctuated by fantastic performances, a strong pace and once of the most memorable third acts in film history. Those new to Hitchcock's back catalogue will find Rear Window immediately accessible and engaging; it works on a number of levels, either as a straight suspense film or a clever commentary on our own habits. Universal's two-disc package offers a strong improvement over the 2001 Collector's Edition, boasting a solid technical presentation and a host of new bonus features. Owners of the previous release will find this worth the upgrade, while those who don't own Rear Window on DVD yet are strongly encouraged to seek out a blind buy. A nearly-perfect effort all around, this fantastic release is worthy of our highest rating: DVD Talk Collector Series.