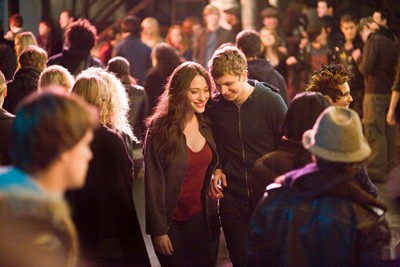 So, Nick and Nora really like their martinis, right? I mean, really like them. You could say they are living the high life on highballs. That is, until this murder happens, and Nora decides that it would be fun to try to solve it. The murder victim is this really thin guy, and they call him the "the thin man," which a lot of people think is actually a nickname for Nick but that's not true. And--

Wait, wait, wait. Wrong movie. I'm supposed to be talking about Nick and Norah's Infinite Playlist. That's Norah, with an "h." Maybe I'm the one who should lay off the highballs.

William Powell and Myrna Loy have been dispensed with, and they are now replaced with Michael Superbad Cera and Kat The House Bunny Dennings, two cute kids who like to party themselves, so they're all right. Except they are both straight edge, which means neither of them drink, so they aren't exactly the same. Maybe that's why authors Rachel Cohn and David Levithan picked those names when they wrote the young adult novel the movie is based on, they were being ironic. Like naming a killing machine in a war movie "Gandhi."

Anyway, so yes, Nick and Norah's Infinite Playlist was a book and now it's a movie, adapted by first-time screenwriter Lorene Scarfaria and director Peter Sollett (Raising Victor Vargas). It's a totally cute but wholly inoffensive relationship film for teens, and the chemistry between Cera and Dennings is so good and the writing so sweet that it's pretty hard not end up with a smile on your face even as you roll your eyes. Nick is an emo kid who is pining for his lost love, a total skeez named Tris (Alexis Dziena, who played Lolita in Jarmusch's Broken Flowers). He hides in his room and leaves her long, sad voicemails and makes her mix CDs to tell her he misses her. She tosses the CDs in the trash, where they are fished out by her schoolmate, Norah, who thinks Nick has the best taste in music ever.

Cut to later when Norah and her lush of a friend Caroline (Ari Graynor) are in a NY club checking out Nick's band, a queer punk outfit where he's the token straight bass player. As fate would have it, Norah is totally attracted to sad little Nick, but she has no idea that he's Tris' mixtape king. Thus, it's a matter of fate that, in order to prove to Tris that she can get a guy, Norah walks up to Nick and plants a kiss on him. The rest of the night is spent chasing after their favorite band (they are playing a secret gig somewhere in the city and finding them involves following clues), trying to track down the drunk Caroline, and generally struggling to unhook themselves from their respective hang-ups. Nick has to get past Tris, and Norah has to get over being the daughter of a famous music impresario as well as dropping her lame semi-boyfriend Tal (a marvelously douchey Jay Baruchel). It's a good time, watching the kids run through the city, where they always find a parking space and never really run across anyone that is all that threatening in any way. (SNL-cast member Andy Samberg tries to be the crazy threatening guy in one cameo, but his main threat is that one day he will be funny. I'm still waiting for him to carry through with that.)

There isn't much more to it than that. All of the actors are very good, with Ari Graynor winning the MVP award for her spot-on comedic drunkenness. Michael Cera pretty much is sticking to the Paulie Bleecker bit he did for Juno, but I'm not really tired of it yet, so that's all right, too. He has the best lines in the movie, and a lot of them sound like they were either improv or Scarfaria has a really good ear for his delivery style. Nick's bandmates, played by Rafi Gavron and Aaron Yoo, are also fantastic, bringing the right kind of nerdy confidence to the screen to make them believable as Michael Cera's pals. The casting director really deserves extra kudos for those two.

All in all, Nick and Norah's Infinite Playlist whizzes by and entertains as it does, but it's not entirely memorable. From the bland songs that make up the soundtrack to the pedestrian direction (Sollett should work on his comic timing, particularly with more physical scenes), it's all a little easy and carries a whiff of vanilla. Teens will probably like it for its unfettered emotionalism, but anyone with a passing knowledge of these kinds of date movies shouldn't expect any surprises. It is what it is, and thankfully, that's good enough--but only