Picture of Dorian Gray, The 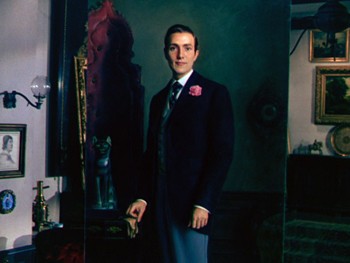 When I was in high school, I would videotape movies off of TV all the time. I had TNT in my room then, back when TNT was what we call Turner Classic Movies now, and I knew their schedule backwards and forwards, mapping out when I could tape which movies when, building a library of classic films, my first gropings in my frenzied love affair with cinema. I had one tape that had both John Huston's The Maltese Falcon and Albert Lewin's 1945 production of The Picture of Dorian Gray on it, and that cartridge was in my machine far more often than any other. It became my ritual to play it when I went to bed, letting the movies run until I fell asleep, and then picking them up at bedtime the next day where I had stopped them the night before.

Lewin, who may be best known for directing Pandora and the Flying Dutchman, had a slightly different take on Oscar Wilde's hedonistic lothario than is generally gleaned from the text, as I would later discover, but I was captivated by the cold, disassociated performance of Hurd Hatfield as Dorian. Here was a man of great beauty granted his fondest wish, to live life as he saw fit, completely free of aging or the physical damage of sin, his every misdeed visited on a painted portrait of him instead, and yet, he seemed to enjoy none of his indulgences. Granted, we see very little of the party animal on the prowl, we mainly see him afterwards, stalking his opulent home as if it were a cage, worrying over the state of the soul he had surrendered. It was as if by eradicating the risk of consequence, he had sucked all of the fun out of being bad. Like the old wives' tale of cats sucking the milky breath from babies, the Egyptian cat statue that Lewin implies was the charm that enchanted Dorian and his canvas-bound likeness has drawn the pleasure from the opiate-laced breath of indiscretion.

I've waited many years for The Picture of Dorian Gray to come to DVD, that worn VHS long since retired, especially after I discovered that my taped version was lacking the Technicolor inserts of Dorian's painting. At three important instances--the portrait's initial unveiling, the later revelation of its deformed state, and the final reckoning--Lewin cuts from the black-and-white photography, the morally gray landscape of the rest of the film, to show us the full-color realities of purity and corruption. These are shocking revelations, like an explosion. The paintings were created by Ivan Albright, an artist whose previous work, which tackled themes of death, decay, and material corruption, made him perfectly suited to pull off the impossible and create the images that Wilde had so vividly imagined in his prose. (The look of the ravaged Dorian reminds me of the more contemporary art of Glenn Fabry, best known for his covers for the comic book series Preacher.) 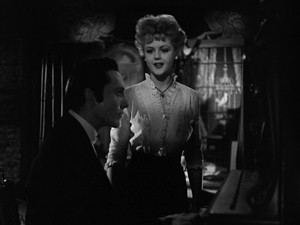 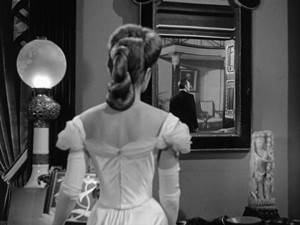 Beyond the color shots of the painting, I was able to appreciate Lewin's visual mastery even more than I ever had. The frequent gallows imagery, the recurring visions of chivalric knights, the childhood accoutrements that hide Dorian's shame, and the almost surreal, intentionally fake look of many of the constructed sets (particularly the aerial shots of the opium den Dorian frequents)--all of these were things I was unable to appreciate as a teenager, though I am sure that, without my realizing it, The Picture of Dorian Gray laid much of the foundation of my current understanding of visual storytelling. Cinematographer Harry Stradling, Sr., who went on to shoot social dramas like A Face in the Crowd and colorful musicals like My Fair Lady, won an Oscar for his cinematography in Dorian Gray. His use of deep focus photography is perfect for Lewin's vision of Dorian's life as a collection of objects, boosting the notion that outward symbols convey inner turmoil. One can't help but think of Orson Welles and his cluttered sets, particularly the collection of junk accumulated by Charles Foster Kane. The Picture of Dorian Gray is put together in much the same way.

Another aspect I am able to appreciate more is the wit of Lord Henry Wotton, the Wilde stand-in played by George Sanders. The actor's droll delivery is perfectly suited for the ironic bons mots the character is always doling out, influencing the younger Dorian to be the libertine and quite possibly carry out actions that are only theories or jokes to their originator. Wotton represents the world of thought, of imagined transgression, whereas Dorian puts those thoughts into practice. A greater romantic possibly lies behind Wotton's cynical wit than he would ever let on, perhaps revealed in his approval of Dorian's engagement to Gladys Hallward (Donna Reed), the niece of the artist (Lowell Gilmore) who painted the cursed portrait. Whereas Wotton once encouraged Dorian to trample on the purity of his first love, the singer Sybil Vane (Angela Lansbury), they both also vied for the affection of Gladys when she was but a little girl, and Gladys' status as a symbol of unconditional love goes undisputed.

Oscar Wilde fans will, of course, have reason to grouse in regards to deviation from the text, but as with the best literary film adaptations, Lewin's The Picture of Dorian Gray works because it is neither a rigid recreation of the book nor a complete divorcement from it. The movie version evokes the text, while still being free to be very much its own thing. Lewin draws out the overtones of horror from the story while also emphasizing the philosophical and spiritual undercurrents. It's a lovely portrait in and of itself, and like the painted image of its main character, it begins with something real and moves into the realms of the unreal, taking the audience through veils of mysticism and morality they might not otherwise be able to witness. This chilly, cinematic Dorian Gray is as haunting and vivid as I remember, but with added rewards for the repeat viewer willing to dip back in as he or she accumulates wisdom and experience from a life well-lived. 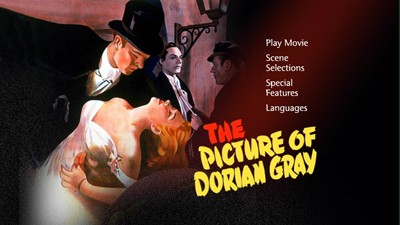 Video:
Unfortunately, while the movie holds up to my memory of it, the image quality of this DVD is not on par with what one could hope from a release for a classic motion picture. The full frame transfer suffers from frequent scratches and spots, as well as fuzzy edges that are most apparent in the bright scenes. The blacks are actually not too bad, which is good since this is a dark movie, but the final confrontation between Dorian and his portraitist, Basil Hallward, is shockingly patchy. If I had to hazard a guess, the DVD was made from the best available master, but without any work done to it at all. Likewise, the short subjects put on the disc as bonuses are of even worse quality. Given that both of those extra films are Oscar winners, and that The Picture of Dorian Gray scored an Academy Award for cinematography, don't they all deserve better?

Sound:
The original soundtrack is mixed in mono, and unlike the image quality, it sounds just fine. No hiss, decent tones, and a good balance of volume throughout.

Subtitles are in French, Spanish, and English Closed Captioning.

Extras:
The main extra here is a full-length commentary with writer Steve Haberman and actress Angela Lansbury, who played the songbird Sybil Vane in the film. The pair have a good back-and-forth about the movie, with Haberman filling out Lansbury's reminiscences about shooting the picture with further historical information.

I've always liked Warner Bros.' "Night at the Movies" conceit, where they add bonus shorts to their DVDs to replicate what audiences might have seen when they went to the theatre to see the main feature on the disc. It's getting to be a little predictable, however, though that may be more for the way the studio now treats it as compulsory rather than making it as special as when they originally started the program. Remember when there was a choice where you could play the two shorts before the film by selecting the "Night at the Movies" option rather than having to pick each element individually?

For this outing, Warners includes the live-action "Stairway to Light," a dramatization from the Passing Parade series detailing the reforms Dr. Phillipe Pinel brought to French mental health institutions in the 19th century, and the Tom and Jerry cartoon "Quiet Please!"

There is also a theatrical trailer from the original release of the film.

FINAL THOUGHTS:
Albert Lewin's 1945 adaptation of Oscar Wilde's The Picture of Dorian Gray was a seminal building block in my early education in cinema, and I was delighted to discover that the movie is even richer now that I am older and, if not wiser, at least a little smarter. Hurd Hatfield's chilly turn as the morally tortured libertine who escapes the effects of age and decay though the mystical properties of a portrait that shows the consequence of his lifestyle on his behalf is remarkable for its blank-faced nuance. Lewin creates a full world around Dorian, complete with opposing characters and material detail. Unfortunately, the DVD has had little work done to make sure that the film doesn't show the effects of age itself, and as a result, though I'd love to give this disc the top grade, it must only be Recommended. Such is the sinful greed of movie studios visited upon the movies they make! 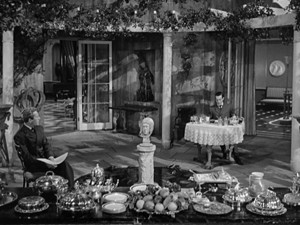 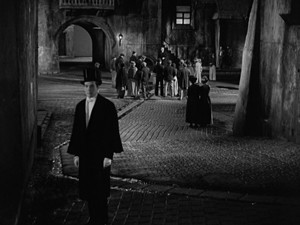