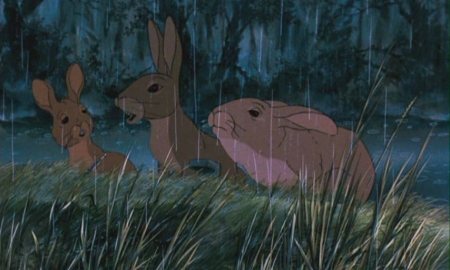 It's not every day that animated films---especially those featuring "furry woodland critters"---delve into extensive mythologies, introduce us to multi-layered characters and manage to insert genuine senses of danger into the story---but then again, Martin Rosen's Watership Down (1978) isn't your average animated film. Based on Richard Adams' book of the same name, this tale of rabbits and their struggle for survival has captivated fans of all ages during the past 29 years. Produced on a shoestring budget, Watership Down beat plenty of odds to become a true animated classic...so if this is your first introduction to Rosen's captivating film, you're in for a real treat.

New viewers will probably want a quick preview of the story, so here goes: Watership Down (both the film and the original book) is about a group of rabbits and their survival, but that's just the tip of the iceberg. Our story is prefaced by the mythology of this particular world---created by the sun god Lord Frith, as shown in the narrated introduction---in which the rabbits are strictly "the hunted", but are equipped with the necessary skills to evade their predators. A rabbit named Fiver, who's also something of a prophet, serves as the unofficial main character of the story; along with his older brother Hazel, he predicts the last days of their relatively peaceful stomping grounds. After something of a struggle with the rabbits' leader and their "military group", Fiver and a handful of friends manage to head for higher ground. From here on out, it's a tense struggle for shelter, safety and survival---but with predators at almost every turn, it soon becomes clear that most of these rabbits won't survive the journey.

Rendered in a detailed, illustrative style (after the much more stripped-down "mythology" introduction, of course), Watership Down's distinct visual approach is one of its greatest strengths. Foreground and background objects blend almost seamlessly in this colorful world, which features as many bold, frightening tones as it does pastel landscapes. The characters' naturalistic style would be something of a disadvantage in less-skilled hands; rabbits look fairly similar at first glance, but their visual differences are handled quite nicely. A strong cast of voice actors also helps us differentiate the critters, including John Hurt, Richard Briers, Denholm Elliott, Joss Ackland and Zero Mostel (in what would be his final film role), among many others. Offering further proof of the film's audio prowess, Watership Down is home to a strong score by Malcolm Williamson and also features the memorable song "Bright Eyes", written by Mike Batt. 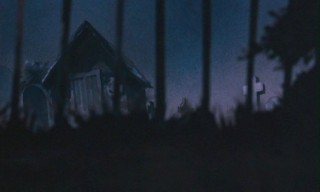 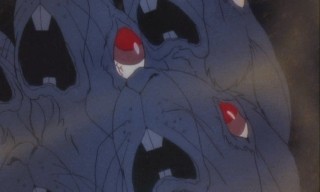 But more than anything else, it's the film's strong story that ultimately holds everything together. The relatively dark atmosphere of the book is kept generally intact---and unlike the later Watership Down animated series, an almost continuous sense of dread can be felt as danger draws near. Like nature documentaries seen on The Discovery Channel and elsewhere, violence is almost inevitable; here, the characters have names and personalities, so the loss of a character often feels more powerful. For obvious reasons, Watership Down is not a film to pop in as a virtual baby-sitter. This is a sophisticated film with a clear message, so those unsure of their child's ability to handle such delicate subject matter are encouraged to view it beforehand. Ultimately, though, Watership Down will provide a rewarding experience to those who can handle it: this is animation at a deeper level than what some may be used to, so those unfamiliar with it should expect a few surprises along the way. To make a long story short: this is a film to be shared and admired, as affecting now as it was almost 30 years ago.

First released on DVD by Warner Bros. in 2002, the original "snapper" edition of Watership Down has since gone out-of-print and remained tough to find at a reasonable price. Luckily, fans have this new Deluxe Edition to look forward to, which features a mildly improved technical presentation and a handful of new bonus features. It may not be the multi-disc Ultimate Edition some may have been hoping for, but those looking for a solid presentation of a classic film should enjoy every minute. Let's take a closer look, shall we?

Presented in a 1.85:1 aspect ratio and enhanced for widescreen displays, Watership Down looks quite good from start to finish. The minimal production budget (under $4M) doesn't pose as much a problem as some might think: the source material seems to have been kept in reasonably good condition, though there's no mistaking this with a squeaky-clean Disney DVD. A fine coat of grain is present during most of the film, image detail is a bit soft and some of the colors are just shy of vivid. Additionally, a mild amount of dirt and debris can be spotted along the way, though digital problems seem to be kept to a minimum. It's not a remarkable presentation, but this is certainly a step up from the previous out-of-print release (NOTE: Since I don't own the original DVD for direct comparison, this judgment is based on visual memory alone).

The Dolby Digital 2.0 Stereo mix isn't anything to write home about, though what we get is relatively pleasing overall. Dialogue is generally crisp and clear, while background noise and music cues rarely fight for attention. It's doubtful that a full-blown 5.1 mix would've done much for this production, so purists have one more reason to be happy. Optional English captions and French subtitles have been included during the main feature, but none of the bonus material. 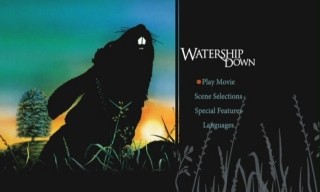 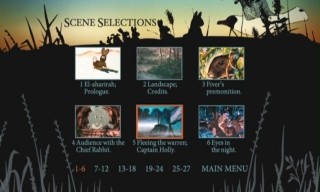 Seen above, the plain-wrap menu designs are basic and easy to navigate. The 92-minute main feature has been divided into a generous 27 chapters, while no obvious layer change was detected during playback. This one-disc release is housed in a standard black keepcase and includes no inserts of any kind.

Bonus Features
There's not much to pick and choose from on this Deluxe Edition, but what's included here fits the bill nicely. First up is Watership Down: A Conversation with the Filmmakers (17:11, below left), featuring a chat with director Martin Rosen and editor Terry Rawlings. Though lacking a bit aesthetically, this interesting session features plenty of terrific stories and even a handful of production photos. Rosen and Rawlings are humble and appreciative of their involvement in such a memorable production, while both are quick to credit Richard Adams' novel for laying so much of the groundwork (NOTE: A feature-length audio commentary with Rosen was included in at least one international release a few years back; it hasn't been included here, presumably due to rights issues).

Next up is "Defining a Style" (12:02, below right), a visually-themed segment featuring comments by animators Alan Simpson & Colin White, background artists Denis Ryan & Gary Sycamore and actor Joss Ackland (voice of Black Rabbit). Those with an interest in the film's striking visual approach should enjoy this session, which is also filled with plenty of production info and early sketches. Closing things out is a multi-angle Storyboard Comparison (4 segments, 14:06 total) depicting the opening sequence, "Nuthanger Farm", "Hazel is Injured" and "Efrafa Chase". All bonus features are presented in 1.33:1 and anamorphic widescreen formats, though no optional subtitles or Closed Captions are included. Warner Bros. continues to struggle in this department, despite their solid efforts in most other areas. 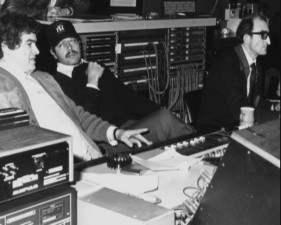 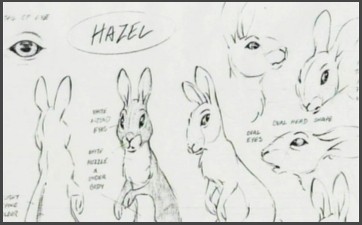 Though it's gradually slipped under the radar in today's Disney-dominated world of animation, Watership Down remains a compelling and mature film that continues to captivate fans of all ages. Featuring terrific artwork, strong music and a stellar lineup of voice actors (all of which completely defy the film's extremely modest budget), it's still the poignant story that propels everything forward. Warner Bros.' long-awaited Deluxe Edition marks a notable improvement over the out-of-print original release---and while the bonus features aren't quite as extensive as we'd like, these quality supplements are certainly worth watching. Those completely new to the film (and parents unsure if their children may be ready for it) are encouraged to rent this one first, but there's more than enough here to consider Watership Down a worthy addition to any respectable animation library. Firmly Recommended.