A disappointment, to be sure. Nickelodeon and Paramount have released SpongeBob SquarePants - WhoBob WhatPants?, a new collection of six SpongeBob SquarePants shorts, including a new title, What Ever Happened to SpongeBob? that premieres tonight on Nickelodeon. I'm a big fan of SpongeBob, but this latest collection of shorts...falls short, with the new headliner not nearly funny enough to head up its own disc. The remaining five shorts are from Season Five, and they're nothing too special, either. Bonuses are pretty paltry, also. 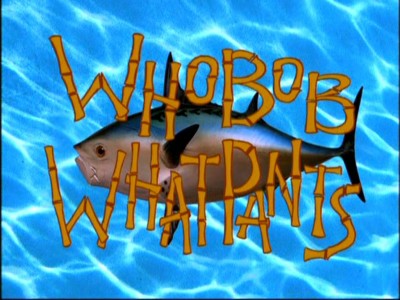 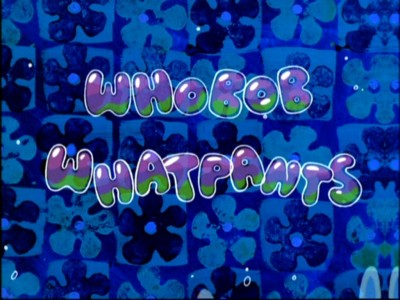 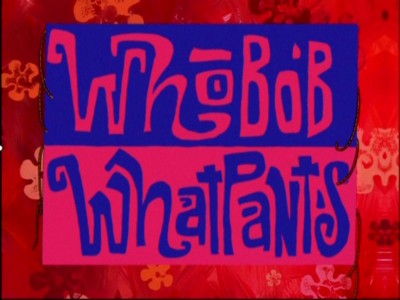 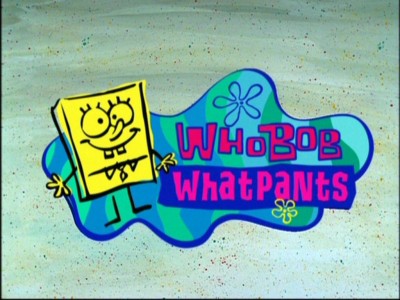 What Ever Happened to SpongeBob? starts off promisingly enough, with SpongeBob's signature sea chanty altered to "WhoBob WhatPants!" during the chorus answers (a change-up for that ubiquitous song that delighted my kids). However, after that nice little jolt, an aborted intro by Patchy the Pirate (the filmmakers only use a still of him, and animate it) seems to indicate trouble for What Ever Happened to SpongeBob?. I've always particularly enjoyed the live-action appearances of Patchy (played by SpongeBob's vocal talent, Tom Kenny). Not only are they usually as amusing as the SpongeBob specials that follow, they're parodistic reminders of those old local TV station cartoon hosts kids from my generation grew up on, giving SpongeBob SquarePants a further subtext of subversive nostalgia. It's too bad, then, that the filmmakers only give Patchy two seconds at the start of the film - and only in the form of a still photo, crudely animated.

After that disappointment, What Ever Happened to SpongeBob? fails to recover, delivering a thoroughly ordinary SpongeBob short that seems determined to ignore or squander its comedic potential. A brief synopsis follows (with MAJOR PLOT SPOILERS throughout the rest of the review, so you may want to skip down to the very bottom if you want to wait until tonight's airing of What Ever Happened to SpongeBob?). SpongeBob, awaking to another seemingly perfect, happy day, is crushed to discover that he can't do a single thing right, prompting all of his friends to label him, "Idiot boy." Devastated by their criticism, and sure that he's deserving of it, he decides to leave Bikini Bottom for good, and sets off for parts unknown. Unfortunately, he has an accident on the way (he falls off a sheer bottom shelf and conks his noggin), and through the timely suggestion of thieves who wanted to rob him of his clothes, the amnesiac SpongeBob believes his name is "CheeseHead BrownPants." Arriving in the mean, low-down town of New Kelp City (a play on New Jack City, perhaps?), SpongeBob may not remember who he is, but he knows he still likes to blow bubbles - a transgression that horrifies each citizen of New Kelp City he meets. Unaware of his deadly social faux pas, SpongeBob soon learns why he can't blow bubbles in New Kelp City: the "Bubble Poppin' Boys" gang say so, that's why. And when they catch SpongeBob, they plan on pulverizing him. But SpongeBob eludes his captors, and becomes the hero - and newly appointed mayor - of New Kelp City, an honor that makes the papers back in Bikini Bottom, and which alerts SpongeBob's friends, who have been worried about him, as to his whereabouts. 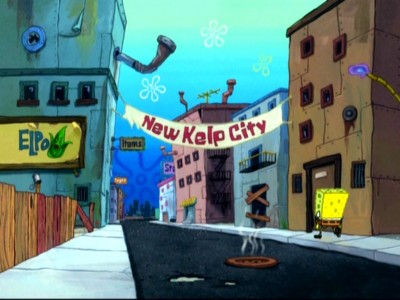 I'm not enough of a SpongeBob SquarePants expert to know if SpongeBob has ever had amnesia or not, but it would seem to be a goldmine of comic opportunities for the writers of the show. But in What Ever Happened to SpongeBob?, not much comes of the single most popular sitcom disease of all time. Couldn't the writers have come up with some funny adventures with the amnesiac SpongeBob that could have referenced his mythology, or perhaps recall and comment on some previous celebrated episodes? And what's the big deal about the "Bubble Poppin' Boys" gang? The shrinkwrap around SpongeBob SqaurePants - WhoBob WhatPants? included a sticker prominently heralding Ray Liotta's voice work in the show, but he probably only had a handful of lines in the whole show, with his character appearing for all of about two minutes. Literally, SpongeBob is confronted by the gang (with no background on the gang given to the audience), and he's immediately chased by them, before he quickly escapes. So much for the Liotta build-up. Why didn't the writers give us some background on the gang, or at least set up the short's central joke of the illegality of blowing bubbles in New Kelp City? We never find out why you can't blow bubbles there, and the relatively brief appearance of the gang doesn't provide much comedic tension for SpongeBob. The rest of the short putters along amiably enough, but I didn't count one big laugh-getter in the whole short. And that's unusual for a SpongeBob SquarePants short. Following the still-funny but lesser (in comparison to previous SpongeBob shorts) Pest of the West, What Ever Happened to SpongeBob? may, may indicate a general trend in "falling off" for the SpongeBob toons.

The remaining five SpongeBob SquarePants shorts come from Season Five: Goo Goo Gas, The Two Faces of Squidward, SpongeHenge, Banned in Bikini Bottom, and Stanley S. SquarePants. And for the most part, they're at least or more amusing than What Ever Happened to SpongeBob?. Bright, funny moments include the mother taking away her baby's formula to make a point, and the old geezer passing gas at The Krusty Krab in Goo Goo Gas (plus, everybody is pretty cute as babies); Squidward repeatedly getting smashed in the face with a door in The Two Faces of Squidward; SpongeBob's hermit coif in SpongeHenge, SpongeBob's trilling song-stylings in Banned in Bikini Bottom, and the series of disasters that Stanley initiates in Stanley S. SquarePants - all of which top anything in What Ever Happened to SpongeBob?. But since those shorts air all the time on TV, and this new toon What Ever Happened to SpongeBob? is so marginal, what, ultimately, is the point of the SpongeBob SquarePants - WhoBob WhatPants? disc? 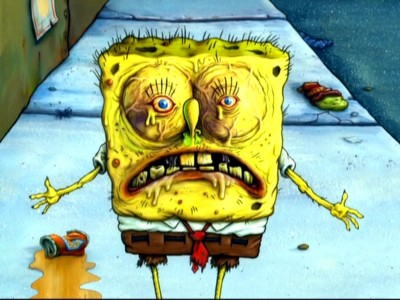 What Ever Happened to SpongeBob?
SpongeBob leaves Bikini Bottom, gets amnesia and finds himself Mayor of New Kelp City! When Sandy, Patrick, Mr. Krabs and Squidward finally find him, will SpongeBob return to his old life with these "strangers" or remain in the city where he's a hero?

Goo Goo Gas
In his latest attempt to steal the Krabby Patty secret formula, Plankton turns everyone inside the Krusty Krab into babies.

The Two Faces of Squidward
When Squidward breaks his face, his resulting look is so handsome he becomes all the rage in Bikini Bottom!

SpongeHenge
The strong winds whipping through SpongeBob's pores are creating beautiful music. Everyone knows music attracts jellyfish, and this time is no exception.

Banned in Bikini Bottom
The United Organization of Fish Against Things Fun and Delicious has banned Krabby Patties!

Stanley S. SquarePants
Cousin Stanley comes to live with SpongeBob and find his purpose in life. But it's tough to find when practically everything you touch goes up in smoke. Literally. 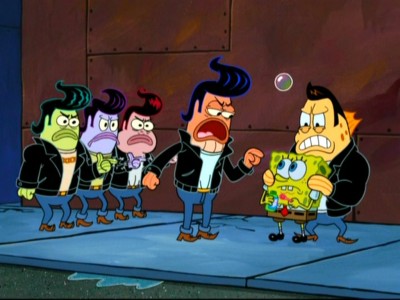 
The Video:
As usual with these SpongeBob SquarePants DVD, the full screen, 1.33:1 video transfer looks terrific, with incredibly bright colors and a super-sharp picture. There are no big compression issues to speak of (although interlacing is noticeable from time to time). Edge enhancement is acceptable.

The Extras:
There's the usual animatic that one finds on these SpongeBob SquarePants DVDs, this time for What Ever Happened to SpongeBob? (I've tried to show these to my kids, but they're frankly bored with them, saying they want to watch the "real" cartoon). Four 30-second shorts, all under the title, What if SpongeBob Was Gone, offer one or two cute moments, but all in all, these are pretty skimpy bonuses.