Warner Bros. // Unrated // October 21, 2008
List Price: $14.98 [Buy now and save at Amazon]
Review by Don Houston | posted October 29, 2008 | E-mail the Author
Background: Ben 10 is a show that plays on the Cartoon Network in the afternoon and I never saw an episode before catching the first season set. Essentially, there are alien races fighting one another for control of the galaxy. One of them created a device that straps itself to your wrist and proceeds to alter your personal DNA for a short period of time to transform you into a powerful alien lifeform; each of which has specific abilities and weaknesses. Ben is on summer vacation with his grandfather Max and Cousin Gwen when he's walking through the woods of a large forest. Unaware of the alien vessels in the area of space above his head, he sees a meteor in the night sky; a meteor that seems to have a mind of its own as it nearly kills him. Ben investigates the crash site and a device we later learn to be the Omnitrix attaches itself to his wrist but it won't come off. After fiddling with it, he gets it to light up with a weird green glow, and as he dials the device, different shapes appear on the screen. Ben hits the face of the device and then transforms into a fiery being capable of shooting fireballs from his hands (not the best idea in a forest by the way). The rampaging fire around his doesn't hurt him but it does get Max and Gwen rushing off towards him since that was the way he headed for his walk. Needless to say, they all figure a way to stop the fire with his two relatives only slightly startled at his newfound abilities. Thus began the adventures of Ben 10. 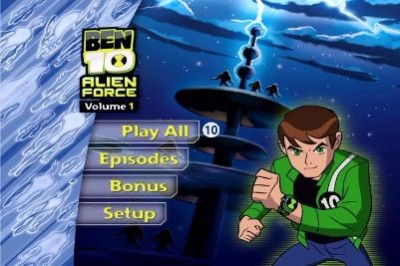 Initially, there were ten alien life forms that Ben could change into and Max saw fit to have him test his powers to learn more about them. His stint in the army is only part of his background, the viewer left to figure he was involved in something far greater with the government in his pre-retirement days. The aliens include, Heatblast (the first form mentioned above), Fourarms (a 12 foot tall wrestler shaped alien with four arms), XLRB (a short alien capable of running extremely fast), Stinkfly (a huge flying bug), Wildmutt (a beast in dog shape with enhanced senses), Diamondhead (another powerful type but made of a crystalline substance), Ripjaws (a shark like character), Ghostfreak (a being that can act like a ghost), Grey Matter (a tiny alien that is super smart), and Upgrade (a creature that can meld with any device and enhance its capabilities). During the series, it becomes evident that anything that effects Ben's physiology can affect the beings (when he gets a cold, they all seem to react differently) and hints that he will be able to become other creatures are dropped a few times as well. 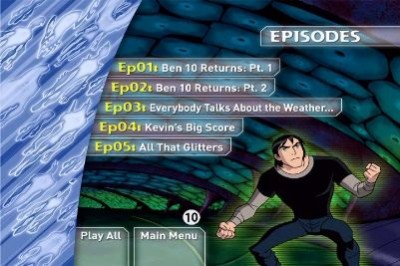 Now, having cool superpowers usually means there are bad guys that want to take them away from you for themselves, want to stop you from getting in their way, or simply want to do as they please. The moral lessons come in early and frequent that Ben has to do the "right thing" regardless of payment or hero worship; this is a kiddy show after all, and when he acts his age, things get screwed up (especially when he tries to use his powers to get a golden samurai card). Leading the pursuit to get the Omnitrix (to duplicate and arm his armies with) is Vilgax; a galactic warlord that is almost killed in the initial episode but manages to heal over the course of the season. He employs technology and mercenaries to hunt Ben down, often nearly reclaiming the device until the heroes save the day. Each episode where Vilgax doesn't have an active role in the story still manages to have another super villain or alien lifeform up to no good, often countering Ben's abilities by accident and then finding his perseverance to win the day. The trio drives around in Max's souped up camper, finding out by the end of the season that it can do a whole lot more (as well as Max being a whole lot more than meets the eye) than your off the showroom floor model. The show ran for four seasons and was kind of quirky fun as a guilty pleasure, the season sets giving some nice value for my entertainment value. In an effort to revamp the series, it was decided to age Ben five years to appeal to an older audience, showing the characters as older, hopefully wiser, and introduce a whole new dynamic in the form of Ben 10: Alien Force V1. 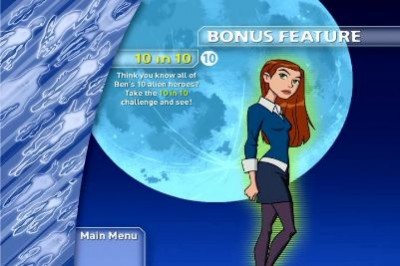 Series: Ben 10: Alien Force V1 revisits our hero Ben Tennyson five years into the future, following the events that brought the alien horde crashing into his hometown. The Omnimatrix has been removed from his wrist and all is peaceful in Ben's everyday life. He goes to high school and plays a mean game of soccer; that is until one day when he finds out Max is missing. Ben and Gwen reunite and after a brief alien incursion where the Omnimatrix is sought after by some mean critters. Ben decides that to find Max, he will need to become a hero once more, Gwen joining him and an alien plumber friend of Max's to solve a case of arms shipments to Earth. As the mystery unravels, it becomes clear that Max was working on something very big indeed, jeopardizing all life on Earth and possibly beyond. To Ben though, Max is the most important part of the equation, some initial difficulties leading him to discover a whole new palate of lifeforms on his watch, the old ones locked out. As he again starts up in the hero business, it becomes clear that he will need to enlist others to join his quest, leading to former enemy Kevin 11 (also depowered down but at least back on Earth) joining up for reasons of his own (not least of which is an affection for Gwen). 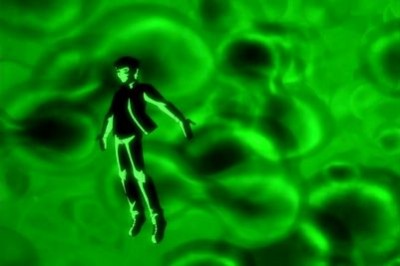 The trio gets into a lot of trouble along the way and decide that the best way to recruit help is to look for the children of other plumbers, the original group all retired as far as they know. This leads them across the countryside as they fight a variety of baddies with a difference this time in that the show has a single broader arc of episodes, not the same form of one shot with minimal connection as previous seasons of the original show. The new aliens are Humongousaur, Echo Echo, Swampfire, Big Chill, Brainstorm, Chromastone, Jetray, Spidermonkey, Goop, and Alien X (not all of which came out during the initial five episodes). Each of them has their own quirks and abilities, most of which are discovered on the job as Ben jumps into action. This is one of the ongoing weaknesses of the show too, Ben seems to know exactly what each will do in most cases, no dialogue supporting the reason why. There also seems to be a less restrictive time limit on the creatures appearances here, though it is unstated and still a factor, something a full season release might have helped with rather than the current distribution model of five episodes on the set. 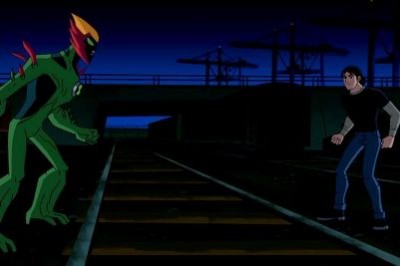 While I reserve final judgment of this newer version of the show until I've seen the whole season, it definitely had some potential and the low cost of the disc eased the pain for me more than a little bit, though I will still rant about the lack of a season set since that is the only decent manner to release such a show. I rated this one as Recommended as a result of the lack of extras and season versus the price and quality of the show though, fans might have mixed feelings about losing the original alien heroes for this new set (most of which did not impress me a whole lot). The series has more potential as a redo of the characters in some ways but I miss Max and have yet to find Ben a suitable replacement as leader so who knows where the show will lead me in the future. 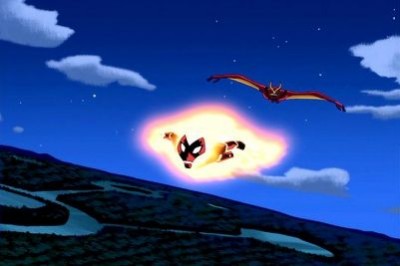 Picture: Ben 10: Alien Force V1 was presented in the original 1.33:1 ratio full frame color it was shot in for airing on the Cartoon Network in 2008 using the MPEG-2 codec of a standard definition release (and a 480i resolution). The five episodes looked clear and fairly crisp, with occasional compression artifacts or minor video noise, appearing to look superior to the random episodes I've watched in recent weeks. The animation style itself looked much like that from the Teen Titans, Kim Possible, and other shows out at this time so while it wasn't quite like anime from Japan, it was close enough that anime lovers should find it appealing too (except maybe the snobs). The disc never froze up or showed other problems for me, serving to provide a decent alternative to using my Comcast On-demand feature to watch less crisp looking versions of the episodes. I'm happy to say that the DVD looked markedly better than the cable version even if both looked pretty solid. 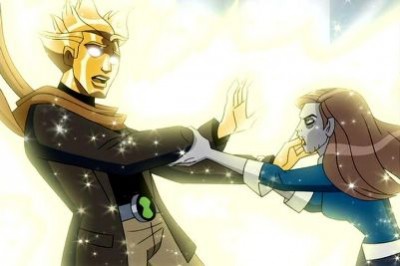 Sound: The audio was presented in 2.0 Dolby Digital with English as the only track losing the dubbed versions in Spanish and French for this series. There was a bit of separation on the tracks, especially during the fighting sequences, and the dynamic range was akin to most recent shows on the Cartoon Network; not great but reasonably modern compared to older, far crappier fare available. The voice acting was reasonably well done, not any quantum leap in quality but the creators using the opportunity to upgrade the cast and apply all they have learned to date. Yuri Lowenthal played Ben, Greg Cipes played Kevin, and Ashley Johnson played Gwen, each actor picking up assorted other minor characters too. The music seemed generic as could be but that's to be expected from such a show, even if the sound effects people did a fine job overall. There were also optional subtitles in English for the hard of hearing so they could enjoy the show.

Extras: The only extra was a test to see if you could identify all ten new aliens.

Final Thoughts: Ben 10: Alien Force V1 is a new version of the exploits of Ben 10 that a lot of people enjoyed for four seasons, updating some of the concepts and even Ben's transformation sequence so those of you that like change may appreciate it more than those that like the same old stuff. I found it appealing in a way, the future episodes were always my favorites, so I hope some of you give it a chance, either on the Cartoon Network or on disc form such as this set. In short, Ben 10: Alien Force V1 is decent entertainment fare for the younger audience to latch onto, maybe enough to bring the older audience on board for the newer adventures of Ben, Gwen, and Kevin as they scour the countryside for Max (and to stop the alien threat).