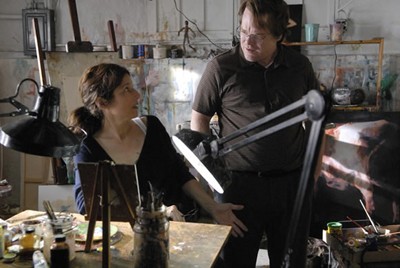 I find myself at a loss over whether to declare Synecdoche, New York difficult and tedious or hail it as a bold reduction of the human condition in a deconstructive narrative that pulls apart our notions of self-delusion and how the same are fueled by and in turn fuel popular entertainment and storytelling. I think Charlie Kaufman, in his directorial debut, makes a perfectly reasonable case for the latter, particularly in some final expository scenes where he breaks it all down for his audience. I have every confidence that he knew exactly what he was doing, I just don't know that acknowledging his command of the screen is akin to saying the result is actually good. And unless you find this very convoluted paragraph compelling, you haven't got a prayer.

Kaufman is perhaps our most accomplished chronicler of the weird and self-reflexive intersection of movie artistry and life expression. He has written some of my favorite films of the last ten years, including Being John Malkovich, Confessions of a Dangerous Mind, and Adaptation. For as challenging as those films were, he has gone above and beyond for his first solo effort. Synecdoche, New York is a philosophical epic, the portrait of one life furnished in emotional poverty. As with Kaufman's best material, how Synecdoche is told is inextricable from what it means, the way our imagination is useless without the internal translation and delivery system that allows our brains to communicate with our bodies.

The plot of Synecdoche, New York almost defies explanation. Philip Seymour Hoffman stars as Caden Cotard, a theatre director approaching middle age who is finding his body and his marriage are both failing. Unexplained maladies that announce themselves with pustules and oddly colored stool samples seem to be outward expressions of an interior malaise. He is married to Adele (Catherine Keener), a painter who creates portraits so small, they require magnifying glasses to see. As we will discover, Caden's point of view in terms of artistic expression couldn't be more opposite. He likes to go big, where the love of his life prefers to work small. Ironically, both approaches give the greatest importance to the most minute details--a rather large detail that they both fail to see as their most essential common ground.

It's actually the details that are getting away from Caden. Words are failing him. He constantly mishears what others are saying, and even written language turns into a garbled mess. Once Adele leaves for Berlin, taking their daughter Olive (played at different ages by Sadie Goldstein and Robin Weigert) with her, time also begins to unravel for Caden, and he seems to be traveling along a different timestream than everyone else. Minutes pass for him, while months and years pass for others. This is part of the aesthetic conceit of the film, which references Kafka's insular and surreal narrative style as an earlier indicator of where Kaufman is taking us. Synecdoche, New York operates according to a topsy-turvy dream logic, where out-of-place visual elements pass by unexplained and exterior existence is subject to subconscious influence. Caden's jumping across place and time is part of Kaufman's exercise here. The word "synecdoche" refers to a technique of showing a part as representative of the whole, and in terms of Caden's story, we are seeing snippets of his life that often appear disjointed but instead are all connected, moving us at a rapid pace through his biography, seeing how the chosen moments create the larger portrait of the man. Caden is a senior citizen by the time the movie is over, and frankly, I felt like I had aged quite a bit, too. 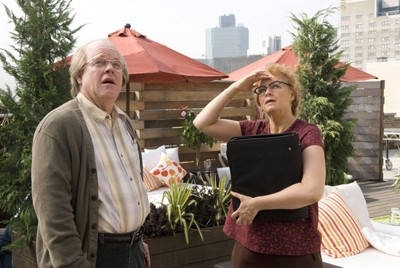 The first half of the picture has the most problems for me. It's fairly slow going and depressing. Kaufman appears to have read too much Philip Roth, and Caden manages to sleep with or have the opportunity to sleep with just about every lovely woman who crosses his path, including characters played by Samantha Morton, Emily Watson, Hope Davis, and Michelle Williams. We've seen this kind of artistic wish fulfillment before, where the creative schlump manages to be a Don Juan in spite of his clear lack of hygiene and social graces. It's hard not to assume Kaufman is indulging his own fetishes by his regular emphasis on his actresses' cleavage. Maybe the boobies are there to distract us from how unattractive a person Caden really is.

It's not until midway through that Synecdoche, New York becomes more intriguing. Caden gets a grant to produce an original play, and he creates a theatrical workshop to collaborate with his actors to divine truth through improvisation and create an approximation of life. This endeavor consumes him, growing ever bigger and encompassing every aspect of Caden's own existence. He recreates his city-- Schenectady, New York, a play on words as it and the title sound remarkably similar when said out loud ("synecdoche" is pronounced "si-nek-duh-kee," and there is also a brief discussion of other homonyms or mirrored words like "psychosis" (mental disorders) and "sycosis" (physical sores) in the movie)--and casts actors to play people from his real life, including himself. In that role is a man (Tom Noonan) whom we have seen in the background stalking Caden through most of the movie. This uninvited shadow's purpose is not really clarified. Why would this man be following Caden except in service to the needs of the script? It's one of many unexplained elements from the first half of the movie that create a disconnect between it and the latter half. So, too, does Caden's allegedly fatal diseases disappear without any further mention outside of the ever-present medication he downs by the handful.

That is unless we accept that maybe all of this is some kind of dying dream Caden is experiencing. His gargantuan play ends up becoming a portrait within a portrait, the kind of illusion created by facing two mirrors toward one another so that their reflections are multiplied and reduced to ever-smaller versions onward into infinity. It's the kind of thing we also expect from one of Kaufman's previous collaborators, Michel Gondry, who directed the writer's Eternal Sunshine of the Spotless Mind screenplay. In many of his music videos, Gondry has played with this idea of cinematic Russian dolls, lifting one lid to reveal a smaller doll underneath and so on. In the case of Synecdoche, Caden is so obsessed with his own past and its failures, he abandons all concept of a present life, and his recreations are counter-productive to other self-help measures he undertakes. He doesn't want help, he's too caught up in his own loneliness.

This self-replication production is fascinating to watch, but I can't escape feeling like it took too long to get there and lacked any great emotional or intellectual punch at the film's conclusion. It wouldn't be the first time Charlie Kaufman has been accused of being too clever for his own good, but it's also impossible to say whether any of his past directors like Gondry or Spike Jonze could have tempered the script's wild creativity with a measure of restraint. (There are quite a few other tangential ideas broached in Synecdoche, New York that I haven't even touched on here.) It's also quite possible that it's too much to take in at once, and like a David Lynch film, Synecdoche, New York requires more than one viewing to take it all in.

Unfortunately, that's not going to be a question I can answer anytime soon, because here the tedium wins out--there was enough of it to ward me off diving back into this cinematic bouillabaisse right away. I don't mind working for my art, but in this case, I fear Charlie Kaufman asks too much. If only there was a way to see a smaller version of the movie as a fuller representation of the whole. I suppose that could be the trailer. Wouldn't it be kind of fitting if I just watched that and let my memory fill in the rest?