Most who were alive at the time can remember precisely where they were when President John F. Kennedy was assassinated on November 22, 1963. My soon-to-be parents hadn't yet crossed paths at that point, so I have no recollections of the shocking news bulletin presented minutes after the event, the public outcry from the death of a beloved leader, the formation and actions of the Warren Commission---and most importantly, the not-so-silent public opinion that there was more to the story than what was originally told. Though a majority of Americans undoubtedly don't subscribe to the "magic bullet" theory, many have refused to believe that certain organizations inside (and outside) the government would participate in any kind of cover-up. Nevertheless, events like the assassination of Kennedy have contributed to a growing public distrust of the government---and though the truth about such events may never be fully known, certain theories have yet to be fully disproved.

For these reasons, Oliver Stone's controversial JFK (1991) has remained a provocative and polarizing film since its original release; in fact, several prominent journalists and public figures bemoaned the project before production began. Nevertheless, the dedication of the cast and crew ensured that such a strong statement would be unleashed upon the public---and much to the dismay of its detractors, JFK earned a great detail of critical and commercial support. It's been called "historically inaccurate", but Stone himself has described JFK as "a fictional response to the fictional Warren Commission report". Taken in those terms, JFK can be seen for what it truly is: a film painted with broad yet precise strokes, meant to provoke more than entertain---and above all else, it's meant to stir up public interest in this as-yet-unsolved case. The film's production even resulted in the release of previously-unseen documents from the investigation, with the remainder the files due for release in roughly two decades.

Though JFK's wave of popularity and influence can still be felt, those unfamiliar with the film are encouraged to approach it with an open mind. Our story revolves around real-life District Attorney Jim Garrison (portrayed by Kevin Costner), who suspects that there's more to the assassination of Kennedy than what the public has been told. Though a "lone gunman" (Lee Harvey Oswald, portrayed by Gary Oldman) remains the Warren Commission's sole culprit, Garrison eventually focuses his attention on businessman Clay Shaw (Tommy Lee Jones), private investigator David Ferrie (Joe Pesci) and others. An informant known as "X" (Donald Sutherland) spurs Garrison's imagination even further, hinting at cover-ups in higher government ranks. Though Garrison's obsession adds stress to his marriage and reputation, his personal conviction drives him further towards the goal: to learn the truth and let justice be served.

As the 45th anniversary of the assassination quickly approaches, casual fans of JFK will be happy to know that the film has held up well since its original release. The strong performances of this ensemble cast (which also includes Kevin Bacon, Sissy Spacek, Michael Rooker, John Candy, Jack Lemmon, Walter Matthau and many others) are easy highlights, while Stone's direction---and the strong editing, which garnered an Academy Award---ensures that this 206-minute film remains focused and organized. The precise cinematography by Robert Richardson (which also earned an Oscar) captures the hazy, sepia-tinged New Orleans atmosphere perfectly, though the color palette shifts frequently during different eras and locations. John Williams also contributes a stirring score, especially the film's percussion-driven title theme. The third act's climactic courtroom scene remains one of the best of its kind, representing a strong balance of intrigue and discovery; in fact, this practically remains the film's heart and soul, not to mention a particularly strong performance by Costner. All things considered, this director's cut of JFK (which adds roughly 17 minutes to the theatrical cut and remains the only version available on DVD) is a rich and satisfying experience, whether you subscribe to all of Stone's beliefs or not.

Originally released back in 2001 as a barebones "flipper" and two years later as a Two-Disc Special Edition, JFK has arrived again on DVD---this time, dubbed the "Ultimate Collector's Edition"---to coincide with the recent Blu-Ray release. Essentially, it's the same Special Edition housed in much more elaborate packaging, complete with several printed goodies and a newly-released Kennedy documentary tucked inside. In other words, it's aimed at completists and those who don't yet own JFK on DVD. Let's take a closer look, shall we?

NOTE: This package includes the 2003 Special Edition, so all technical specifications remain the same.

Presented in its original 2.35:1 aspect ratio and enhanced for 16x9 displays, JFK looks very good from start to finish. The film's frequent use of historical footage gives it a somewhat divided appearance, though this never proves to be distracting along the way. The color palette is bold and accurate, image detail is solid and black levels are typically consistent. Overall, fans certainly won't be disappointed with Warner's efforts here---but if you're looking for a visual upgrade, the Blu-Ray edition will undoubtedly be more satisfying.

Likewise, the Dolby Digital 5.1 Surround mix is generally pleasing overall. This dialogue-driven film rarely calls for much surround activity, though a few atmospheric effects and the film's score occasionally benefit from it. Dialogue and music rarely fight for attention, rounding out the audio presentation quite nicely. Optional English, Spanish, French and Portuguese subtitles are included during the main feature...but none of the extras on Discs 1 and 2. This isn't a surprise, given Warner's poor subtitle/caption track record. 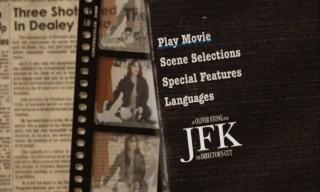 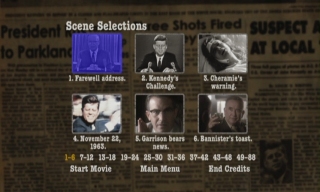 Seen above, the animated menu designs are basic and easy to navigate. The 206-minute main feature has been divided into a generous 88 chapters, while no obvious layer change was detected during playback. This three-disc collection is housed in a deluxe digipak case and comes with plenty of printed goodies and other inserts. These extras will be covered in detail below...but for a closer look at the overall package, click here. This Ultimate Collector's Edition is hardly a space-saver, though it still looks great on the shelf.

As mentioned earlier, this package contains the 2003 2-Disc Special Edition of JFK, so all the bonus material from that release is intact here. Disc 1 leads off with a feature-length Audio Commentary with director Oliver Stone, who provides a highly entertaining and informative track. It's obvious that JFK was an intensely personal project for the director, making his production stories and educated observations all the more affecting. Also here are text-based Cast & Crew Filmographies and a list of the film's Awards.

Disc 2 kicks off with the feature-length "Beyond JFK: The Question of Conspiracy" (89:57, below left). This insightful documentary focuses on opinions and facts surrounding the tragic event, not to mention the controversy heaped upon JFK's creation and release. Featured guests include key members of the cast and crew (Stone, Costner, Oldman and others), prominent journalists and former government agents, who take their turns supporting Stone's viewpoints and creative decisions---or opposing them, in certain cases. Next up is a collection of Deleted & Extended Scenes (roughly 14 clips, 54:43 total) with optional director's commentary; most aren't particularly noteworthy, though Stone's comments are certainly worthwhile from start to finish. Also returning are two Multimedia Essays, including "Meet Mr. X" (11:01) and "Assassination Update: New Documents" (29:40). As their titles imply, these featurettes focus on the real-life informant played by Donald Sutherland, as well as a more recent look at several unearthed files. Closing out Disc 2 is the film's excellent Theatrical Trailer (2:21), which advertises JFK as "the story that won't go away".

New to this release---but not technically a bonus feature, since this collection is advertised as a two-pack---is "The Kennedys: America's Emerald Kings" (134:57, below right), which is tucked away in its own keepcase...and available separately, if you're dreading a double-dip. This newly-produced documentary takes a detailed look at the Kennedy legacy from the late 19th century onward, beginning with the family's immigration from Ireland to Massachusetts. JFK gets the lion's share of the coverage (roughly an hour), though modest attention is also directed towards Robert, Ted and many of the Fitzgerald-Kennedy women, including Caroline, Eunice, Jackie and Jean. Interestingly enough, the assassinations of John and Robert are presented somewhat abstractly, which stands in contrast to the sensational nature of JFK itself. All things considered, this is a solid documentary that Kennedy fans will appreciate. 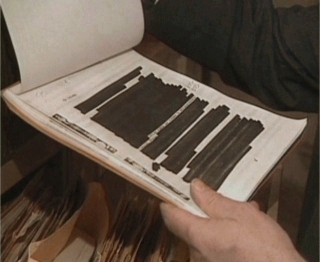 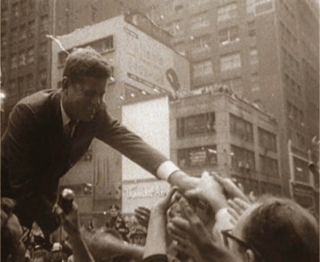 Several bonus printed materials deserve special mention, which are all tucked neatly inside this somewhat oversized package. A 44-page Hardcover Book (which most likely serves as the Blu-Ray's packaging) is filled with production photographs, essays and several key character write-ups, while a collection of Production Photos and Character Cards includes more detailed information on the real-life historical figures and the actors that played them. Also inside a mock "Presidential Folder" are a number of Speech & Letter Reproductions, including several notes written by Kennedy and his landmark 1961 inaugural address. Last but not least, a replica Kennedy Pin has been tucked inside the "America's Emerald Kings" keepcase; it's unknown whether the stand-alone release includes it.

All video-based bonus features are presented in a mixture of 1.33:1, non-enhanced and anamorphic widescreen formats. Most of the vintage material can't help but show its age (especially "America's Emerald Kings", which is comprised almost solely of historical photos and footage), though it's almost expected from such material and hardly distracting. Unfortunately, Closed Captions and subtitles are not offered during these extras---aside from the separate Kennedy documentary, of course.

There's no doubt that Oliver Stone's JFK is a polarizing experience---but approached with the correct mindset, first-time viewers will find a passionate film based on one of the 20th Century's greatest political tragedies. Stone's film has held up very well during the last 17 years, thanks to strong performances, terrific direction and a memorable score by John Williams. Warner Bros.' 2003 2-Disc Special Edition was a solid effort in its own right; so solid, in fact, that they've simply re-released it with a number of additional goodies. The printed bonus material and detailed packaging job are simply icing on the cake, but the inclusion of America's Emerald Kings makes this a solid collection for the asking price. Those who already own the Special Edition may want to simply pick of the Kennedy documentary on its own, while all other interested parties are encouraged to hunt this one down immediately. Highly Recommended.