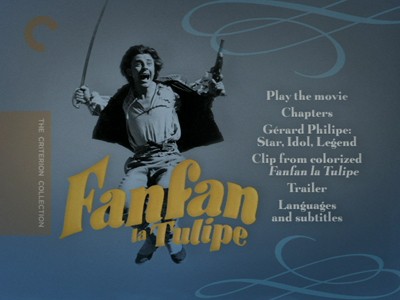 Fanfan la Tulipe is a ridiculously entertaining adventure film, nothing more, nothing less. The 1952 French swashbuckler is classic moviemaking at its most fun, a lightweight actioner with a wink in its eye and a sparkle in its smile.

Matinee idol Gerard Philipe is the title character, a rapscallion who joins the army of Louis XV (Marcel Herrand) in order to escape a shotgun wedding with a provincial lass. He signs up believing it will lead to his marrying the King's daughter, Henriette (Sylvie Pelayo), a false prophecy delivered by the daughter of the captain of the guard, a luscious lass who pretends to be a gypsy. This gal, Adeline (Gina Lollobrigida), has wooed many a man into believing many a lie all in the service of lining daddy's regiment. Of course, she has met her match in a rogue like Fanfan, and even after he is told she duped him, he continues to believe that a royal wedding is in his future.

As fate would have it, this far-fetched notion may not fetch as far as originally thought. On his way to basic training, the caravan of La Franchise (Nerio Bernardi), Adeline's pa, happens to be riding parallel with the carriage of Princess Henriette and the Marquise de Pompadour (Genevieve Page) when it is attacked by highwaymen. Though the other soldiers would rather hide and let the bandits pass, Fanfan rushes to the rescue, sword in hand. He successfully routes the attackers, and the Marquise presents him with a bejeweled tulip, hence his nickname. Having now glimpsed his romantic quarry, Fanfan will stop at nothing to scale the castle walls and glimpse her again, getting himself and his pals into trouble and inadvertently winning the affection of Adeline, who then manages to capture the hearts of Fanfan and King Louis alike. And why not? She's Gina Lollobrigida, for goodness sake, and while women as beautiful as her have started many a war, she may be the first to have ended one. In his fight for her hand, Fanfan manages to bring the Seven Years' War to a close. All in a days work!

If my writing skills are worth a damn and that description was fun for you to read, then you will certainly enjoy Fanfan la Tulipe. I enjoyed writing the above, and I definitely enjoyed watching the flick. Directed by Christian-Jaque, this comic action picture is about as unpretentious a pleasure as you are likely to find. It's not overly elaborate, nor does it intellectualize, but it's not stupid either. In fact, there are some quite clever touches, including a narrative voiceover that casts a wry eye backwards over history, and a reverse masking audio effect that renders the English soldiers' dialogue as incomprehensible to our ears as it would have been to their French enemies. It sounds like a one of the adults from the Peanuts animated cartoons wandered into a Twin Peaks dream sequence.

Gerard Philipe is an irresistible cinema star. He may not be as acrobatic as Douglas Fairbanks, but he's at least as much of a rake as Errol Flynn. His boyish good looks and optimistic charm makes him a joy to watch, and his continual and often unexplained outsmarting of his enemies is almost as funny as the many times he cockily blunders into his own defeat. Philipe has a natural agility that makes the swordplay appear easy. One can't help but root for him to get the girl and save the day. 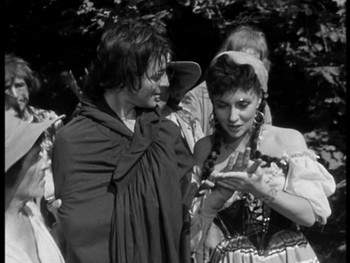 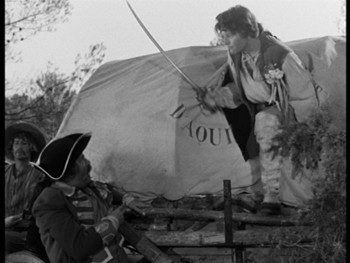 Video:
The Criterion edition of Fanfan la Tulipe sports a nearly flawless black-and-white fullscreen picture. I noticed a stray hair here and there, but I wouldn't even need all of the fingers on one hand to count them. The image values were strong, with sharp lines and good grays and blacks. I really see nothing at all to complain about here, it's a great restoration job. Superb.

Sound:
The original French soundtrack is given a solid mono mix that manages to keep the flare of the dialogue and the swell of the music without having either clash. There is no hiss or harsh tones, everything sounds right on. The optional English subtitles were easy to read and seemed to keep the buoyant, irreverent spirit of the dialogue. There is also an English dub of the film that might be good if you have younger viewers in the house. I listened to a little bit and it sounds fine, but unnecessary for older audience members.

A new documentary entitled "Gerard Philipe: Star, Idol, Legend" clocks in at just under half an hour and is a quick but informative biography of the actor. It is largely narrated with interviews with his daughter Anne-Marie Philipe and his biographer Gerard Bonal, but there are also vintage interviews with Gina Lollobrigida and director Christian-Jacque, as well as behind-the-scenes footage. The documentary covers his entire life, including his stage work and political activism, and it is generously illustrated with photos. 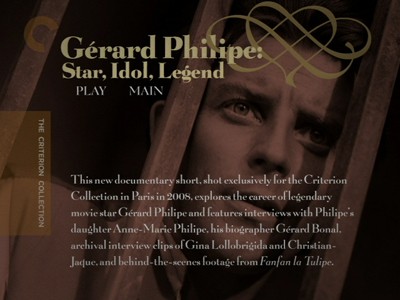 A short scene from the colorized version of the movie, featuring Fanfan rescuing the princess from the highway robbers, is included, though I can't fathom why. The colorization of black-and-white films has never worked, and this is no exception. It looks so oversaturated and garish, it's distracting.

Finally, the disc has the original theatrical trailer.

FINAL THOUGHTS:
Fanfan la Tulipe - Criterion Collection is a pleasure from start to finish. This 1952 French action film is old-school entertainment at its finest. Starring Gerard Philipe as the rapacious swordsman and the gorgeous Gina Lollobrigida as the girl who both drives him crazy and confounds his heart, the movie is brimming with both physical and verbal swordplay. Criterion has brought the movie to DVD with a beautiful black-and-white transfer, and it is Highly Recommended. 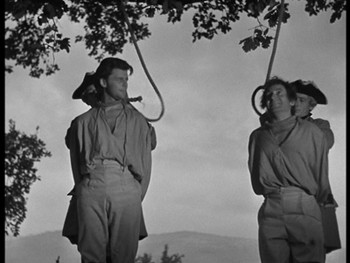 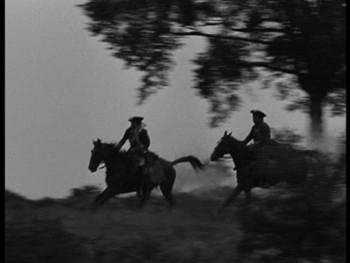