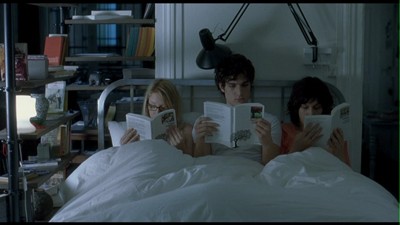 I know that critics quite often resort to saying, "You won't see anything else quite like Movie X," and most of the time it's barely even true, but trust me, I think Christophe Honoré's Love Songs (Les Chansons D'Amour) has a pretty good shot of being the only musical about a ménage-a-trois you're going to find on the new release rack wherever it is you go to pick up your DVDs. I've sat here for the last ten minutes writing multiple introductions, stuff like "Oh, those whacky French!" and "Alert Fox News!" and none of them really captured how perplexed I truly am.

Because for me to call this a threesome musical is to play along with the game and withhold key information that has been carefully left out of the marketing info so that Honoré can pull a rope-a-dope on you with a first act shocker that topples the happy, romantic image they've concocted to make audiences think this is a breezy musical comedy. It's a musical all right, but there's not much I'd call romantic and I can't recall a single laugh. The back cover text calls Love Songs "exuberant and tender," and okay, maybe I'll give them that, but only just.

Let me see if I can tackle the set-up here. Julie (Ludivine Sagnier) and Ismaël (Louis Garrel) are lovers, but there is tension in their relationship. Some of that comes from a love gone stale--Julie longs for more romance, the always joking Ismaël maybe takes her for granted--but there is an added X-factor in their life together that has engendered additional weirdness. Alice (Clotilde Hesme) works with Ismaël at a newspaper of some kind, and she's also Julie's lover, sharing a bed with both her and Ismaël but her body with only one of them. Or maybe not. It's actually hard to figure out whether something is going on with Alice and Ismaël. Julie seems to think he is sleeping with someone, so if not Alice, then who? Julie is jealous of the attention he gives Alice, Alice is jealous of the attention they give each other, and Ismaël just wants a piece of whatever action he can get. We don't really see any sex, merely hints of it, a few kisses and some under-the-covers fumbling, so perhaps Honoré is intentionally trying to confuse us.

Or perhaps it's indicative of a muddled psychology that runs through the entire picture. Something happens that tears this love triangle apart, and the rest of the film is spent with the remaining characters wandering around trying to figure out how to keep from being so sad about it. Julie's family--a mother, father, two sisters, and a dog--insert themselves in everything whether they are welcome or not. Alice takes a new lover (Yannick Renier), whose little brother (Grégoire Leprince-Ringuet) takes a liking to Ismaël. Ismaël sleeps with the little brother, but he also sleeps with a cute lady bartender (Annabelle Hettmann) and makes puppets so he can talk in obnoxious voices.

Oh, yeah, and he sings. They all sing. And rather badly, at that. Love Songs is probably 2/3 singing, with songs by Alex Beaupain. The musical style borrows some from '60s French pop, but the tunes are all underwritten and sound more like demos than finished products. The melodies are fairly flat, placing a greater importance on the words, almost like singing dialogue a la The Umbrellas of Cherbourg, which is also likely the inspiration for the unvarnished vocal delivery. But whereas the Jacques Demy film was a charming, otherworldly concoction where the songs let us into the inner world of the characters by erasing any separation between inner and outer, the musical numbers in Love Songs only serve to distance us more. Actually, they do worse than that. They act as an excuse for Christophe Honoré not to expend any further effort. He doesn't have to delve into the characters deeper and sort everything out, he's going to dazzle us with this gimmick.

Well, I, for one, was left undazzled. At one point, Julie's oldest sister (Chiara Mastroianni) says she is not judging anyone, she is merely trying to figure out what is going on. I'm not as even-handed as her, I'm doing both, and given the fact that I can't figure out what this is all intended to say, I choose to judge it harshly. In the credit-where-it's-due department, the actresses in the film--particularly Sagnier, Mastroianni, and Hesme--all give it their best, and even if their characters are disconnected from a meaningful narrative, they all appear to find some meaning in their personal experience. I suppose that Louis Garrel is good, as well, though it's hard to tell what is genuinely intended to be Ismaël's mugging and preening and what is the actor mugging and preening for the sake of it.

Which is the conundrum of Love Songs in a nutshell: how much of it is genuine expression, and how much of it is lazy, attention-grabbing showing off? I gave up trying to make sense of it midway through the second act, and were I not compelled by my duty to see it through, I'd have probably switched it off altogether. Once again, I take the bullet so you don't have to. 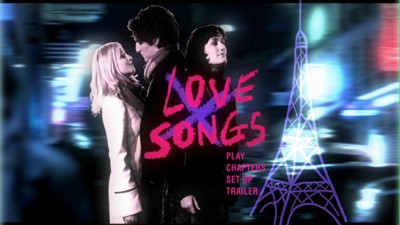 Video:
The widescreen transfer on Love Songs is fairly average. The colors were decent and the blacks were fairly solid. I noticed some fuzzy outlines here and there, but nothing too dramatic. Overall, the quality is decent.

Sound:
In terms of the soundtrack, IFC have done right by Love Songs, with a warm 5.1 Dolby mix of the original French dialogue, as well as a solid 2.0 mix. There was a nice clarity to the music and the audio maintained volume without growing distorted. The optional English subtitles were also well written and kept a good pace with the songs without being too fast for me to keep up.

Extras:
While I might have actually found some interest in a commentary featuring Christophe Honoré laying his process bare for us, I am actually thankful that the DVD of Love Songs is mercifully bereft of supplemental features beyond the cursory theatrical trailer.

FINAL THOUGHTS:
Skip It. Too much gimmick, not enough actual writing. Love Songs fancies itself a 21st-century musical that dares to go into taboo territory, but it's really just a tacky mess lacking in style or even a clear goal. Beginning as a three-way affair between a trio of young French lovers, it quickly takes a left turn into bizarre, sentimental territory and then continues making left turns until the viewer has all but forgotten where it all began. The songs aren't memorable, nor is the story, and though the actresses in the movie try to dredge something real out of their roles, the male lead, Louis Garrel, skates by on narcissism. Just in case you missed it at the start of this paragraph, I'll say it again, Skip It! 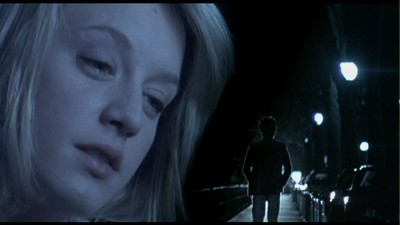