Fox // Unrated // November 11, 2008
List Price: $89.98 [Buy now and save at Amazon]
Review by Stuart Galbraith IV | posted November 28, 2008 | E-mail the Author
A pal of mine is part of that small but fiercely loyal contingent of Firefly fans. Last year at Christmastime he gave me an HD DVD of Serenity, a 2005 film I barely had heard of based on the short-lived TV series (less than half the 2002-03 season) - a series I knew even less about. The disc sat on The Pile of Stuff to Watch all year long, partly because I was hoping the series itself would get released to Blu-ray and I could look at everything in the order intended.

I'm glad I waited. Firefly: The Complete Series, as it turns out, is unusually good science fiction, though the science fictiony aspects are the least emphasized. Obviously but effectively it draws more on classic Western film iconography, a perilous genre-fusing attempted infrequently, fairly well in Moon Zero Two (1969) - also about an embittered space salvager - and embarrassingly so in Outland (1983), to cite two examples.

The show was on Fox for exactly three months, 11 episodes from September-December 2002. Three additional episodes were produced but gathered dust until they were finally dumped onto the airwaves the following summer. (The Blu-ray packaging inaccurately describes these three as "never-before-aired." Not so.) 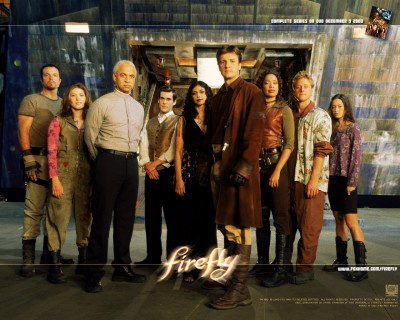 The series is set far into the future, in the year 2517, when mankind is ruled by the fascist-like Alliance, though the outer colonies, like the Old West of the 19th century, are more self-governed when not outright lawless. Treading a fine line between legal and illegal trade, the crew of the "firefly" class spaceship Serenity, like the Millennium Falcon in the Star Wars films, transports passengers on the run from the Alliance and smuggles stolen goods.

Her captain is Mal Reynolds (Nathan Fillion), who with second-in-command Zoe (Gina Torres) fought the Alliance as a "browncoat," in a costly war six years before. (The series opens with the Battle of Serenity Valley, from whence the ship gets her name, a sequence that stylistically resembles Starship Troopers.) True to his name, Mal is a malcontent, openly bitter though reticent in most other respects. Zoe is an ass-kickin' career soldier, as is Jayne Cobb (Adam Baldwin), Serenity's muscle, a bellyacher who always seems poised to sell out his crewmates to save his own skin or if there was money in it for him. Or maybe he's just messin' around.

Also on board is "Wash" (Alan Tudyk), Zoe's husband, contrastingly so, the ship's pilot and whose personality is much more relaxed and "civilian" than his wife's. Kaylee (Jewel Staite), who looks like a wide-eyed freshman at Stanford, is the ship's crackerjack engineer.

The pilot movie introduces Serenity's passengers, all of whom are series regulars: Inara Serra (Morena Baccarin), is an exotically beautiful, highly-prized "companion" - or in the classical Western sense the hooker with the heart of gold, the Claire Trevor part. Dr. Simon Tam (Sean Maher) is another passenger, a fugitive for having rescued his child prodigy sister, River (Summer Glau) from Alliance-sponsored scientific experiments to probe her genius (and vaguely extra-sensory powers). Finally, Derrial Book (Ron Glass, yes he of Barney Miller fame) is a shepherd (i.e., priest) with a mysterious past. The performances are good across the board.

The Western influences are everywhere (including its twangy theme song), though stylistically it doesn't much resemble movie Westerns of any era. The outer colonies, terra-formed and populated with earthly goods, have saloons, shinkansen-like bullet trains that nevertheless resemble 19th century ones, and posse-like gangs ride around on horseback. Inara functions a lot like Miss Kitty on Gunsmoke, softening Fillion's character and bringing a general humanity (and sex appeal) to the coldness of space. And so on. Cobb is like a Warren Oates character in a Peckinpah film. (Baldwin echoes this exactly in the making-of featurette.)

The key to shows like this is its characters and the way they interrelate. Though arguably overly-calculated in this regard, Firely's characters are immediately interesting and their personal stories and struggles involving. They move in unsurprising directions at first, though as the series develops they begin to grow and change in unexpected ways. Considering that even great shows usually struggle over the course of their first seasons to get all the bugs out of their various characters, creator Joss Whedon (Toy Story, Buffy the Vampire Slayer) stays way "ahead of schedule" and it's easy to imagine how much more could have been mined from these characters had the show lasted longer.

The look of the show is hit-and-miss, but inventive. There's an attempt to make Mandarin part of the everyday language, built on speculation that American and Chinese influences would dominate the next several centuries; characters' dialogues are peppered with Chinese phrases. The incorporation of Western props is colorful but at times illogical. Everyone carries pistols and sawed-off shotguns, but would you really want to be firing such things off inside a ship navigating deep space? There's an attempt, mostly successful, to create a lived-in future where people worry about making a living and work together like people work together in offices and factories today.

Conversely, the special effects are truly innovative, perhaps the most innovative since the advent of CGI. Created by ZŌIC Studios, their design eschew the Dolby Stereo roars of speeding ships and masterly mise-en-scene established by ILM in favor of a soundless space, "hand-held" camerawork, wrack-focus and zoom shots. The same visual style would be carried-over almost to the letter for Battlestar Galactica.

If you've never seen Firefly and made it this far into the review you're likely asking yourself, If the show was so good why was it cancelled? The franker-than-usual behind-the-scenes featurettes suggest the Fox Network, initially enthusiastic, failed to get behind the show, second-guessing its creators and insisting upon more up-front action, humor, and an immediately defined environment and characters. Though Whedon and his team resisted, Fox made the stupid decision to air the action-oriented (and more conventional) "The Train Job" first, ahead of the more leisurely-paced but vitally character-establishing pilot episode. (Incredibly, Fox ran the pilot last among the original 11 shows.) This all but doomed the show out of the gate. Clearly, Firefly was the kind of series that required special nurturing to sell it to viewers; it didn't have a chance under these circumstances.

Firefly's fourteen episodes are presented over three single-sided 50GB dual-layered discs region-coded both "A" and "B," all in an impressively compact case. Typical of Fox, the discs take a long time to load on older (but hardly old) players to accommodate all the Java-enhanced menus, which frankly aren't all that more sophisticated compared to standard DVD ones.

Whedon reportedly battled Fox over the show's aspect ratio. It's presented here in full 1.78:1 widescreen in 1080p. All the live action footage was shot in 35mm and looks quite nice; there's a lot of detail to take in terms of the subtle performances and the set designs especially. Some have complained that the CGI effects, created in standard-definition format, look blurry and unimpressive in high-def but to a point I disagree. Certainly ZŌIC Studios' CGI work looks better on, for example, the HD DVD of Battlestar Galactica (on which, ironically, many reviews complained that while the effects looked great the first unit footage looked inferior; I disagree about that, too). Though a bit soft, the artistry of the effects still shine through, and it integrates better than I would have expected it to; after all, it's still standard-def effects maximized in a high-def presentation.

Audio is state-of-the-art DTS HD 5.1 Master Audio, with alternate tracks in 5.1 DTS German, and Dolby Surround French and Spanish (with optional English, Spanish and, of all things, Dutch subtitles. The mix is up to contemporary television standards, boosted somewhat for Blu-ray presentation. The disc is also closed-captioned.

Most of the supplements are carryovers from the standard DVD release in December 2003: Seven audio commentaries with various combinations of cast members, writers, directors, and producers; How It Was: The Making of Firefly, a frank and informative 30-minute featurette; four short behind-the-scenes featurettes (including an audition video and set tour); 10 minutes worth of deleted scenes, and a brief gag reel.

New for this release is one additional audio commentary, for "Our Mrs. Reynolds," and a half-hour Firefly Reunion both featuring Whedon, Fillion, Glass, and Tudyk. The reunion video is in 1.78:1 high-def; everything else is standard-def full-frame.

This is a fine if pricey series (the standard DVD currently is $19.99 on Amazon), almost unique in sci-fi television, with an almost instantly likeable cast of characters and an appealingly offbeat sensibility. If you're a fan of the re-imagined Doctor Who and/or Battlestar Galactica, by all means give Firefly a spin - chances are you'll find yourself hooked. Highly Recommended.