The similarities between film and painting are profound. In each, two-dimensional space is used as a canvas, and the illusion of depth is created with light and shadow. This comparison is explored in the 2007 IFC film Anamorph from first-time director HS Miller. It functions as a cop movie and a mystery, and its quality and unique subject matter set it apart as somewhat of a hidden gem. It has received a good treatment on its DVD release.

Willem Dafoe plays NYPD Detective Stan Aubray, a single man who spends most of his time alone when he isn't teaching courses at the academy, which he would rather do than work on cases. Aubray is haunted by a case he helped solve five years ago in which a killer nicknamed Uncle Eddie killed people and arranged their bodies as works of art. Aubray blames himself for one of the victims, a prostitute named Crystal (Samantha MacIvor), whom he failed to warn not to work a certain section of town on the night she died. Now, Aubray is forced back into the world of elaborate murders when an apparent copycat starts mutilating New Yorkers. New Detective Carl Uffner (Scott Speedman) is in charge of the new case, and he doesn't completely believe Aubray or the official version of how Aubray and three other cops shot and killed Uncle Eddie five years ago. Soon, Aubray is drawn into the mystery in a very personal way, as the messages left at the murder scenes are directed towards him. The question arises, "Was that really Uncle Eddie we killed years ago?"

To an extent, Anamorph is a character study of Aubray. We learn that he is lonely. He doesn't keep a very comfortable apartment, but he does obsess over a few pieces of furniture in it. This is because he is somewhat obsessive compulsive, and he is consumed with the tactile qualities of things. He doesn't particularly like himself or trust himself to get close to anyone, including Sandy, another hooker whom he cares for and who was Crystal's best friend. He is an alcoholic. His character drives the whole movie, as he dominates the screen time, and we find that the very reason for the plot is that the killer is obsessed with Aubray. 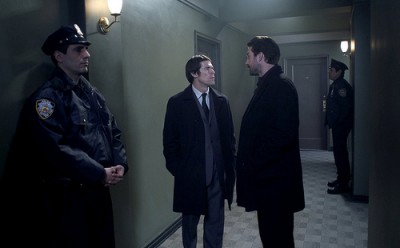 The production design of the film is remarkable; a lot of effort was put into the art contained within the film, especially the crime scenes. The setups are even more elaborate than they seemed to be with the original Uncle Eddie killings, and it's almost believable that these setups could work in real life. I won't spoil too many of the artistic deaths, but here's an example of one: a single body is chopped up into many pieces. Some of these are then spliced together, and all of the pieces are then hung separately within a room. They are hung by strings, out in the middle of the room, over a space perhaps five feet square. The result of their arrangement is that, when viewed from just the right angle, they form the shape of an elaborate and hideous bird, like a vulture from hell. Again, I don't really think this was completely believable, but it was stunning nonetheless.

Dafoe (Spiderman) is his usual gaunt, unhealthy-looking self as Aubray, and that really works for his part in this film. I have no complaints about his performance. Speedman (Underworld) sports a beard and looks eerily like Screech from "Saved by the Bell." This guy will probably explode soon as an actor.

Anamorphosis is a Renaissance painting technique that uses the principles of forced perspective to construct an alternate image within the frontal composition. In other words, if you view a painting from another angle, like from 10 degrees instead of 90, you see another image that you didn't know was there. This is the theme of Anamorph, as well as the essence of postmodern thought: everything is subjective; what you see depends on where you're standing. And so, as the killer hides clues and intent in his works of art using anamorphosis, the heroes must learn that lesson in order to solve the crime and prevent him from murdering again.

I was intrigued by this idea, so I watched Anamorph while standing on my head, but it was the same movie.

So, how does this film stand up to that older, more venerable art form to which it draws so much attention and inevitably compares itself? Quite well. The shots are skillfully composed and lit by cinematographer Fred Murphy. Many of the compositions self-consciously draw attention to themselves with frontal views of architecture and such, and they are all high quality. However, don't expect a bright, vibrant presentation; the mood of the film is embodied in the drab colors of New York.

You'll have to form your own opinions about the end of this movie; I felt that it ran out of steam and wasn't able to make a satisfactory conclusion. It seemed to be suggesting that the power of art is able to affect reality. The last shot of the film is an effect shot that distracts from the movie, and I was upset that we learned absolutely nothing about the killer.

Keep in mind that the violence in Anamorph is very graphic.


Anamorph is presented in its original theatrical aspect ratio of 2.35:1, and the picture is very attractive, especially on a widescreen TV. It is anamorphically enhanced, and I watched it upconverted to 720p; I suggest you do the same. The image from 35mm is very sharp, and it held up well even with all of the drab lighting conditions in the film. I saw very little in the way of artifacts, even though the type of scene that usually gives my TV a hard time (low lighting and mist) was prevalent in Anamorph. While the colors are rich, they aren't allowed to show much because of said production design, but when a vibrant red or purple does show up on screen, it's all the more beautiful. This is about as good as DVD can do with a picture.


The only audio track on this DVD was in English 5.1-surround. That's excusable because it sounds so darn good. The soundtrack is put to extremely good use, with a lot of bass in the slow, ponderous songs rattling your speakers to reflect the emotional intensity of Aubray. The surround programming is great; nice little touches are sprinkled throughout to immerse the viewer in the world, like approaching footsteps or a closing door in the back speakers as someone moves offscreen. The sound design on Anamorph is top rate. But a movie like this can always benefit from a commentary track, which this doesn't have.

The DVD also contains subtitles in English and Spanish.

The other extra is a featurette called "The Making of Anamorph." This was made for TV, for IFC, and it's one of their standard making-of docs. It isn't all that great, and you won't find out anything profound about the film by watching it. It is six minutes long and presented in 16x9, but, annoyingly, not enhanced for widescreen TV's, so you have to zoom in to get it to fill one.

Anamorph isn't very long, ending abruptly at about 99 minutes. While you need to watch this film more than once to understand everything the filmmakers are showing you, the lack of special features cuts down on the replay value of this DVD. Those of you who are art fans will definitely want to check this out, as will those of you who love crime dramas. But its incoherent ending may turn some of you off, even though, if you're a film fan, you'll be able to appreciate what Anamorph does right. I'm going to go with a "Recommended."