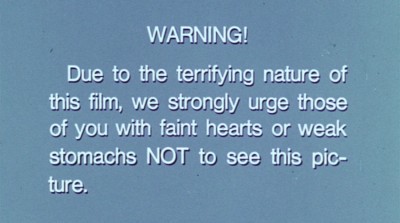 You don't have to be a fan of the exploitation film genre to appreciate the anthologies of vintage trailers released on DVD by Synapse Films. Entitled 42nd Street Forever, Volume 4: Cooled by Refrigeration, this latest release packs in more than two hours of trailers from the 1970s and '80s originally created to entice audiences of young adults into returning to the theater with promises of outrageous comedy, lurid violence, nudity, extreme action and special effects, and spine-tingling chills.

Packed with nearly every special effect in the film and exposing nearly every plot twist, these trailers were super-concentrated films in their own rights often far better than the feature films they were intended to promote. Free of the eighty minutes of bad expository, lame jokes, and boring buildup found in the feature film, the trailers were pure excitement. No matter how small the budget, hackneyed the script, and mangled by ham-handed acting the feature film was, a halfway competent editor could make the trailer seem like cinematic gold.

Though many of these films will be familiar to genre fans, I've never seen any of them. I was too young to see them when they came out in the 70s and 80s. And, I honestly have little desire to see any of them now. Yet, the trailers were thoroughly enjoyable in their own right, and they're something that will likely hold up to repeated viewings.

The trailers included in 42nd Street Forever, Volume 4 are as follows:


Presentation
42nd Street Forever, Volume 4 comes on a single dual-layered DVD-9. The trailers may be played sequentially or accessed individually.

Video:
Although mastered for DVD in anamorphic widescreen (1.78:1), many of the trailers have significant print damage. Nevertheless, the damage rarely distracts markedly from the overall presentation and often adds to the unearthed treasure vibe of the collection.

Audio:
The mono audio suffers slightly from damage to the film elements but mostly sounds acceptable. Audio levels are consistent between the feature trailers, but not between the main feature and the TV spots.

Extras:
Although the extras also include a handful of vintage TV spots, the real bonus feature of note is a feature-length audio commentary with Fangoria managing editor Michael Gingold, film historian Chris Poggiali, and AVManiacs editor Edwin Samuelson. These guys are real genre aficionados who seem to have something noteworthy to share about every flick.

Final Thoughts:
The latest collection of exploitation film trailers from Synapse Films entitled 42nd Street Forever, Volume 4: Cooled by Refrigeration is a treasure trove of the lurid, risqué, violent, pandering, and absurd. Packing in more than 44 theatrical trailers along with a handful of teasers and TV promos along with a first-rate optional audio commentary, 42nd Street Forever: Cooled by Refrigeration is highly recommended for exploitation genre film fans.