Hawaiian based producers JN Productions and Generation Kikaida have released their third tokusatsu (special effects) Japanese TV series: Inazuman, much to the joy of nerdy fan-boys like myself.  Their previous series, Kikaida, Kikaida 01, and Kamen Rider V3, were all excellent and so the bar was pretty high for this series too.  Happily this series is great too.  At times it's silly and goofy and other times overly serious, Inazuman is a whole lot of fun and one of the more enjoyable henshin shows that I've seen. 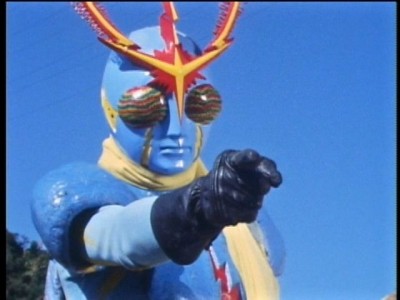 As Watari Goro and his friend Marume Gosaku are walking home from college classes one evening, they discover two children being attacked by evil mutants.  Fighting the creatures off, Watari discovers that the kids are part of the Youth League and their adversaries were Fantom Army foot soldiers from the Neo-human Empire.

The Neo-humans, led by Emperor Bamba, know that the Earth's resources are limited and that in a few years famine will strike and there will not be enough food for everyone.  Their plan is to wipe out humanity so that Neo-humans will be able to have all of the resources during the hard times to come. 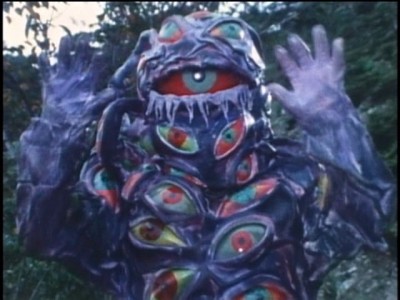 The Youth League, a group of kids with secret bases throughout Japan, is fighting the Neo-humans with limited success.  When their leader, Capt. Sarra (who pretty much disappears after the first episode,) tests Watari however he discovers that Goro is a very powerful mutant.  Putting him into one of their advanced machines, the Youth League activates Watari's abilities.  He's then able to shout "Summon Massive Power" and turn into Sanagiman!  Not only that, but when "Sanagiman matures, his belt reaches maximum and he becomes Inazuman!"  Capt. Sarra also gives him a special car, Raijingo.  This colorful vehicle can not only speed along the roads, but it can fly and has air-to-air missiles that it launches from its 'mouth.'

With his new powers, which include the ability to teleport, turn his scarf into a giant chain, and the "Supreme Lightning Strike that finishes off his opponents, Inazuman battles Emperor Bamba, the head of the Neo-humans, and his hoard of monsters including Sand Bambara, Hundred-Eye Bambara, Mold Bambara, and others. 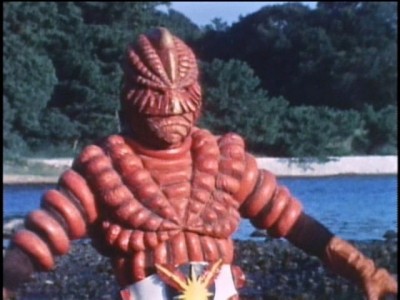 I had never seen the show before this set arrived, but I had high hopes.  Inazuman was created by Shotaro Ishinomori the mind behind such influential henshin shows as Kamen Rider, Kikaider, and Secret Task Force Goranger.  Not only that, but the lead was filled by none other than Ban Daisuke who also played Jiro in Kikaida (among many other roles including a character in The Ring movies.)  At first I have to admit I was a little disappointed.  The show wasn't bad by any means, but it does start out a bit muddled (even for a henshin show.)  Inazuman's abilities aren't clearly defined (he can apparently turn back time by shouting "Reverse!") and the costumes that Goro and the Youth League wear are laughably stupid.  The monsters are awesomely powerful too.  Creating the earthquakes is pretty normal for several and others can blow down skyscrapers and engulf an entire airport in sand in a matter of seconds.

Okay, none of the henshin shows are really believable, but this one called for more disbelief than most in the beginning.  Then, about a third of the way through, the show started growing and became much better.  The did away with the garish and idiotic Youth League costumes, the comic relief Marume was toned down, but most importantly the show became a bit more serious.  The shows become a tad darker when Goro discovers what happened to his mother 15 years ago.  This revelation affects the man deeply and it's the turning point in the show. 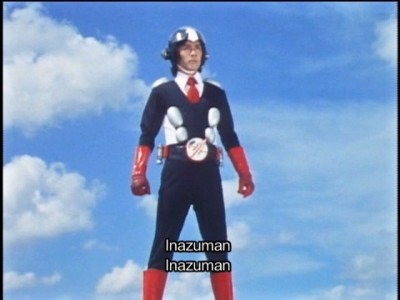 The last 2/3 of the series is really good, with Watari actually getting into trouble and some sticky situations.  In one of the better episodes Goro breaks his arm while battling some Fantom Army soldiers.  Because of this he can't go through the movements that change him into Sanagiman.  He's forced to rely on some Neo-human slaves to hide him and while he tries to rescue them all, things don't work out as he planned.  In another episode Watari falls in love with someone who turns out to be a Neo-human, with tragic results.

Of course one of the great things about tokusatsu shows are the creatures and this one doesn't let disappoint.  The monsters in this series are a lot of fun and colorful.  I love the wild designs and unusual powers that the writers come up with.  A favorite monster in my house is Gas Bambara from the wonderfully named episode "Terror of the Carnivorous Gas."  The glowing Mold Bambara is great too, and then there's Photo Bambara who can turn himself into an exact duplicate of Goro. 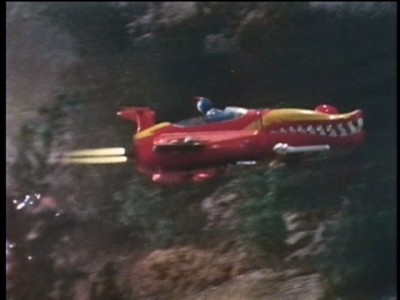 One other aspect of this show that makes it so much fun, though this was unintentional, is Inazuman's fighting word.  Many henshin heroes have their own version of a karate "Hi-ya!" that they use in battle, and this hero shouts "chest!"  I'm sure it was just a fun sounding noise to the creators in Japan, but hearing the star yell "Chest!" every time he hits a Fantom soldier in the chest add a bit of humor to the show.  The ending theme that has a background singer belting out "chest, chest, chest" is very catchy too and I find myself singing it at the oddest moments.

All 25 episodes of this show, the entire series, are presented on four single sided DVDs.  They come in two thinpacks which in turn are housed in a colorful eye-catching slipcase.

The show comes with the original Japanese audio track in two channel mono.  The range isn't great which isnt' surprising given the age of the show, and there is a slight bit of distortion now and again, but the dialog is easy to hear. The effects and music are strong and though I would have loved to hear this show in 5.1, this mix will do.  There are optional English subtitles, but there is not an English dub. 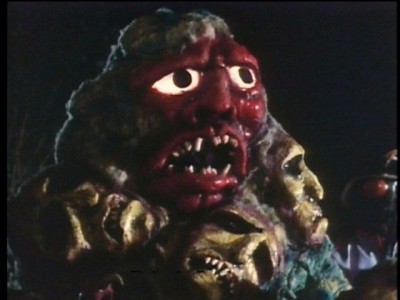 I viewed much of this series with my two sons, aged 12 and 16, and they didn't have any trouble reading the subtitles. Occasionally they wouldn't be able to finish reading before the word left the screen but this was the exception rather than the rule. I was also surprised to discover that the subtitles didn't diminish their enjoyment of the series. They never complained about having to read the dialog, and loved the show.

Originally airing in 1974 in Japan, the full frame image has been cleaned up and looks pretty good.  The transfer was done from a 16mm master, which is how the show (and many TV programs from Japan during this period) was filmed.  The picture is good and easy on the eyes though there is some of grain to the image which is assuredly inherent in the master used.  There was also a bit of dirt on the print, some spots here and there but nothing major. The colors look very nice and the colorful villains, not to mention Inazuman and his car Riajingo, are bright and vivid. The level of detail is generally fine, but some detail is lost in the dark scenes.  Ultimately this is a very nice looking set that has a better picture quality than the R1 Ultraman sets.

This set comes with a nice set of bonus items.  There are liner notes available on the discs for each episode.  These point out the bit actors for each episode and list the other shows they've appeared in along with some nice trivia. 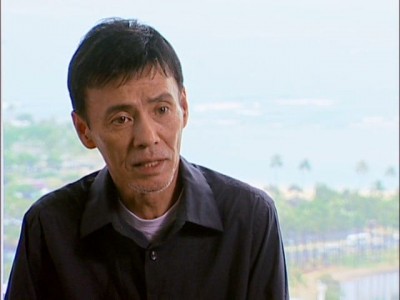 The fourth disc has the rest of the bonus material. There you'll find a 14-minute interview with Ban Daisuke who talks about his time on the show and what it was like working on this series and Kikaida 01 at the same time.  There's also a nice set of fan interviews that run 17 minutes.  Here people who originally saw the show recall their experiences and what impressed them about this henshin hero.

There are also two karaoke songs (that play during the opening and closing credits) with or without vocals.  (For some reason the subtitles to these songs are burned in rather than being removable, which is too bad.)  A short trivia quiz on the hero, character profiles, a Japanese promo spot and the series credits wrap up the extras.

This is a very fun and enjoyable series.  While Kamen Rider V3 is still my favorite JN Productions/Generation Kikaida release this was a great show too.  Though it started out a little bumpy, the show soon gets its sea legs and ends up being a fantastic program.  With a nice looking image and some nice extras, this set comes Highly Recommended.