The Criterion Collection // Unrated // December 16, 2008
List Price: $39.95 [Buy now and save at Amazon]
Review by Stuart Galbraith IV | posted December 11, 2008 | E-mail the Author
There are few movies as eminently watchable - and rewatchable - as Carol Reed's film of Graham Greene's comic thriller The Third Man (1949). It's a classic black and white film enjoyed by people resistant to classic films because while it captures a very specific time and sensibility, in all other respects it hasn't aged a day. The richness of its characterizations, as chiaroscuro'd as the bombed-out postwar Vienna in which it's set, make each subsequent viewing as rewarding, maybe more so, than the last. It's visually striking but with nuanced and adult character interaction, suggesting myriad little details easily missed the first time around.

The Third Man was one of Criterion's first laserdisc releases, from around 1985 or so; they released it to DVD in January 1999, and reissued it in May 2007 with more extras and a new transfer. And so here it is yet again, as part of the label's first wave of Blu-ray releases. To answer the obvious question first: Yes, even if you already own Criterion's DVD you'll want to rush out and get this. Though it's not as eye-popping as Warner Home Video's HD DVD and Blu-ray disc of Casablanca - The Third Man's surviving film elements aren't in nearly as good condition as that - the high-def transfer nonetheless brings out something missing from every previous home video version. Whereas even Criterion's DVDs captured the shapes and lines and shadings of Vienna's cobblestone streets and ornate architecture, the Blu-ray goes one vital step further: it captures the city's texture.

It also captures details on a level I've not seen even in 35mm theatrical prints: signage, labels, etc. are now all legible, and because of the enhanced detail I noticed something I never had before: a close-up of Harry Lime's police file is actually a pasted-together mix of studio photographs with a page ripped from assistant director Guy Hamilton's Daily Production Report! 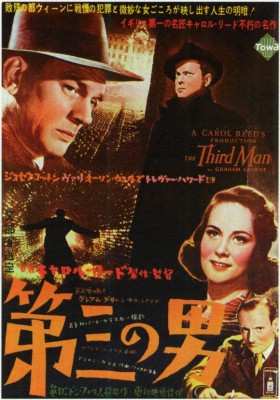 For the uninitiated, The Third Man is set Vienna, an early Cold War era hotspot divided into four zones: American, British, Russian, and French. Into this chaos arrives Holly Martins (Joseph Cotten), the author of popular but apparently not financially lucrative pulp Western novels. Martins has been offered a job by an old school chum, expatriate Harry Lime, whom Martins has not seen since the outbreak of war. He arrives only to learn that Lime is dead, struck down by a lorry while crossing the street in front of his palatial apartment. Lime's friend "Baron" Kurtz (Ernst Deutsch) explains that he and another friend, Popescu (Siegfried Breuer), carried Lime to the other side of the street where, dying, Lime left instructions to take care of Martins, as well as Lime's girlfriend, Anna (Alida Valli). Lime's physician, Dr. Winkle (Erich Ponto) arrived soon thereafter, by which time Lime had passed away.

However, the porter (Paul Hörbiger) in Lime's building, having seen the accident, tells Martins a very different story: Lime was killed instantly, he says, that there was no possible way he could have lived long enough to have made any final statements. Moreover, he insists, there was a third man at the scene who helped carry Lime's body to the curb.

Martins begins to suspect that perhaps his friend was murdered, and becomes friendly with the more resigned Anna, a minor theater actress, hoping to unravel the mystery. However, Major Calloway (Trevor Howard) encourages Martins to leave Vienna, arguing, like Anna, that Lime is better off dead, that Lime was not the kind soul Martins thinks he was, that he was an unscrupulous racketeer and murderer selling watered-down penicillin on the black market.

The Third Man is so good on so many levels, where to begin singing its praises? Watching it for probably the ninth or tenth time, I was struck by several things I hadn't really considered before. First, the film is quite unusual in that while many Hollywood and international films revolve around an American protagonist caught up in European intrigue and espionage, The Third Man's Holly Martins is unusual because he's incredibly naïve about absolutely everything, in a film populated by far more worldly characters.

He's naïve about Harry Lime, brushing aside Calloway's claims. He's naïve about the homosexual relationship between Baron Kurtz and Dr. Winkle, amusingly revealed through a pet Chihuahua they share. ("Is that your dog?" Martins asks Winkle.) He fails to understand the complexities of Anna's relationship with Harry; Martins is surprised (and, in a very American way, disappointed) to learn that she's using a forged passport Harry arranged for her. And he's oblivious to the fact that she's aware of Lime's criminal activities but loves him anyway. When asked to speak about his novels before a literary society, Martins finds himself totally out of his league; he doesn't even understand half their questions.

This naïveté of Martins is rather endearing, helped in no small way by Joseph Cotten's wonderful, Virginia-accented performance, less showy and perhaps less memorable than Orson Welles's brief but famous appearance in the film, but in many ways Cotten's is the more impressive. His credits include Welles's Citizen Kane, The Magnificent Ambersons, and Hitchcock's Shadow of a Doubt; he worked constantly in films and on television into the 1980s, and remains one of Hollywood's most underrated actors. He and the strikingly beautiful Valli (an icy brunette with piercing eyes, who'd get icier and gaze more piercingly over her long career) are wonderful together, a unique relationship with but a single common thread tying them together, a man with no use for either of them. (That he becomes attracted to her - but not the other way around - is another charming aspect of Martins' naïveté.)

(Spoilers Below) In recent years, some critics have intriguingly contrasted 1942's Casablanca's ultimate optimism with the postwar pessimism of 1949's The Third Man. Watching the film again, I was intrigued by a related undercurrent, like the water rushing through Vienna's cavernous sewer system at the climax, of refined anti-communism.

It's only suggested, but Harry Lime's dilution and sale of black market penicillin clearly is being condoned if not actively supported by higher-ups in the Soviet Zone. It's not clear exactly what Lime's relationship is with the Russians, but he's hiding out in their zone with their implicit support. Possibly turning in (Czechoslovakia-born) Anna was the price he paid for their cooperation, but there's also the hint that, indirectly, Lime and the Russians have shared interests, and that perhaps he's receiving money from them also. This would make the bizarre reworking of Harry Lime as a roguish hero on the subsequent radio series all the more ironic.

The dialogue is better than excellent - it's exquisite. The line about the cuckoo clocks is endlessly quoted, but the picture is wall-to-wall with great lines:

Martins: As soon as I get to the bottom of this, I'll get the next plane.

Major Calloway: Death's at the bottom of everything, Martins. Leave death to the professionals.

Martins: Mind if I use that line in my next western?

A personal favorite comes early on when the porter, who speaks only a smattering of English, tries to tell Martins of Lime's death:

Porter: He is now in Hell [pointing up], or...in heaven [pointing down].

Quite unusual for a (partly) American-financed movie of the period, about 15% of the dialogue is in German, that goes unsubtitled in the film. This makes sense, given that it's told from Martins' perspective, but viewed with English subtitles, it's just as good as the English dialogue. 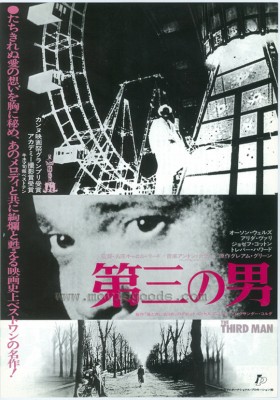 Licensed from Rialto Pictures and Canal+, Criterion's The Third Man draws its 1080p pillar-boxed transfer from 35mm fine-grain positive. (Supposedly the transfer is windowboxed, but if so it was imperceptible on my 45-inch plasma, except during the titles.) This is the original British cut of the film, with Carol Reed's (not Joseph Cotten's) opening narration, and the film is preceded by a British Board of Film Censors' seal. The image is great for reasons described above, a revelation for those of us who saw the film for the first time in those muddy (perceived) public domain prints.

The night-for-night photography is where the beauty of The Third Man in high-def really comes through. The blacks are like India ink, and the texture of sewer walls, the cobblestones, the fallen bricks in the middle of the sidewalks, the smoke of the cabarets, etc., add immeasurably to the overall atmosphere.

The English audio, mastered at 24-bit from the same fine grain master positive, is much cleaner than previous home video versions.

The packaging is compact but rather flimsy; mine arrived in the mail slightly crushed. The maxed-out disc took about three minutes to load on my Blu-ray recorder. The menu screens are intelligently designed and easy to navigate; like most Warner Home Video titles the extras are wisely and plainly described, and there's a "timeline" feature that helps the viewer not only pinpoint a particular scene, but also various chapters of each commentary track. Unlike Warner's Blu-ray titles if you hit the "stop" buttom you'll need to reload the who shabang.

Supplements are identical to the May 2007 DVD release. Carryovers from that release are: a Video introduction by writer-director Peter Bogdanovich; two audio commentaries: one by filmmaker Steven Soderbergh and screenwriter Tony Gilroy, and one by film scholar Dana Polan; a 90-minute documentary, "Shadowing 'The Third Man'" (2005); an abridged recording of Graham Greene's treatment, read by actor Richard Clarke; an hour-long episode of the BBC series Omnibus, Graham Greene: The Hunted Man; a 30-minute Australian documentary, Who Was the Third Man? (2000); a 1951 episode of the bizarrely conceived radio series of The Third Man, "A Ticket to Tangiers," and the 1951 Lux Radio Theatre adaptation of Reed's film: an illustrated production history with rare behind-the-scenes photos, original UK press book; the (really bad) U.S. trailer; Joseph Cotten's alternate opening voice-over narration for the U.S. version; archival footage of postwar Vienna; a look at the untranslated foreign dialogue in the film.

The best of the previously released extras is the 90-minute documentary, but it's also incredibly frustrating to watch. Directed by Frederick Baker, it features some wonderful footage of original assistant director Guy Hamilton and script supervisor Angela Allen revisiting all the original Vienna locations, and there's some marvelous archival footage of Graham Greene and others involved with the film's production. It's also honest about the bitter fighting between U.S. producer David Selznick and the Kordas, and also dispells long-held notions suggesting Welles may have directed large swaths of the picture. (Indeed, the documentary suggests Welles was an obnoxious prima donna.)

Unfortunately, a full third of the show consists of endless, ENDLESS shots of The Third Man being projected onto Viennese walls, on its famous Ferris wheel, and even through a glass of bubbling champagne. It's an incredibly clichéd device, and though visually interesting for about 30 seconds, it just goes on forever and ever, seriously damaging the rest of the picture.

Curiously, the DVD's thick booklet has been replaced by a rather thin one long on Blu-ray credits and which includes but one short essay, "The One and Only..." by Luc Sante.

Some consider The Third Man the finest British film ever made, and while this reviewer can think of three or four equally worthy contenders* it's certainly near the top of most anyone's list. This is an absolute must on Blu-ray - don't let the fact that this is in black & white and 1.37:1 format sway you; it's a major upgrade from the standard-def DVD. A DVD Talk Collector's Series title.