DJ Spooky's Rebirth of a Nation 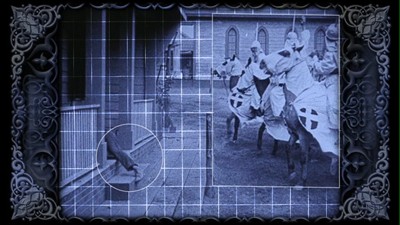 D.W. Griffith's 1915 silent epic The Birth of a Nation is a film with a rightfully notorious reputation. As a piece of cinema history, it is important in terms of its scope, ambition, and pioneering technique; as a piece of American history, it is an unctuous piece of propaganda, bending history and promoting stereotypes in service of a racist agenda. It only survives as a talking piece, both in terms of technical artistry and as a subject of an ongoing debate. It's hard to imagine any right-thinking person who would watch The Birth of a Nation as pure entertainment or even as a truthful depiction of history, though I am sure they are out there. Part of why a film like this should endure is to expose that kind of hateful thinking as long as it persists as a blight on our society.

When I first heard of Paul D. Miller's "remix" of The Birth of a Nation, now titled Rebirth of a Nation, I was more than intrigued. Miller is better known by his hip-hop stage name, DJ Spooky That Subliminal Kid. Under that banner, he has created ambient electronic music since the mid-1990s, and I even had the pleasure of seeing him live once sometime around the turn of the century. Backed by an impressive visual display, Spooky worked his turntables to create a stimulating concert experience. I've also heard him speak at length on the subject of sampling and collage-based, reconstructionist art. The idea that he would take a revolutionary cut-and-paste approach to this historically volatile movie seemed to have infinite potential. I envisioned a radical reworking of imagery to alter and expose the underlying dishonesty in the Griffith film, set to a provocative modern score.

Perhaps I expected too much, but the reality of DJ Spooky's Rebirth of a Nation fails to live up to the promise inherent in the concept (and, indeed, one alluded to within the film in Miller's explanations of his "DJ as director" philosophy). Shortening the Griffith film to nearly half its running time (187 minutes to 100 minutes; I'm surprised nothing was made of the original time's correspondence to the police code and eventual slang for murder, 187), Miller has streamlined it and shorn it of much of its overlong exposition, but he has actually done little to alter the film's narrative structure or the onscreen images. The most pervasive of his additions is an overly intricate frame around the film image that distracts rather than adding to the viewing experience. He also gingerly applies digital effects that highlight certain obvious details in the often complicated imagery of the movie.

More illuminating than any of the actual visual technique is Miller's intermittent commentary. Following a brief introduction that incorporates documentary and news footage from the civil rights struggles throughout the 20th Century as well as clips from a 1930 filmed introduction Griffith and Walter Huston made to go with later prints of Birth, Miller comes on occasionally to explain what we are seeing, adding historical and cultural context. He is sparing in his remarks, sometimes to the detriment of his point. For instance, he fails to support his claim that the melodramatic portrayal of Lincoln's assassination would forever alter the nature of propaganda. On the other hand, he leaves no ambiguity in regard to the parallels between the Northern occupation of the Southern U.S. and the conflict in Iraq, or the Ku Klux Klan's status as a terrorist organization. (I refer to the narrator as Miller, though the text is actually read by Richard Davis. It's kind of odd, actually, that Davis refers to Paul D. Miller and the remix project within the voiceover, as most would assume it's the writer/director speaking directly and thus it comes off as pretentious.)

As fascinating as Miller's explication can be, regular DVD viewers will recognize this as being no different than the audio commentaries or video essays that have appeared on other DVDs as bonus features. In this context, Miller's achievement here is no better than, say, the video pieces on Criterion's release of Renoir's Rules of the Game. Which isn't to say that this nullifies the quality of DJ Spooky's Rebirth of a Nation, but given how the project has built within it an argument for properly contextualizing art as commentary, I would suggest that this material doesn't really warrant its own stand-alone release, and would even be served better as counter-propaganda if it were included alongside the 1915 original as part of a fuller DVD package. The copy of Kino's The Birth of a Nation I rented in anticipation of reviewing Rebirth could actually stand with an upgrade with more substantive supplemental features.

The other aspect of Miller's "DJ approach" is, of course, the music, and I will say that here, Spooky does live up to expectations. His original score, recorded for the DVD release with no less than the Kronos Quartet, is marvelous. It manages to both enhance the movie in terms of its drama and also remind us of the modern context in which we are watching it. It can also underplay the action, such as the somber melodies Miller employs in the wake of victory as the picture closes. If Miller were to do more scoring for silent movies, I'd be all for it. Sergei Eisenstein once said that the score for Battleship Potemkin should be rewritten every twenty years in order for the film to maintain cultural relevance*; I think DJ Spooky on the right project (Metropolis, perhaps?) could really help make silent film come alive for a new generation. 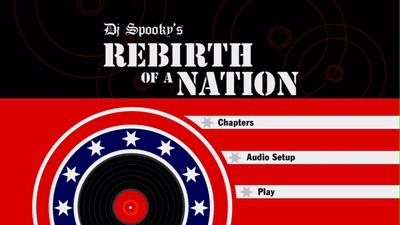 * As a side note, I'd love to see a comprehensive DVD compiling Potemkin scores from over the years that includes the most recent Pet Shop Boys soundtrack recorded in 2004.

Video:
DJ Spooky's Rebirth of a Nation is given a 1.78:1 anamorphic transfer that looks very good. In fact, I think in some ways the picture quality is cleaner than the 2002 Kino disc that I watched. The new elements, like the frame around the picture, are arguably even too clean, their crispness calling more attention to their presence in comparison to the rest of the movie. Kino's presentation was 1.33:1, so was this frame added just to draw the image out wider?

Sound:
Two Dolby audio mixes are available for viewers of Rebirth of a Nation: 5.1 and 2.0 surround. These tracks are excellent. The music is sharply rendered to ensure that it has maximum impact.

Extras:
Packaged in a standard keepcase, DJ Spooky's Rebirth of a Nation comes with a single-sheet paper insert with credits and chapter listings.

The only on-disc extra is an alternate audio commentary by writer/producer/director Paul D. Miller. Starting four minutes into the film, after the narrated introduction, Miller immediately goes into explaining what he hoped the project would inspire and how he approached the original material. Ironically, given my criticism that the main feature would be better as a supplemental feature, this supplemental commentary is far more meaty, going further into the creative philosophy of Rebirth and the full gamut of the ideas Miller pulled into the undertaking. I got more out of the explanation of the explanation than I got out of the original explanation itself! Miller knows both his cinema history and American history, as well as how image and sound work together. My only complaint would be the frequent, lengthy pauses Miller takes.

FINAL THOUGHTS:
Rent It. Film students and cinema junkies will find DJ Spooky's Rebirth of a Nation interesting for how Paul D. Miller, as a commentator and cultural historian, deconstructs the infamous D.W. Griffith film The Birth of a Nation, but those unfamiliar with the 1915 silent epic about the rise of the KKK will likely find this fairly straightforward "remix" a little dull. Though an interesting idea, the project is too slight to warrant its own release and would have been better served as a bonus feature within a larger package re-releasing the source material. 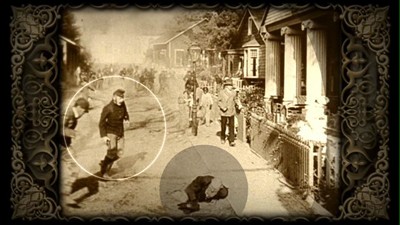