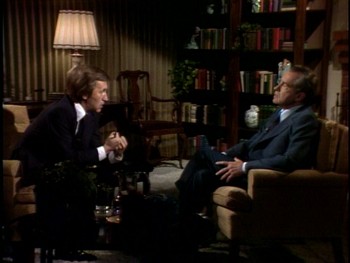 There is not a lot to sum up in terms of what Frost/Nixon: The Original Watergate Interviews contains. This is more of a historic document than it is a piece of cinema up for critical review. The DVD is primarily, after a short introduction from interviewer David Frost, the original 1977 television program featuring the British personality interviewing the former President of the United States about Watergate (other episodes covered other topics). It's an extraordinary use of the medium, one that holds as much fascination for what happened behind the camera as what was caught in front of it, leading of course to the play Frost/Nixon by Peter Morgan, the recent film adaptation of which likely lead to this DVD release.

Despite the accolades being received by the Ron Howard movie, one shouldn't assume that Frost/Nixon: The Original Watergate Interviews isn't full of drama all its own, or even now somehow superfluous. The sit-down between David Frost and Richard Nixon is an unprecedented piece of television journalism. Never before had a President granted so much access with so little control, and certainly the lesson future U.S. Presidents took from this was "Never again." Even if, say, George W. Bush was to open himself up to this kind of scrutiny, I'm not sure the current media machine would know how to deal with it. Filmed over several days and distilled for final release to just a little over an hour of footage, Frost/Nixon: The Original Watergate Interviews is composed of long pieces of the conversation between the two men. There is no quick editing, no cutaways to soothing scenes of Nixon walking by the Potomac and contemplating his fate, and no chopping the material up into easy-to-digest soundbites. Imagine, a day and age where the American public was given the benefit of the doubt for actually being able to sit still!

David Frost is a tenacious interviewer. Armed with a stack of research and less concerned with maintaining neutrality than he is with getting to the truth, he holds firm on various points about Watergate, refusing to let the President get off with easy answers or hazy conclusions. What one is really witnessing when watching Frost/Nixon: The Original Watergate Interviews is a battle of two intellectual wills, of two personality constructs on either side of a line ramming their charisma together until one will hopefully look more right than the other. Richard Nixon is actually rather charming and at times disarmingly human, far from the caricature he became in the decades that followed his near impeachment. A politician through and through, he does fall back on some snake-oil-salesman tactics, but Frost is vigilant about dismantling his defenses. This famously resulted in the moment where notes are dropped and the pair attempt to speak as plainly as possible, to say what conventional wisdom would tell us we would never heard said. Kudos, as well, to Frost for giving Nixon the last word in this installment, letting him speak for himself rather than trying to spin or contextualize the statements to match his point of view.

I haven't yet seen Morgan and Howard's Frost/Nixon to see how the recreation stacks up to the reality. I suppose if the filmmakers did their jobs correctly, it would be a little like how Gus Van Sant reportedly transformed the Rob Epstein documentary The Times of Harvey Milk into something akin to reality, but a dramatic step beyond it, when he made Milk. That said, to stop at the star-driven vehicle, to let the fictionalized version, no matter how accurate, speak for its predecessor is a bit of a disservice to the true moment, and to see them both together, one can fully appreciate how good or bad the simulacrum might be. With Frost/Nixon: The Original Watergate Interviews now readily available, there really is no excuse to not look at the whole picture. It's like staring at a painting of a famous photograph without ever seeing the photograph.

And in a pinch, shouldn't the real deal win out, anyway? 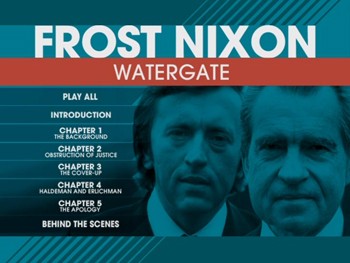 Video:
Shot for 1970s television, the Frost/Nixon interview is pretty much a barebones production. One set, maybe three cameras, no fancy lighting. The full frame image holds up surprisingly well, with very little by way of wear and tear. This means it only shows its age in the accuracy of its digital representation, which in a case like this, is actually quite a compliment.

Sound:
Like the video production, the original audio isn't much more than two men with microphones. In fact, you can tell how authentically the conversation was captured because a couple of times an airplane can be heard passing over the building where the interview was recorded. That the 2.0 mix keeps such details in, again, is probably a testament to the level of preservation bestowed on the source material. It sounds pretty good, there isn't any extraneous hiss or other faults.

Extras:
In addition to Frost's introduction, he reminisces about the sessions with President Nixon in material that follows the main program. These reminiscences run about fifteen minutes, and they can be selected from the main menu as "Behind the Scenes" or they run immediately after the show if you choose "play all."

FINAL THOUGHTS:
If you've seen the dramatized version, you should now see the real thing. Frost/Nixon: The Original Watergate Interviews is part of both television history and American history. Never before and never since has a U.S. President given himself over to such focused scrutiny. The disc may be somewhat barebones, but the material speaks for itself. Recommended. 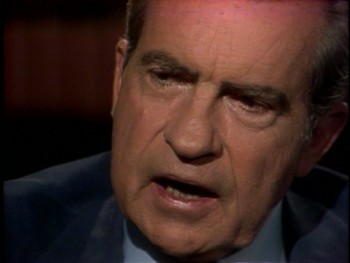