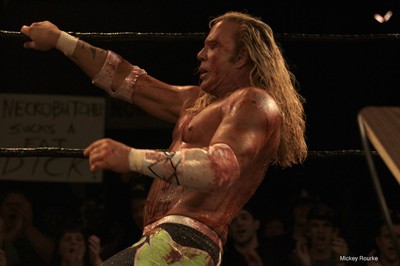 Critics love to call something "an American story." I know I've done it myself once or twice. Still, it's hard not to watch Mickey Rourke in the ring, playing washed-up wrestler Randy "The Ram" Robinson, trying to relive the glory of twenty years ago when he last fought his arch nemesis the Ayatollah (Ernest Miller), with his adoring fans serenading him with chants of "U-S-A! U-S-A!" and not think we're watching the rain barrel where the trickle down of the American Dream gathers.

Rourke, so far from his own 1980s glory days when he was a skinny, twitchy punk, has fully transformed himself into the Ram. Muscled up and meaty, with a face that has been pummeled in a boxing ring and under a plastic surgeon's knife, you'd barely recognize him as the raspy-voiced greaseball that method acted his way through movies like Angel Heart and 9 1/2 Weeks. The Wrestler serves as much as his redemption as it does his character's. I doubt anyone was expecting a showing of this order so late in his career--except maybe Rourke himself. If he's anything like the Ram, he always believed that he was meant to give audiences everything he's got.

Obviously, director Darren Aronofsky saw something in Rourke, as well. When last we saw Aronofsky's work on the silver screen, he was taking us through an ultra-personal, highly stylized philosophical vision. The Fountain turned me around on a director I had previously been nonplussed by, and he has only impressed me all the more by stepping from a time-spanning, effects-driven brain tease like that to something as gritty and raw and down to earth as The Wrestler.

Written by Robert D. Siegel, The Wrestler tracks the Ram at his lowest ebb, reduced to sparring for paltry sums in scaled-down weekend matches in American Legion halls, working the rest of the week on a loading dock at a supermarket. He can't make the rent on his trailer, he has to wear a hearing aid in one ear, and just about everything in his life is from the 1980s--his video game system, his stereo (look at that wall of cassette tapes!), and all the toys and memorabilia celebrating his former fame. The newer wrestlers still look up to him, but the game is changing, the fans aren't as prevalent, and it's getting harder and harder for the Ram to get by. 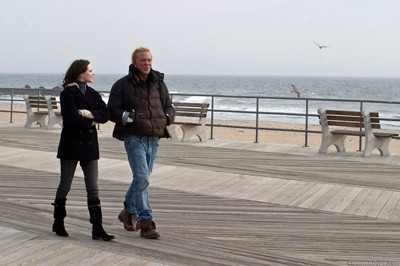 After a particularly extreme match where the ring is filled with barbed wire and breakaway glass, and where the Ram's opponent attacks him with a staple gun, Randy suffers a heart attack. His doctor tells him he will never wrestle again, and for the first time, the hard charger has to ease back and take stock. What he sees is about as ugly as the beat-up mug that stares back at him from the mirror. The only person he has to pour his heart out to is the aging stripper, Cassidy (Marisa Tomei), who only reluctantly lets him cross the line from customer to something more. Cassidy, who is a single-mother named Pam when off the stage, encourages the Ram to touch base with his estranged daughter (Evan Rachel Wood), even as she pushes his romantic advances away herself. The daughter, Stephanie, doesn't have much reason to give her dad another shot, but it's a shot he has to risk.

Aronofsky and cinematographer Maryse Alberti, whose credits mainly include documentaries and oddball indie fare like Velvet Goldmine, photographed The Wrestler to have a grainy, on-the-spot look. For the first several shots of the film, we don't even see Randy's face, instead following him from behind as he goes from backstage at his latest bout to his rundown home and mundane job. For all the glitz of professional wrestling that the Ram once experienced, the filmmakers have none to spare him here. The dreary weather of the nowhere town Randy calls home, the dark and gaudy bars where he drinks, even the abandoned beach where he takes Stephanie to reconnect--the world he lives in is as battered and bruised as the performer. He and Cassidy remember the shameless fun of 1980s hair metal, and declare that the overly serious 1990s sucked, but what has the 21st century offered up in exchange?

The heart of the movie is the stuttering romance between Randy and Cassidy, and Rourke and Tomei both manage tender performances that show that their characters have suffered defeats without making them appear pitiful. Both have struggled in their lives, both have ended up in places they never saw themselves going, and now that they are experiencing middle age, they have reasons to guard their hearts against trusting each other. When you're a screw-up, do you really need a screw-up just like you for a significant other? Aronofsky subtly draws his comparison between wrestling and stripping with a painful dual mis-en-scene that shows each performer realizing that they have been peddling their flesh for a high price that brings a low yield. Marisa Tomei has always been a fierce, daring actress, and The Wrestler should serve as much as a redemption for her as it does her co-star. She's been underused and undervalued since winning the Oscar for My Cousin Vinny, but for those of us who never counted her out, The Wrestler should prove to be ample vindication.

The major moments in The Wrestler are Rourke's alone, however. In his tear-filled apology to his daughter and his equally weepy return to the ring, as well as the disappointments he causes for and suffers from in relation to both of the women in his life, Rourke unleashes depths of agony that are brutal in their honesty. Again, here is a truly American story, a guy from nowhere working his way up from nothing, only to realize he has the same amount of nothing to show for it. A heart attack might be what the doctors call the malady that threatens to take this goliath out of the ring, but the rest of us see it for what it is--an old-fashioned, common variety broken heart.