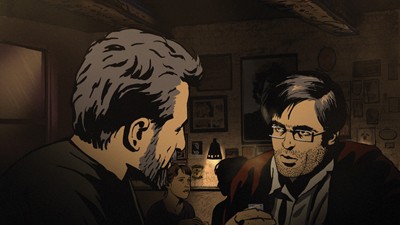 The new movie by Israeli filmmaker Ari Folman is a bit of a genre anomaly. Waltz With Bashir is a documentary, but it's also an animated film. It combines digital animation with more traditional drawing styles and video referencing to create a semblance of reality while also taking full advantage of the disconnect from reality felt by the movie's main subject, Folman himself. To turn his personal journey into a cartoon is not just a stylistic trick used to attract attention, but a decision firmly rooted in the kind of story he is trying to tell.

Before he became a film director, Ari Folman served in the Israeli army. At nineteen, he fought in Beirut, a facet of his life he has not thought about in the two decades that have gone by since. He has pushed it so far out of his mind, in fact, he can't recall a single event from the war with Lebanon, and so Waltz With Bashir opens not with one of his own recollections, but with an animated recreation of a recurring nightmare suffered by one of his friends. This other man is haunted by images of twenty-six angry dogs pursuing him, his subconscious hearkening back to a horrific experience he endured in the war. Pondering why his friend would be subject to such guilt when he is not, Folman unlocks something in his own subconscious, and that night he gets his own nightmare: an image of himself and two other men rising from the sea, naked except for their dog tags, and walking into combat on the night of a deadly massacre carried out to avenge the assassination of Lebanese President Bashir Gemayel.

The rest of the movie follows Folman as he digs deeper into his own past, interviewing psychologists and people who may have served in the army alongside him, questioning both the trickery of memory and the reality of what he is told. Long monologues from his fellow soldiers are brought to life in far more detail than would be possible in a regular documentary, putting us in each fighter's shoes, be it in a discothèque while on leave or on a beach being pursued by enemy combatants. Amidst this, Folman tries to decode his dream, as well as understand why the mind fills in gaps in memory the way it does. For instance, upon hearing that his friend was at the same nightclub he was, Folman adds his comrade into the cartoon, just as he would now be a part of Folman's memory of the evening. Just as everything in Waltz With Bashir is now part of the audience's memory: we saw it, it has happened to us.

The animation in Waltz With Bashir is an interesting combination of traditional art styles and current technology. Some of the computer tricks the animators employ work quite well, including sweeping moves from one location to another, traversing time and space. Waltz With Bashir works best when borrowing more from the fine arts, however, such as lonely visions of men at sea or of Folman sitting in a Dutch countryside with one of his interview subjects, the landscape alive with unnatural colors. (Much of the color scheme should be familiar to fans of Asaf and Tomer Hanuka, who did some of the designs for the production.)

Surprisingly, where the animation struggles most is in how it portrays the human element. Faces often look devoid of emotion, and the animation team seems to have no clue how to make their figures look like they are actually walking at a normal speed through a specific space. While I realize that there is an intentional gulf here between the abstraction we see on screen and what a true documentary might actually look like, I don't believe that some of these quirks were by design. Similarly, Folman makes a few clumsy storytelling choices that damage the integrity of the narrative. An overlong indulgence in a joke about an Army officer watching porn and a soldier playing air guitar on his rifle, leading to a full-on music video sequence, are too "cartoony" for their own good. Likewise, some ideas aren't pursued to their full conclusion. A ghostly image of Folman's ex-girlfriend is never fully integrated into the story, and whether Folman's dream has any basis in a real event is still pretty much a mystery.

Yet, despite all its faults, Waltz With Bashir is an extremely effective use of two disparate mediums--documentary and animation--to explore the links between "what really happened" and "what we think happened," and how easily truth is altered on the way. It also delivers a startling emotional punch in bringing home its message about the dehumanizing effects of war. For all of the atrocities we see in colorful animated detail in Waltz With Bashir, it doesn't really hit home with its full force until Ari Folman at last reconnects with the reality of what he witnessed. The final moments of the movie are unsettling, and they are sure to follow you out of the movie theatre the way they have followed Folman and his fellow soldiers off the field of battle. Waltz With Bashir is cinema as an act of collective memory. 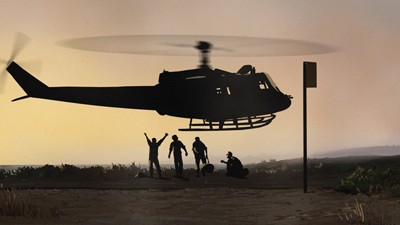