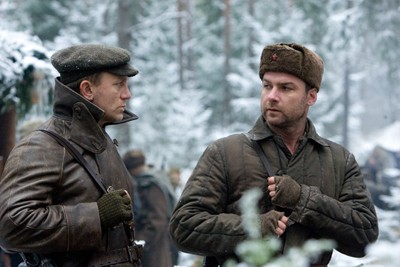 For his latest feature, Defiance, director Edward Zwick has dropped any "Based on a" disclaimer from the front of the credits and instead simply stated that this World War II drama is "A True Story." The director of such sensitive and self-important dramas as The Last Samurai and Blood Diamond may have had no reason at all for changing the expected wording, or he may have done so as his own act of defiance, to dare us to challenge the cheeseball antics that drag this movie into the mawkish muck.

Defiance starts well enough. It's the tale of the four Bielski brothers who escaped the Nazi invasion of Belarussia by running into the forest and hiding. Cut from the same convenient cloth as most people who lived through WWII apparently were, these four brothers each serve to represent a basic type. Oldest brother Tuvia (Daniel Craig) is the most levelheaded, while second-down-the-line Zus (Liev Schreiber) is as hotheaded and action oriented as his ribald namesake (it's pronounced like "Zeus," the Greek god). In third place is Asael (Jamie Bell), who stands poised to be either one or the other, depending on which brother he admires and learns from more. And then there is the youngest, Aron (George MacKay), who is the wide-eyed innocent who doesn't speak for several weeks after seeing his parents slain, only to finally break his silence when everyone needs to be shocked back to their senses. And that's all Aron does, actually. He doesn't even warrant and end-of-movie footnote to tell us what happened to him next. Sucks to be the baby of the family, I guess.

Once in the forest, the Bielksies end up attracting other Jews on the run, and they set up a camp that serves as a safe haven for their people. All told, these numbers eventually crested over a thousand, and as we see in the movie, staying alive is no mean feat. Keeping a bare-bones community from disintegrating while always trying to stay a move or two ahead of the men with guns would prove a challenge for even the most stalwart of individuals. Naturally, every Bielski of a certain age meets a lovely lady to be their "forest wife," which is different than the "village wife" they left behind (and, sadly, lost to the war). Even these ladies conform to expected clichés: Asael meets a fair-skinned girl (Mia Wasikowska) who is blossoming the same way he is, Zus locks eyes with a tough gal with a bad haircut (Iben Hjejle), and Tuvia scores with the aristocrat (Alexa Davalos), who could maybe share whatever cache of shampoo and conditioner she's been using to keep her locks so lovely, because Zus' lady is in dire need.

The Bielski boys initially conduct raids on the Germans for purposes of vengeance, until survival becomes more important. Then they go into town to liberate food. Eventually, Zus and Tuvia butt heads, as Zus doesn't think they are doing enough. He joins with an independent brigade out of the Red Army, fighting the real war while Tuvia's numbers swell and he must push to keep the camp together through a harsh winter. Oh, those harsh winters, they can be many a movie's undoing. Boredom and suffering always fall with the snow, making it tough for even a good film to maintain any interest, and it's next to impossible for a mediocre one like Defiance to stay alive until spring.

Again, Defiance starts out fine enough. The dialogue, courtesy of Zwick and Clayton Frohman, is often laughable, and there are moments where the plotting leaps over logical connecting points, making its forward movement seem choppy; yet, the basic story of the Bielski camp is compelling enough unto itself to keep it moving. The longer the film runs, however, the slower it gets, fueled only by an expected sentimentality that countless similar war stories have instilled in the collective unconscious. Zwick spends the movie's two-hour-plus running time stressing that we should see a connection between the Bielski boys taking the Jews out of Belarussia and Moses leading them out of Egypt, but like every other hackneyed device in this hackneyed script, it doesn't quite need the heavy push Zwick gives it.

Daniel Craig is horribly miscast as Tuvia. The distinct quality of nothingness that makes him so appealing to James Bond fans doesn't really fit here. (Though, apparently it works on the ladies, as Tuvia manages to share some sweet nothings with his forest wife by the glow of the fire. All that's missing is the bearskin rug.) Jamie Bell is fine as Asael, though even he must be tired of seeing himself in coming-of-age roles by now. This leaves Liev Schreiber as the only acting surprise in Defiance. Though he is normally cast in the thinking, brooding role, he is more than formidable as the man of action. I finally understand how he landed the role of Sabretooth, Wolverine's rival, in the upcoming Hugh Jackman movie.

Then again, everything is upside down in Defiance, so why should the casting be any different? For most wartime survival films, the eventual gunfight that comes at their climax serves as the movie's second wind. Not so in this picture. The battle scenes are the least interesting parts, and they are where Zwick's reliance on that collective nostalgia proves to be the albatross around Defiance's neck. All of the action seems like it was cut and pasted from other movies, from the part where a bomb goes off near Tuvia and causes his ears to ring and the camera's shutter speed to slow down to the way the intellectual finally taking up a weapon and charging into battle only yields ironic results. At one point, when filming a raid Zus and Tuvia carry out on a police station, Zwick even starts to channel Wong Kar-Wai, shooting the carnage in a blown-out, slow-mo style for no reason whatsoever.

It's just another clumsy move in a series of clumsy moves, making for one clumsy, overlong, and ultimately boring movie. It's not the worst thing you will see this year, it's far too average to be that bad, but the fact that Defiance sits so comfortably at the middle of the pack, one has to wonder if Edward Zwick even understood the point of his own movie. Somehow "nothing is impossible" and "never give up" became "settle for being merely sufficien