Acorn Media // Unrated // January 20, 2009
List Price: $99.99 [Buy now and save at Amazon]
Review by Stuart Galbraith IV | posted January 6, 2009 | E-mail the Author
After slogging through a batch of deadly dull Inspector Alleyn Mysteries back in 2005, I was more than a little wary of other low-key, understated British mysteries shows. But I had always enjoyed the work of Peter Davison, the star of The Last Detective (2003-2007); American viewers may remember him as Tristan Farnon in All Creatures Great and Small, or as Campion. He had a strong following as the Fifth Doctor on Doctor Who, though in recent years he seems to have slipped in the rankings among that show's fan base. (I thought he was fine, but the show was going downhill at that point.)

Davison creates another memorable characterization as The Last Detective, but it's the show itself that's the real surprise. Yes it's low-key and eccentric, and while some of the eccentricities don't quite work - they're a bit spoon-fed to the audience and aren't really necessary - the general tone of the program and Davison's character are unique and the series compelling and very satisfying.

Acorn Media's Complete Collection culls material from four series sets released individually during 2006-08 into one compact package: nine DVDs plus an interesting bonus program (more on that later). Acorn's DVDs tend to be pricey, and this retails for $99.99, though that's still a considerable savings from the individual sets ($39.99 x 4= $159.96). 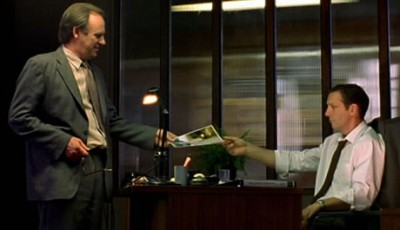 Based on a short series of novels (just four to date) written by Leslie Thomas between 1976 and 1998, The Last Detective stars Davison as CID (Criminal Investigation Dept.) officer DC (Detective Constable) "Dangerous" Davies. The "Dangerous" is a joke, for Davies is a mild-mannered, gentle, middle-aged man whose personality sharply contrasts the younger, cockier, and more intimidating detectives at his office in Willesden, a predominantly Irish, slightly decaying borough in North West London.

As if one nickname weren't enough, Davies is also called "The Last Detective" by his boss, the openly alcoholic DI Aspinall (Rob Spendlove), because whenever there's a serious case to be solved, Davies is the last detective he'd send on the job. As a result, Davies is frequently assigned demeaning busy-work no one else wants, like going through the scraps of dirty paper obsessively collected by an old homeless person who fell into the local canal and drowned. And yet from these unpromising cases clues to an unsolved murder will turn up, or what looks to be a routine case of suicide becomes a homicide investigation thanks to Davies's doggedness and determination.

Davies is recently separated from wife, Julie (Emma Amos, who resembles a young Diana Dors), and they share custody of their dog. Newly single, Davies spends much of his free time with unmarried Mod (stand-up comedian Sean Hughes), an incorrigible eccentric who moves from one dead-end job to the next, sort of an Irish Cosmo Kramer.

In one of the early shows, someone remarks to Davies that compared to other detectives he's "a good listener." That pretty much sums it up. In a harsh world where caustic, overworked detectives don't have time to waste on the elderly, the homeless, or racial minorities, Davies is the kind of person who can get along with just about everyone, including the criminal classes he has to send to the nick. The Last Detective is unusually humanist for a detective/mystery series; Davies is a gentle man who likes listening to people talk about their lives. He's not impatiently waiting for victims so he can cut to the chase and get on with his job.

Despite what it says on the DVD box, Davies isn't "bumbling," certainly not in the Inspector Clouseau sense. He's a good detective assigned minor cases, which more often than not he solves using simple logic and a lot of leg work that's probably much closer to how real London detectives operate.

Not that he isn't continually frustrated by obnoxious co-workers, an estranged wife who takes advantage of his generous nature, and even by victims whose crimes he investigates. In a fascinating and unnervingly real early episode, "Tricia," an armed robbery victim (Eleanor David) is alternately exceedingly rude and overwhelmingly gracious with Davies, until it becomes clear that, victim or not, she is compulsive and obsessively suspicious, eventually following Davies's every move. It's a creepy, clinically authentic episode.

Another show, featuring the one-of-a-kind Siân Phillips (of I Claudius fame), likewise rings true as a portrait of the loneliness of old age, and how relationships change over time. The episode also features two real oddballs, an unattractive nurse and her undertaker brother, in eccentric but realistic characterizations one would more expect to find in an Errol Morris documentary than a British mystery show.

The Last Detective is presented in 16:9 enhanced widescreen, and appears to have been shot on film (and possibly finished digitally). In any case, the series has a nice film look about it, and the transfers are good. Episodes have running times similar to Columbo; most run about 70 minutes, though a few are closer to 95 minutes. The single-sided, dual-layered discs have two episodes on each of the first six discs, with three on the seventh, two again on the eighth, with a ninth disc set aside for its bonus film. The Dolby Digital stereo on the shows is up to contemporary British television standards. There are no subtitle options or alternate audio.

The Peter Davison series was preceded by a 1981 television film, Dangerous Davies: The Last Detective starring Bernard Cribbins (recently seen on the new Doctor Who, along with Davison come to think of it), and based on the same story as the first episode of the Davison series. Directed by Val Guest, it's got a great cast including Bill Maynard, Joss Ackland, Bernard Lee ("M's" final role), John Leyton, Patsy Rowlands, Colin Baker, and others.

The Last Detective is one of the best detective/mystery shows I've seen in a while, the kind of thing you want to spread out over several months, but which you end up gorging on at a rate of almost one-a-day. The compelling characters, regulars like Davison and Hughes but also its guest stars, keep it interesting, and Davison's fine genial performance make this one a winner, a must-see for mystery fans. Highly Recommended.