The Criterion Collection // R // January 6, 2009
List Price: $39.95 [Buy now and save at Amazon]
Review by Stuart Galbraith IV | posted January 3, 2009 | E-mail the Author
In the more than 20 years that have passed since the release of The Last Emperor (1987), like its title character perceptions about the film have been altered by changing events around the world: the increased openness of China, for instance, which is no longer has quite the "Oriental mystique" it once had, and in the way westerners watch movies. Back in 1987, Asian movies were pretty much limited to Bruce Lee and Godzilla, with a tiny handful of Kurosawa and Hiroshi Inagaki movies at larger corner video stores. Everything was VHS; John Woo and the rediscovery of Hong Kong cinema hadn't yet hit American shores, and Zhang Yimou's debut film Red Sorghum (1987), among the very first Chinese productions widely distributed in the west, was still a year away from its U.S. release.

And so now, in 2009, looking at The Last Emperor is a somewhat strange experience. What we now called Beijing is here called Peking, for instance. Some of the dialogue is in Mandarin, but most of the time the Chinese characters talk to one another in British-accented English, and a few of the actors are obviously dubbed. The Empress Dowager appears in the film briefly, and though played by an Asian actress (Lisa Lu), both in her manner and in her accent she reminded me a lot of Flora Robson, who essayed the role in 55 Days at Peking (1963). Back in 1987, unless you happened to be Chinese all this seemed a perfectly natural, but today it comes off as a bit strange. If he made The Last Emperor today, would director Bernardo Bertolucci shoot it in Mandarin?

In the end, The Last Emperor still fascinates; in a way it's a movie of its time about another time in history, a European's mid-1980s perspective of early 20th century China. It's spectacular with much visual poetry, like most of the great film epics it's an intimate character study with monumental history constantly swirling around its protagonist.

Criterion released the film to standard-def DVD with a mountain of extra features less than a year ago, in February 2008. The Blu-ray edition (with an SRP of about $20 less than than the DVD) features exactly the same supplements, but with a few omissions. The Blu-ray includes only the 165-minute theatrical edition (with exit music at the end) that Bertolucci prefers, and not the 218-minute extended television version. And like Criterion's Blu-ray of The Third Man, the booklet has been cut way back, an essay by David Thompson being the only significant carryover.

The film is presented in a controversial 2:1 aspect ratio; Criterion wanted Bertolucci's approval on the transfer and he deferred to cinematographer Vittorio Storaro, who prefers 2.00:1 to the original 2.35:1 Technovision aspect ratio in which it was shot. This results in much awkward framing here and there (the edges of the frame slicing characters down the middle in some shots), though it's not ruinous. In some shots, a slight squeeze appears to have been added to avoid the worst of this. As was the case when it was in theaters, the Blu-ray is awfully grainy at times; at times the skies above the Forbidden City resemble the CGI-generated windstorms in Twister. 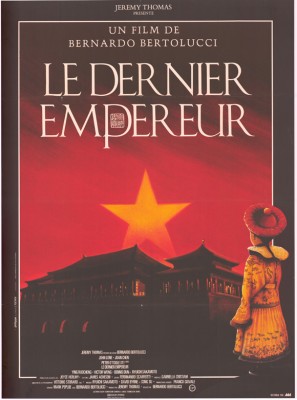 The film is mostly told in flashback from the perspective of 1950, when Pu Yi (John Lone) is repatriated from a Soviet gulag back to his native China, now the People's Republic. Sent to a prison and interrogated for his association with the Japanese during World War II, Pu Yi recalls his life, from his entry into the Forbidden City and coronation at the age of three, his early education and relationship with English tutor Reginald Johnston (Peter O'Toole), and his unhappy marriage to Empress Wan Rong (Joan Chen).

The film also traces Pu Yi's largely powerless reign and brief restoration during the warlord-dominated years of the Chinese Republic, and later his manipulation by Japanese invaders who made him a puppet emperor of Manchukuo until the end of the war.

Mostly though, The Last Emperor is a compelling portrait of isolation and loneliness, of being the powerless ruler of an empire one is simultaneously utterly detached from, resulting in undeveloped or malformed social skills and psychological problems. The unenviable lives of these indulged ("If I am naughty one of them [pointing to peasants] is punished.") but powerless people shrouded in mystery continues to fascinate; Ben Hills's recommended Princess Masako - Prisoner of the Chrysanthemum Throne offers a similar contemporary example. When The Last Emperor is as isolated as Pu Yi, when the story is confined to the Forbidden City, with only the slightest hints at the world outside, it's close to perfection. Particularly good are all the scenes with Peter O'Toole as Pu Yi's wise but also frank British tutor. Those scenes made the strongest impression on this reviewer when The Last Emperor was new and they made the strongest impression seeing the film for the first time in 20-plus years. Being an outsider, especially as a non-Chinese, Johnston is able to speak plainly (and at times, critically) in a way no one else can. He's diplomatic in his handling of the emperor but also savvily aware of the rampant corruption among Pu Yi's eunuchs and other handlers. O'Toole's appearance make comparisons with the similarly cross-cultural Lawrence of Arabia inescapable, and yet O'Toole's scenes in this are on the same high level as David Lean's great epic. Criminally, perennial bridesmaid O'Toole wasn't even nominated for an Oscar.

To some degree, The Last Emperor loses momentum once Pu Yi leaves the Forbidden City and unwisely allows himself to be used by the Japanese invaders. Perhaps this is because the focus shifts away somewhat from Pu Yi to his opium-addicted wife and her relationship with Yoshiko Kawashima (Maggie Han), the unapologetic Chinese-born, Japan-raised "Eastern Mata Hari." Though interesting, the film would have played more unified if it had stuck more to Pu Yi's perspective, particularly as that character's ignominy, growing complacency and internalized isolation are the backbone of the film.

Still, The Last Emperor is a monumental achievement of "tourist" cinema in the good sense, as David Thompson calls it. To see the Beijing locations, particularly its wide vistas of the real Forbidden City spectacularly populated with extras in early 20th century costumes, all without the aid of CGI is a treat. That it does so with imagination, historical accuracy, and extreme intelligence and taste is an impressive achievement. 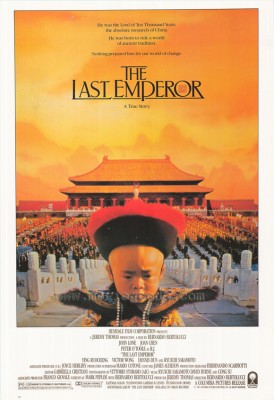 U.S. distributor Columbia Pictures having lost the home video rights many years ago, Criterion was able to license this (for them) surprisingly high-profile release directly from producer Jeremy Thomas (Naked Lunch, Gohatto, Tideland). The 50GB disc presents the film in the aforementioned controversial 2:1 ratio (see above) using the camera negative (originally held at Technicolor Rome, apparently) for its transfer. The titles, designed by 007 regular Maurice Binder, are a bit soft and wobbly, though that may be inherent to the lab work. In high-definition, the viewer can appreciate the texture of the many silks and red-painted wood, but the high-grain, extreme in some shots (particularly most shots of the sky above the Forbidden City) is plainly visible.

Except for the deletions mentioned above, supplements - all in standard-def - are identical to the February 2008 standard-def Criterion DVD release: an audio commentary featuring director Bernardo Bertolucci, producer Jeremy Thomas, screenwriter Mark Peploe, and composer-actor Ryuichi Sakamoto; "The Italian Traveler: Bernardo Bertolucci," a 53-minute film by Fernand Moszkowicz tracing the director's geographic influences, from Parma to China; Video images taken by Bertolucci while on preproduction in China; "The Chinese Adventure of Bernardo Bertolucci," a 52-minute documentary that revisits the film's making; a new, 47-minute documentary featuring Storaro, editor Gabriella Cristiana, costume designer James Acheson, and art director Gianni Silvestri; a 66-minute BBC documentary exploring Bertolucci's creative process and the making of "The Last Emperor"; a 30-minute interview with Bertolucci from 1989; a 2008 interview with composer David Byrne; a 2008 interview with Ian Buruma examining the historical period of the film; and a panned-and-scanned theatrical trailer in poor condition.

On my player "The Italian Traveler: Bernardo Bertolucci," defaulted to French-only, and would not play with English subtitles.

Those who purchased Criterion's standard DVD version 11 months ago understandably may be a bit miffed at the notion of double-dipping for the admittedly slight (not revelatory, like The Third Man) upgrade to Blu-ray, while those who skipped the Criterion DVD edition may feel slighted that Bertolucci's longer version of the film and some of the essays from the DVD are omitted here. But it's a great film that in 20 years has dated in some respects while in others plays more impressive than ever, and the presentation just about maxes out the film's potential in high-def - though the 2:1 aspect ratio ultimately hurts more than helps - and the extras are impressively voluminous and informative. A DVD Talk Collector's Series title.