Confession time: I'm not a lifelong fan of the Western. I have no memories of seeing them regularly in theaters growing up, because...well, there really weren't many in theaters during the 1980s. The genre has simply decreased in popularity over the last few decades, though it's enjoyed resurgence in recent years. A number of modern efforts, each seemingly declared "The Best Western Since Unforgiven", have arrived to mixed reviews and generally unimpressive ticket sales. Some offer revisionist takes on the genre, while others follow "the rules" more strictly. With the arrival of 3:10 to Yuma and The Assassination of Jesse James by the Coward Robert Ford last year (among others), it seemed as if Westerns were finally climbing back in the saddle. Ed Harris' Appaloosa (2008) continues the trend nicely: based on Robert Parker's 2005 novel of the same name, this tale of shotguns, survival and sacrifice serves up familiar Western elements with respect and admiration.

Within the genre's confines, Appaloosa plays is relatively straight: the bad guys are bad, and the good guys...well, they simply do what it takes to get the job done. Our heroes are Virgil Cole (Harris) and Everett Hitch (Viggo Mortensen), two partners who have worked together for an unspecified number of years. The bottom line is that they're very good at what they do: keeping the peace, even if it means creating their own laws to do it. Peace is just what the southwest town of Appaloosa needs, especially after a marshal and two deputies turn up missing. Cole and Hitch are quickly hired by the desperate town leaders, who agree to their terms and practically sign over collective authority in a matter of minutes. The suspected murderer is Randall Bragg (Jeremy Irons), a nearby rancher with a substantial following and a history of stirring up trouble. Cole's situation is complicated further by the arrival of Miss French (Renee Zellweger); he's quickly attracted to the mysterious woman, but a normal relationship would prove difficult in such dangerous times.

Appaloosa's listed running time is 115 minutes, but this slow-burning tale feels much longer. The story's somewhat unconventional format---thanks in part to an abrupt change in direction roughly halfway through---often leads to a more episodic feel, but that's hardly a complaint. Harris' capable direction keeps things flowing quite nicely, while Dean Semler's excellent cinematography ensures that plenty of terrific sights will be seen along the way. A strong emphasis on detail and accuracy, from costume design to weaponry, ensures that Harris' adaptation is anchored squarely in a 19th century atmosphere. Simply put, Appaloosa follows more Western traditions than most other recent genre efforts, strictly favoring reverence over revision.

Even so, a few key elements prevent Appaloosa from reaching greater heights. Little to no background information is given for several major characters; this may actually be favorable to some viewers, but the one-dimensional nature of Bragg feels more predictable than it ought to. Miss French's arrival and subsequent role is also a bit confusing: it's tough to believe that a man as dedicated as Cole would pursue a relationship during such unfavorable times. Instead of creating an easy target for Bragg's henchmen to aim for, perhaps Cole should've completed his job before chasing after a personal life. Luckily, the performances of Bragg and Zellweger are strong enough to hide some of these glaring faults, but such elements create a more convenient story than what audiences actually deserve. Even so, Appaloosa does much more right than wrong: it still shines brightly as a strong period piece and a genuinely rousing adventure.

Presented on DVD by New Line Home Entertainment, Appaloosa arrives in near-record time after a short theatrical run. There's good and bad news here, but this one-disc package should still please most fans of the film. Boasting a decent technical presentation and a handful of low-key but appropriate bonus features, it's a strong package that defies the film's modest box-office receipts. Simply put, those even mildly interested in the film should consider Appaloosa a worthy effort on DVD. Let's take a closer look, shall we?

Presented in its original 2.35:1 aspect ratio and enhanced for 16x9 displays (NOTE: a pan-and-scan version is also included on the same side), Appaloosa looks very good from start to finish. The inclusion of both versions on this dual-layer disc leads to a few mild compression artifacts along the way, though other digital problems are kept to a minimum. The film's muted, dry color palette has been preserved nicely, black levels are typically solid and image detail is generally consistent. Fans shouldn't find too much to complain about overall, though New Line's continued support of pan-and-scan is quite irritating.

In the audio department, Appaloosa hardly disappoints as well. The Dolby Digital 5.1 Surround mix does its job perfectly; though dialogue carries most of the film, atmospheric effects and occasional bursts of action fill the rear channels nicely. The dynamic range is also excellent, while music and other sounds rarely fight for attention. English captions and Spanish subtitles have been included during the main feature only. 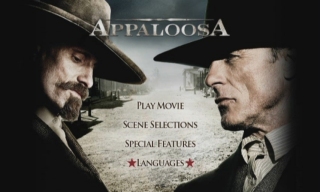 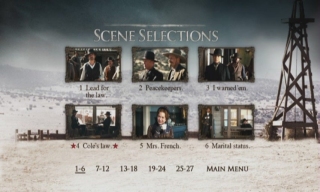 Seen above, the plain-wrap menu designs are basic and easy to navigate. The 115-minute main feature has been divided into 27 chapters, while no obvious layer change was detected during playback. This one-disc release is housed in a standard black keepcase and includes a Digital Copy promotional insert (see below).

Bonus Features
Leading things off is a feature-length Audio Commentary with director Ed Harris and screenwriter/producer Robert Knott; as expected, Harris does most of the talking. In fact, those who don't hang on every word may not even be aware that Knott is present, though he adds an interesting dynamic during his brief spurts of participation. Harris is quite low-key himself, mainly limiting his comments to general production stories and pointing out some of the lesser-seen supporting characters. Overall, fans will find this commentary worth a listen, but it's nothing to write home about.

Up next are four brief Behind-the-Scenes Featurettes, beginning with "Bringing the Characters of Appaloosa to Life" (7:33, below left). This light but entertaining segment features key members of the cast and crew (some in costume, even) briefly detailing their experiences on set. "Historic Accuracy of Appaloosa" (10:21) focuses on the costumes, weaponry, production design and overall attention to detail, while "The Town of Appaloosa" (5:08, below right) provides a quick tour of several key locations. Also here is "Dean Semler's Return to the Western" (5:17), in which the famed cinematographer discusses his attraction to the film and shares a few techniques along the way. 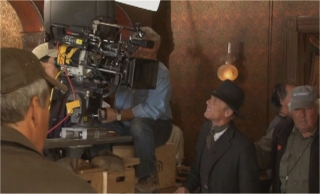 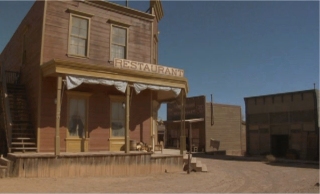 Last but not least is a collection of Deleted Scenes (6 clips, 12:03 total), many of which were hinted at during the audio commentary. Most of these are minor character moments and were wisely trimmed from the theatrical cut, though they're certainly worth a look. These scenes are also available with commentary by Harris and Knott; the former hints about their inclusion in a possible Director's Cut of Appaloosa, which would probably be a step in the wrong direction.

As a footnote, also included (but not advertised on the outer packaging) is a Digital Copy of the film...or at least a code for owners to download it manually. All bonus features are presented in non-anamorphic widescreen and 1.33:1 format, while no optional subtitles or captions have been included. It's not a bad little spread of extras overall, though nothing really stands far above typical DVD fare.

The recent resurgence of Westerns on the big screen has led to a number of memorable films, so its good to know that Ed Harris' Appaloosa stands tall among them. Low-key and straightforward but hardly dull, this tale of friendship and loyalty during lawless times was relatively unseen during its brief theatrical run. Harris' capable direction is matched by strong performances by Mortensen, Irons and company, while the film's reverence for classic Western traditions is evident every step of the way. New Line's almost straight-to-DVD turnaround time yields a relatively solid package, boasting a decent technical presentation and a handful of mildly entertaining bonus features. Casual fans may be satisfied with a rental, but die-hard disciples of the Western should consider a blind buy. Recommended.

Randy Miller III is an affable office monkey based in Harrisburg, PA. He also does freelance design projects and works in a local gallery. When he's not doing that, he enjoys slacking off, second-guessing himself and writing things in third person.