Note: Though the main body of this review was written for the Funny Face - 50th Anniversary Edition DVD released in October 2007, the technical details all pertain to the new 2009 Centennial Collection version. 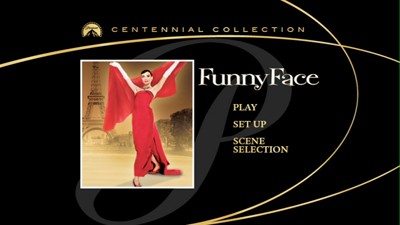 Of the two musicals Audrey Hepburn made, it seems that My Fair Lady gets the most attention, but I personally prefer the far more carefree Funny Face to that stodgy old ball of corn. Though both are ostensibly the same kind of Cinderella story that Ms. Hepburn's fame and reputation are built on, she was better suited to the light-hearted nature of this 1957 vehicle. Her character is more quirky than pitiable, and Paris fits her better than London. She was, after all, the ultimate Givenchy girl, and the fabulous designer dresses the actress here, teaming with Edith Head to give Funny Face one of cinema's most delectable wardrobes.

Funny Face has been available on DVD since 1999, but to celebrate the film's birthday in 2007, Paramount released a 50th Anniversary Edition in the style of their Breakfast at Tiffany's reissue from a couple of years prior. This meant a pinker package, and a couple of added bonuses, though sadly Jo Stockton didn't quite get the red carpet treatment Holly Golightly did. The new Centennial Collection edition matches the style of that new line of Paramount reissues, and there are more extras, though surprisingly not entirely Funny Face-oriented ones.

Directed by the always impressive Stanley Donen, featuring songs by the Gershwins, and borrowing from the life story of Richard Avedon (who also did the photo manipulations in the movie), Funny Face has all the right ingredients as a musical vehicle for its two stars. Fred Astaire plays the Avedon stand-in, Dick Avery. Working alongside his hard-charging editor, the wonderful Kay Thompson, Avery hatches a plan to create a new campaign for Quality Magazine, one that takes an average, bookish girl and makes her a fashion plate. They find Jo Stockton (Hepburn) in a musty bookshop in Greenwich Village, and despite her strict philosophical principles, she takes their gig as a means to an end. The photo shoot is going to take place in Paris, and once she is in Paris, she can meet her personal guru, Professor Emile Flostre (Michel Auclaire), the father of "Emphaticalism," a philosophy that essentially boils down to "put yourself in my place."

Once in Paris, the supposed ugly duckling turns into a gorgeous swan (or, as it's described in the film, the caterpillar's cocoon did not birth a butterfly, but a bird of paradise), and the black-clad philosopher becomes a stunning model. She is charmed by the romance of the city and by Avery. Crossed wires, though, lead to the usual romantic comedy complications, and a mad dash must be made to put them back together once they are torn apart. 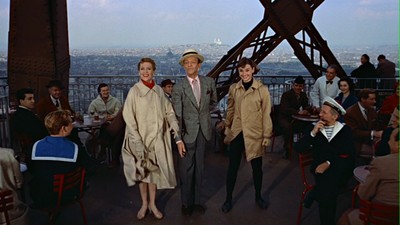 Sure, Funny Face possesses a bizarre anti-intellectualism in the way beauty is given greater value than brains, but that's part of the silly fantasy. There's a reason Kierkegaard has never been the subject of a musical, these things are supposed to be light and airy. Besides, it's pretty easy to see Funny Face for what it is when Astaire is such an old fuddy duddy. The portrayal of the bohemian café where dark personages gather to cry over tragic songs and question the meaning of existence is a little like how your grandfather probably talks about rap music. If you can't laugh at Fred Astaire impersonating a beatnik, then maybe you're as comically dour as the movie would have us believe beatnik's of your kind are. Plus, the same setting provides us with the iconic Audrey dance sequence, parodying Martha Graham, that the Gap so shamelessly appropriated for their vile ad campaign last year.

And those are only a sampling of the pleasures you'll find in Funny Face. There is the great music, the gorgeous clothes, and the truly inventive visual sequences Donen concocts for the magazine layouts at the beginning of the movie. In fact, for as much fun as Paris is, from a filmmaking standpoint, Funny Face is at its best in New York. The "Think Pink" number is a marvel of editing and design, and the outer office of Kay Thompson's executive suite is a beautiful concoction of minimalism and color.

And that wedding dress! I hate weddings, but even I love that dress.

So, yeah, the appeal of Funny Face is that it's a bit hokey, but fifty years is a long time, and it obviously is the good kind of hokey if we're still interested in the movie enough for there to have been a 50th Anniversary Edition DVD. With the list of talent involved--Astaire, Hepburn, Donen, Givenchy, Gershwin & Gershwin, etc.--could we expect any less? The joy of the movie, and its fundamental message to Jo, is that sometimes simplicity is okay. Sometimes we want to partake of something just because it looks nice or it makes us feel good. The fun and the predictability of a Cinderella story, which Funny Face very much is, is that it's fun and predictable. What good would it be if it weren't?

Video:
This new release of Funny Face is a bit of a surprise, coming on the heels of a very good 50th Anniversary disc released just barely over a year ago. The pause between the first two editions was eight years, but now between editions two and three, it's barely a blink. I once again refer folks to my review of the 50th Anniversary Edition, as it has screen captures between 1999 and 2007's discs, for those of you who have never updgraded and are wondering what to do. For all intents and purposes, I am hard-pressed to see a massive difference in this new 1.85:1 transfer, it is of the same essential quality. The colors are beautiful, the image free of scratches or dirt, and no real digital glitches to speak of. I will, however, try again to capture some of the same images as used in my prior review. 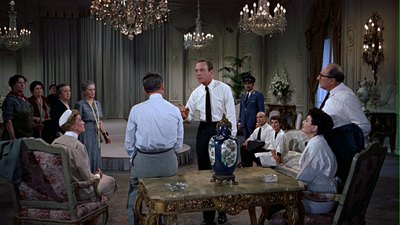 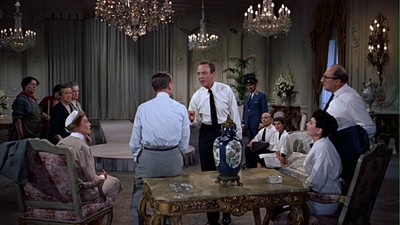 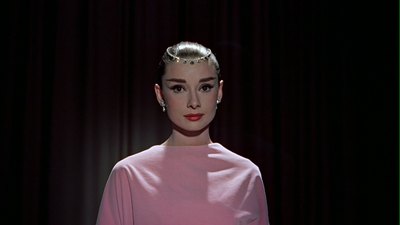 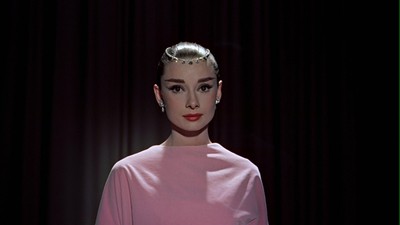 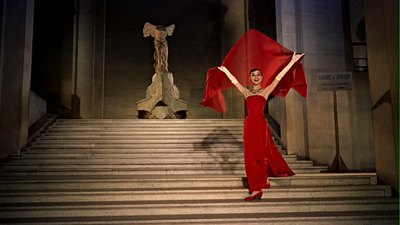 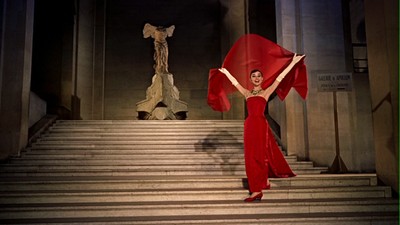 Note: These screengrabs were made on two different model computers, and more than a year apart, so exactness is a little tricky.

Sound:
The audio options this time out are virtually the same as the old disc, though the Portuguese dub is now absent. The original English, Spanish, and French mono soundtracks are all still intact, as is the 5.1 Surround mix. I don't hear any real differences in this new run of the movie, though I still slightly prefer the sound of the mono mix over the slight overkill of the 5.1. There are also subtitles in all three languages. 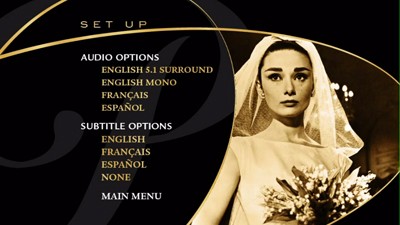 Extras:
As with previous entries in this Centennial Collection, Funny Face is a two-disc release, with no bonus features on disc 1 and a full supplemental program for DVD 2. All of the extras from the last edition are carried over, including the theatrical trailer and two short featurettes that together are a little over fifteen minutes. "The Fashion Designer and His Muse" looks at the relationship between Audrey and Hubert de Givenchy, while "Parisian Dreams" talks about the locations used in Funny Face and explains more about what Richard Avedon contributed to the production. A third program, the promotional reel "Paramount in the '50s" has not only been on all of the previous Centennial discs (Funny Face is #4, numbered on the spine), but I completely forgot that it has been on both prior editions of Funny Face, dating all the way back to 1999! Way to keep the hype alive, Paramount.

Thankfully, the three new extras exclusive to this disc are mostly pretty good. The only one I found to be a waste was "Fashion Photographers Exposed" (17 minutes, 52 seconds), a day in the life of a fashion crew taking photos inspired by Audrey Hepburn in Funny Face. In it, the photographers and designers talk about their work, Richard Avedon, and how fashion was portrayed in this film. It's not particularly insightful, and the photo session, I'm sorry to say, is fairly basic.

Much more interesting, though only tangetially related to Funny Face, is the 24-minute, 38-second "This is VistaVision" featurette. In it, historians and camera techs talk about the creation of the massive VistaVision process, which was the start of the 1.85:1 aspect ratio and done as a Paramount's attempt to combat the growing popularity of television. Clips from the Paramount movies from over the decade or so the process was used are shown (the first ever was White Christmas), and the film also looks at how Richard Edlund revived the process to use for multi-plane special effects while shooting Star Wars.

Even better, though, is the 26-minute, 30-second profile "Kay Thompson: Think Pink." The actress who played the magazine editor in Funny Face, as it turns out, was a remarkable woman. As a songwriter, she helped create the MGM sound; as an author, she dreamed up the beloved character Eloise; and as an older woman, she was an influential actress and fashion icon, spending her later years living with her goddaughter, Liza Minnelli. Interviewed from the documentary are biographer Sam Irvin; Jim Caruso, Liza's collaborator on a tribute show about Kay (there are also clips of Liza talking about her, and rare footage and photos of Thompson); Dick Williams, one of the Williams Brothers, who spent many years as a nightclub act with Thompson; Hilary Knight, the artist on the Eloise books; Matt Crowley, who finished the last Eloise book with Knight; and Ruta Lee, who played Thompson's assistant in Funny Face.

An expanded stills gallery is broken into three sections: Production, Movie, and Publicity.

The new Funny Face - Centennial Collection release is a two-disc package, released in a regular-sized plastic case with a disc tray on each side. The case has an outer slipcover, and there is also an insert booklet with liner notes and photos.

FINAL THOUGHTS:
An enduring musical, Funny Face is a visual delight, full of wonderful sights and sounds and an impeccable cast. Audrey Hepburn is lovely, Fred Astaire charming, and Kay Thompson a force of nature. Released for the third time as part of the new Centennial Collection, this new two-disc edition doesn't offer much by way of improved audio or visual (and truth be told, none was needed), but it does add a couple of solid extras that make it slightly better than the 2007 disc. If you're thinking of upgrading from that one, it's only necessary based on how much you care about the Kay Thompson and VistaVision programs; if you're still clinging to your 1999 discs, then what are you waiting for? Everyone should own Funny Face, if even just for the gorgeous fashion. But it's also a film I have watched over and over and never tired of, and so I have no problem ranking it among the Highly Recommended. 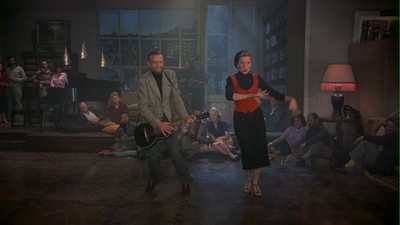