Taking of Power by Louis XIV - Criterion Collection, The 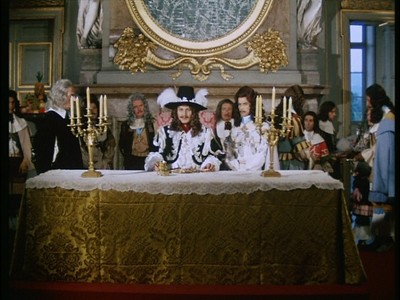 History is not always exciting. Apparently that is our lesson for today, boys and girls. In fact, it would seem that great power shifts can actually be boring. Tedious, even. With lots of standing around, enduring the rigmarole of courtly ceremony, saying what you mean without actually saying it or even by saying the opposite, and the occasional sniffing of a man's chamber pot to assess the state of his health. This is how monarchies shore up their strength and make the countries they rule great. This is how Louis XIV bolstered his power, and thus the way it happens in Robert Rossellini's 1966 anti-epic, The Taking of Power by Louis XIV.

Rossellini was one of the architects of Italian Neorealism, establishing a post-War aesthetic of telling stories about real people shot in authentic situations in an attempt to remove the artifice of cinematic tradition. Films like Paisan and Germany Year Zero earned Rossellini and the Italian film scene international acclaim, but like any such scenes, the aesthetic had to change. In the 1950s, Rossellini made some conventional pictures, as well as some emotionally wrought dramas. He also began to gravitate to historical and religious stories, such as his parable-laden The Flowers of St. Francis in 1950. The Taking of Power by Louis XIV came much later, and it was actually made for French television rather than the movie house, but it adheres to many of the tenets of Neorealism while also acting as a time machine, recreating a period long past.

The film is set in 1661, beginning on the eve of the death of Cardinal Mazarin (Silvagni), a foreign dignitary who had seized much power and wealth in France. With his passing, Louis XIV (Jean-Marie Patte) decides that it would best suit France for him to once more centralize the governance of the kingdom on a single throne. This he does despite many odds, including the doubting of his court, which sees him as merely a party boy who is easily bored. They expect him to quickly tire of government business, but before they know it, he has removed his rivals, changed fashion, and built the monumental Palace of Versailles. He also radically altered France's economy to bring prosperity to all classes, and the success of his extravagant reign would ultimately earn him the nickname "the Sun King."

In order to recreate the 17th century, Rossellini shoots in some of the historic locations, and he adorns his actors in the fashion of the times; however, in keeping with the strictures of Neorealism, he doesn't scrub and polish everything to the point of glamorizing it. There is a shabbiness to the clothes and the overloaded wigs that in some ways plays against the opulence of the setting while also underlining it. A detailed feast near the end of the film, where Louis dines on courses that number in the teens, eating alone while the entire court watches and a private orchestra plays dinner music, spares nothing on the details, down to the garnish on the pigling and the lock used to protect the King's pork on its journey from the kitchen to his table. As if matching this ambition, Rossellini prefers long, uninterrupted takes to cut up scenes full of insert shots. Imperfections, such as Louis bumping into a stool when visiting with his mother, don't halt the scene, but are integrated into it. As filmmaking, it's both exacting and of the moment.

It's also kind of dull. Louis XIV may have secured his rule through lots of backroom plans and quiet discussion, but it doesn't exactly make for scintillating cinema. It's not at all helped by the fact that Jean-Marie Patte doesn't really exude royal bearing or the charisma of power, not even once the King has it. Though Rossellini's shooting technique may be of the moment, Patte never appears to be in that moment. Rather, through most of The Taking of Power, he looks like he is just trying to remember his lines--thought, as it turns out, it was decided he would not see script until each day's shooting and was actually reading off a blackboard, hence his often distant look. A better actor might be able to rise to that challenge, harness such struggles, and make them appear as part of the King's thought processes, but Patte looks like he's about to go catatonic from the strain. You may want to go catatonic yourself while watching it.

Of course, Jean-Marie Patte shouldn't be forced to carry the blame himself. The history of The Taking of Power by Louis XIV appears to be stripped of its histrionics by design. The script by Philippe Erlanger and Jean Gruault actively avoids any overwrought drama, instead contentedly searching for it in regular palace life. Some of the choices they make are smart, including using chatter amongst the court to explain certain outmoded aspects of royal etiquette to the modern audience, but the overall effect is lacking. Perhaps I have been spoiled by watching too many The West Wing DVDs, but I expect my political walking and talking to be a little more snappy, not dispassionate and sedentary.

Perhaps it was Roberto Rossellini's desire to educate rather than entertain that leads to this downfall. It's all boiled vegetables and no seasoning, a dish we consume because it's good for us, because we're told we're supposed to, not because we want to. Ironically, this renders the great director's fascination with historical curiosity, after more than thirty years, to be little more than a historical curiosity itself. For me, I felt less like taking power and more like taking a nap. 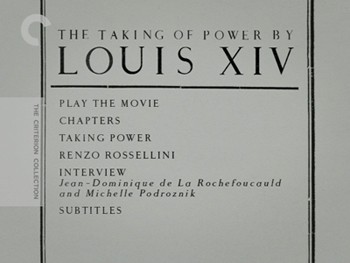 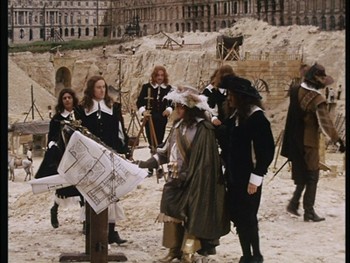 Video:
The full frame (1.33:1), color print of The Taking of Power by Louis XIV is a fairly decent transfer. The colors look good, and any fade or grain appears to be a product of the time rather than a fault of the DVD. The look of the image is pretty clean, with little by way of dirt or spots, though I did see a line running down different positions on the screen two or three times. All in all, it's a conscientious transfer and appears to make the best of what's available.

Sound:
The original French audio is given a monoaural mix that is fairly decent, with only a minor amount of background hiss. The tones are all clear with no real distortion.

Subtitles are in English. They are written in a straightforward style, easy to comprehend, and paced well for convenient reading.

Extras:
This Criterion disc comes in a clear plastic case with printing on both sides of the cover (the chapter listing for the movie is on the inside front cover). The 12-page interior booklet features photos, credits, an essay by critic Colin MacCabe, and an interesting explanation of the lettering style used on the DVD cover, menu, and in the booklet itself.

The multimedia essay Taking Power (24 minutes, 43 seconds) put together by Rossellini expert Tag Gallagher is both a mini commentary on the film and a summary of Rossellini's historical period. Using clips from this film and many others, as well as the occasional painting of real historical figures and photographs of Rossellini at work, Gallagher explains the director's intention with the movie and the overall thematic arc of these later films. He also explains how some of the distancing effect of Patte's acting was by design, and how Rossellini conversely used inventive camera technology to move in closer.

Interviews round out the rest of the extras. An exclusive five-minute, 2008 piece with Renzo Rossellini, son of Roberto and often his assistant or second-unit director, explains why Rossellini moved to television and the strange conditions of shooting The Taking of Power, and Renzo shares an anecdote about taking over the filming of the dining room scene. A second interview featurette, just over fourteen minutes in length, comes from 2004 and features artistic advisor Jean-Dominque de La Rochefoucauld and script supervisor Michelle Podroznik. They explain some of the origins of the project, Rossellini's working methods, special effects, and how and why the film differs some from history. They also cover some of the same ground as the younger Rossellini in terms of the elder's view of television as a tool. One must wonder what Roberto Rossellini would think of the many new delivery systems available today in terms of reaching people and using film to educate.

Those interested in this aspect of Rossellini's career should also look for the simultaneous release from Criterion's Eclipse line, Rossellini's History Films: Renaissance and Enlightenment.

FINAL THOUGHTS:
I know that Roberto Rossellini is a master film director, but everyone has a bad day and The Taking of Power by Louis XIV left me cold. A staid recreation of the events that lead to the Sun King of France establishing a greater presence of the French monarchy and building the Palace of Versailles in the 17th century is a little too textbook mixed with a little too much dinner theatre. Jean-Marie Patte as Louis is particularly unconvincing, and the whole thing drags. The Criterion Collection has put together a solid package, but based on the material, I say Rent It. 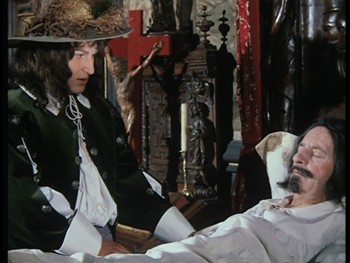 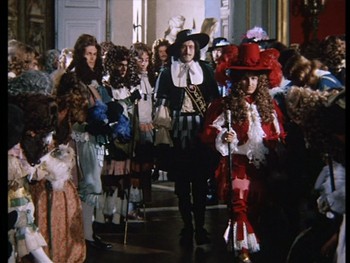