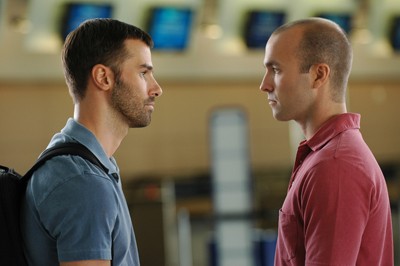 When Jeff (Adam Neal Smith) is taking care of his friend Mark's affairs following a fatal car accident, he discovers e-mails from an Italian man named Andrea (Allesandro Calza) regarding a romantic trip to Dallas he is planning to make to see Mark. Jeff informs Andrea of Mark's passing, but eventually tells him to come visit anyway. Unaware of this online relationship, Jeff is presumably curious to meet the guy that captured his best buddy's heart from all the way around the world. Over the course of the weekend, the two men bond over their grief and the separate memories of the person they shared, forming a stronger connection than either could ever have imagined.

Directed by Yen Tan (Happy Birthday), Ciao is an unpretentious, quietly emotional feature film that sets out to explore the way individuals care for one another and how loss can make our personal connections all the more acute. Co-written by Tan and Calza, Ciao is driven alternately by dialogue and silences, but rarely by events. The weekend it covers is not about doing things, but about two men being together and sharing the absence of the one that is gone.

There is not much more to Ciao than that. There isn't a lot to dissect. The handful of supporting characters only ever appears briefly, including short glimpses of Mark (Chuck Blaum), and the entire picture passes between Jeff and Andrea. Both Smith and Calza are good in the roles, though not outstanding, their lack of polish as professional film actors serving double duty to also be the discomfort of two strangers meeting for the first time. The writing gradually eases them toward their friendship, amusingly pleasant small talk eventually giving way to deeper revelations while still thankfully eschewing showy dramatics. There is a casual air to Ciao, from the minimal music by Stephan Altman to the almost sterile photography of Michael Victor Roy. It's both unfussy and clinical at the same time.

The only nagging problem with the script for Ciao is that, like the acting, it's hard to tell how much of it is merely skating the surface by design or if the writing simply isn't very deep. Either way, it doesn't really matter, as it mostly works. Ciao charms slowly, and as Jeff and Andrea grow accustomed to each other, so too does the viewer grow accustomed to them. The arc of their relationship grows naturally, with the only misstep coming at the very end of the film. As the trailer and the production stills reveal rather openly, the two new friends end up sharing a bed together, a development that is so predictable, it ends up coming off as merely inevitable rather than cathartic. I can't help but think it would have been better had Yen Tan defied expectation here and had his characters keep a safe distance.

Still, it's not enough to completely ruin Ciao. This softly paced, unadorned film is more about characters and emotions than plot machinations, and so the fact that it's plot machinations that ends up being the movie's Achilles heel is forgivable. In some ways, too, it's similar to the lesson of the movie's story, that how you end up feeling is more important than the imperfection of the path that leads you there.