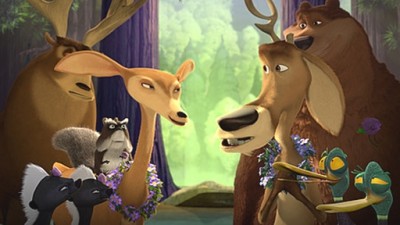 Perhaps it's damning with faint praise to suggest "Open Season 2" is a more competent film than its 2006 predecessor, but in a very appealing way this sequel gets the job done with minimal fuss and a few sizable laughs. Even though it's cursed with a small budget and a complete overhaul of the voice cast, "Season 2" is a gentle charmer, yet even more importantly, it's practically "A Night at the Opera" compared to the first film.

Preparing for his wedding to love Giselle (voiced by Jane Krakowski), Elliot (Joel McHale, TV's "The Soup") is starting to have his doubts, confiding to his best friend Boog (Mike Epps) that he feels inadequate. Heading toward a matrimonial disaster, the gang is distracted by the absence of pooch Mr. Weenie (Cody Cameron), who's been reclaimed by his human owners, whisked away to a retreat for domestic animals. On the trail to retrieve their friend, Elliot tries to figure out exactly what his heart desires, while Boog, Giselle, and raging squirrel McSquizzy (Billy Connolly) feel the wrath of Fifi (Crispin Glover), a vengeful poodle who loathes all wild animals.

It's easy to notice that "Open Season 2" was not afforded the same opportunity to marinate in money and prolonged production time as the original film. Visually resembling a PS3 video game cut scene, the CG effort goes about as far as it can with limited resources. This doesn't mean the picture is unsightly, it's just not allowed the same keystroke polish as the 2006 movie, making character movements stiff, backgrounds moderately static, and animated scope an impossibility. Being the clever directors they appear to be, Matthew O'Callaghan and Todd Wilderman find inspired ways to work around the absence of luxury, picking their fights carefully to make the best feature humanly possible.

One of the largest detours from the previous film is found in the voice cast. Gone are Ashton Kutcher and Martin Lawrence as Elliot and Boog, and I say good riddance. Replaced by McHale and Epps, the new blood infuses "Season 2" with a bighearted comedic spirit; the cast moves beyond mere mimicry to find diverse angels of neuroses and panic to devour. McHale especially impresses with his full-throated slapstick skills, finding his own silly beats as Elliot that end up more comedically rewarding than Kutcher's lackluster take on the character. Also welcome is Glover, perhaps the most unexpected animated voice actor in recent memory, giving his pampered pooch character a nice edge of hostility as the improbable villain of the movie.

Another advantage "Season 2" holds triumphantly over its leaden forefather is its brevity. Clocking in at 70 minutes and built for lenient DTV audiences, the film is free to chase cartoon tangents without the demand to lay a bulky morale on the whole endeavor. Of course, this means more mindless screaming from the characters to tickle children, which can be quite unpleasant to any viewer over 10 years of age, and I wasn't too interested in the film's flirtation with fecal humor. However, these are the unfortunate taxes to pay on what becomes a solid comic venture in the second half, as the gang infiltrates the Pet Paradiso animal theme park, thus creating multiple opportunities for comic mischief, a chance to try on some delightfully absurd animal disguises, and entertain a few pokes at Boog's weight sensitivity.

Presented in anamorphic widescreen (1.78:1 aspect ratio), "Open Season 2" runs blindingly hot in the visual department, with the animation presented in big bold colors that hold their hue to satisfaction. Black levels are also firm. Granted, the film doesn't appear nearly as fluid as its predecessor, but the image quality is kind to the agreeable sequel.

The 5.1 Dolby Digital mix maintains the frantic nature of the film quite well, with cartoon bells and whistles pleasingly staged around the track, leaving dialogue confident throughout the film. Spanish and French 5.1 tracks are also available.

"The Game Zone" takes the DVD participant to a series of challenges, listed as "Boog's Water Slide Maze Craze," "Elliot's Go Fetch," "Track That Treat," "Doggie Strength Test," and "Fix That 'Do!" The games are quick and ideal for younger viewers.

"Going Wild with the Voice Cast" (14:46) interviews cast and crew on their experiences breathing life into the animated characters. McHale is the unofficial host of the featurette, working up a pleasing wacky sweat to make the promotional tool interesting. Footage of Glover in the recording booth is offered, but the actor disappointingly refuses an interview.

"How to Draw Boog, Elliot, and Fifi" (18:11) sits down with storyboard artist Sean Mullen as he walks the viewer through simple animation maneuvers.

"'Who Let the Dogs Out?' Music Video" (3:34) is only a montage of scenes scored to the once mightily ubiquitous hit from Baha Men. I have no clue why this thing is here.

A Trailer has not been provided on this DVD.

"Open Season 2" is the type of diversion Hollywood churns out to give primary caretakers across the nation a chance to take a bath while kids get lost in a brightly colored fantasy world of wisecracking animals and waterslide chases. Accept it on a lowered scale of intention, and there's actual ingenuity here to embrace, not to mention starting the great Joel McHale on a cartoon career he was born to conquer.