Edition Filmmuseum // Unrated // January 16, 2009 // Region 0 // PAL
List Price: €29.95 [Buy now and save at Amazon]
Review by Chris Neilson | posted January 23, 2009 | E-mail the Author
Told through interviews with film historians and people who knew her, Hedy Lamarr: Secrets of a Hollywood Star (2006) offers a workmanlike biography of the rise and fall of a leading lady of Hollywood's Golden Age. 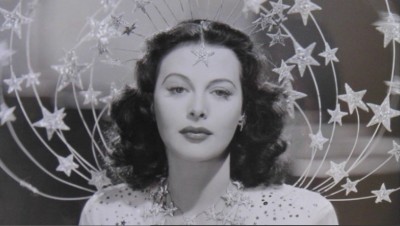 Born Hedwig Kiesler in Vienna, Austria on November 9, 1914, she achieved international notoriety for appearing nude and simulating an orgasm in the Austrian-Czech production Ekstase (Ecstasy, 1933), following which she married the first of her six husbands, Fritz Mandl, a prominent Austro-fascist arms dealer.

With the collapse of her first marriage, Kiesler signed a contract with MGM, changed her name to Hedy Lemarr, and immigrated to Hollywood. Beginning with Algiers in 1938, she made a dozen films for MGM working opposite the likes of James Stewart, Spencer Tracy and William Powell. However, Lemarr developed a reputation for not wanting to work, turning down leads in Gaslight, Casablanca, and other films that would have solidified her place at the forefront of Hollywood's leading ladies.

Let go from MGM in 1944, Lamarr worked independently on a number of films, a couple of which she also bankrolled. Though she continued to make movies until 1958, the apex of her post-MGM career was Cecil B. DeMille's 1949 epic Samson and Delilah opposite Victor Mature. Financial problems, shoplifting charges, and treatment for nervous exhaustion finally ended her declining career, and she moved to New York City, and later to Florida where she died on January 19, 2000.

Filmmakers Donatello & Fosco Dubini, and Barbara Obermaier construct their workmanlike 85-minute biography from new interviews and from an extended German-language interview conducted with Ms. Lemarr in 1970. The picture that emerges is of a woman that was bright but deeply troubled, who left a wake of failed marriages and estranged children behind, and died a recluse.

Presentation
This 2-disc set was released by Edition Filmmuseum, a label founded by six German-language national archives and the Goethe-Institut.

Audio:
The 2.0 DD audio sounds fine with no dropouts or distortions. The mixed German and English dialogue is always crisp and clear. Optional English and German subtitles are offered.

Extras:
As with most all releases from Edition Filmmuseum, Hedy Lamarr: Secrets of a Hollywood Star is packed with extras across two discs. Along with the feature film, disc one includes an additional 13-minute interview with Hollywood hairdresser Eric Root about Hedy Lemarr; various documents, photos and filmography of Lamarr; and trailers for this and two other documentaries from Donatello & Fosco Dubini: Jean Seberg: American Actress (1995) and Thomas Pynchon: A Journey Into the Mind of P. (2001).

Outshining the main feature itself is the complete 79-minute cut of Ekstase (Ecstasy, 1933) provided on disc two. A landmark film for its nudity and simulated orgasm, it's the tale of a newlywed who has an adulterous romance culminating in the suicide of her estranged, impotent husband and herself. The image looks to be recently restored and is presented in its original aspect ratio of 1.14:1 with removable English subtitles. Disc two also includes a gallery of 34 stills and two essays about Ekstase.

Final Thoughts:
Hedy Lamarr: Secrets of a Hollywood Star is a workmanlike, conventional biography of a rather sad life. Though the filmmakers only haphazardly cover a portion of Lamarr's failed relationships with husbands and children, money woes and professional decline, fans of Hedy Lamarr specifically or of Golden Age Hollywood generally, will probably find some value in the main feature, while an even larger audience of cinephiles will be interested in the inclusion of the restored landmark, Ekstase which really should have gotten top billing on this release.