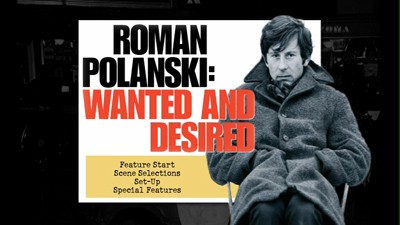 The case of Roman Polanski has been one of the most notorious and hotly debated scandals since 1977, when the immigrant director was charged with various crimes surrounding his sexual relations with a thirteen-year-old girl. The resulting trial, the media frenzy around it, and Polanski's eventual flight from the U.S. have been the subject of much scrutiny and speculation, but never with such incisive and revealing detail as director Marina Zenovich's recent documentary Roman Polanski: Wanted and Desired.

The title of the film comes from a summation of Polanski's double-sided life. On one side, he is a fugitive from justice wanted for a crime that is now more than three decades old; on the other side, he is a desired filmmaker and even a venerated scholar in France, which he has called home since leaving the States. It is a dichotomy that could be said to have existed throughout Polanski's life, from his survival as a child who lost his parents to the Holocaust through his early public image as the charismatic director of dark and disturbing films like Rosemary's Baby and Repulsion.

Some may initially blanche at the idea of a film like Wanted and Desired, thinking that it will attempt to exonerate Polanski for his crimes. Zenovich does no such thing, and for the most part, she avoids even getting too deep into the more lascivious details of the situation. Instead, Wanted and Desired is a study of what happened after, of the strange journey the case made through the Los Angeles court system. Talking to Polanski's lawyers, the investigating police officers, reporters who covered the trial, and even the victim in the crime, Zenovich uncovers a twisted tale full of double-crossings, questionable motives, and possibly a total miscarriage of justice by a media-hungry judge. The judge, Laurence J. Rittenband, passed away quite some time ago, and he and Polanski are the only two participants not to take part in the documentary--which, given how they represent the extreme interpretations of this situation, may be fitting.

Zenovich constructs her film using new interviews, archival clips (including some excellent unedited footage from news crews at the courthouse), and a variety of selections from Polanski's films and interviews with the man from both before and after the trial. Groundwork is even laid for the contentious relationship the filmmaker already had with the press, which began with the shocking accusations many newspapers made against Polanski before it was known that his slain wife, Sharon Tate, had fallen victim to the Manson Family; likewise, another strong case is made for the attention-seeking tendencies of Judge Rittenband. Zenovich doesn't employ any narrative voiceover, instead letting all the participants speak for themselves and using text to fill in the gaps to transition from one point in the narrative to another.

There is some dark irony in the fact that Polanski's life became as knotted and unfathomable as one of his own thrillers. He describes the legal ordeal as a year of torture in which he was subject to the caprice of the one man who was supposed to be fair and impartial. Both Polanski's lawyer and the prosecutor in the trial back this up, confirming the backroom deals and the eventual broken promises that drew the proceedings out and kept Polanski's fate from ever being definitively decided. By the end, though Zenovich makes no appeal to have Polanski cleared to return to the U.S. without fear of further prosecution, it is hard not to think that the director's exile is not as cut and dried nor as impossible to resolve as it once seemed. Though recent moves to settle this matter in court have seemingly run aground once again, perhaps Roman Polanski: Wanted and Desired will at least give the artist a chance to have a new verdict rendered in the court of public opinion. 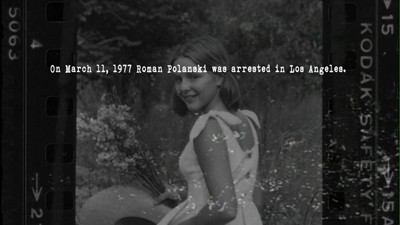 Video:
This recent production, originally broadcast on HBO but also shown in theatres, is brought to DVD at a 1.78:1 aspect ratio, enhanced for 16:9 TVs. It looks as good as one would expect from a 2008 documentary, with, of course, the picture quality depending on the various source materials some footage is drawn from. Even the old news footage appears to have been given a decent cleaning, and the new interviews look excellent. I did see some slight evidence of digital combing, largely in some of the older video footage, but this was by no means a persistent issue.

Sound:
There are two English language soundtracks, a 5.1 mix and a 2.0 option, both in Dolby Digital. Honestly, this is not a movie that really demands a 5.1 mix, so either option should be just fine. There is some nice use of music in the movie that underscores the talking heads, but that's about as complicated as the audio gets.

There are optional English subtitles for the deaf and hearing impaired, as well as Spanish subtitles. 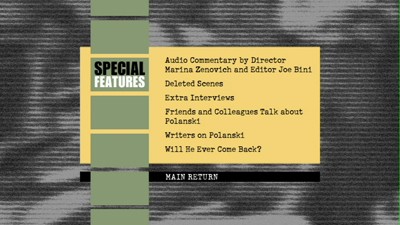 Extras:
The extensive supplemental features are lead by a full-length audio commentary by director Marina Zenovich and editor Joe Bini. The pair discusses in detail how they arrived at the approach they took in putting all of the disparate elements together, what pieces to leave in and what to leave out, how some of those elements were acquired, and how they strived to maintain an impartial perspective.

There are five inconsequential deleted scenes, all of them somewhere between one and two minutes, and at least one--a reporter featured in the movie introducing himself--having no discernible reason for being unearthed. Two scenes show Roger Gunson, the district attorney who lead the case against Polanski, revisiting the Santa Monica courthouse where the trial was held, and one scene also introduces us to Gunson's replacement in maintaining the Polanski file. The final scene is an alternate version of the explanation of the director's induction into France's Académie des Beaux-Arts.

A collection of extra interviews also presents short clips (one to five minutes), and these feature twelve different lawyers and experts from the Los Angeles legal system (including one courtroom observer and one reporter), from both during the period of Polanksi's trial and after, discussing the past and possible future of this case, and also going deeper into the character of Judge Rittenband. This also includes Georges Klejman, Polanski's French attorney, whom some may find distasteful in his recharacterization of events. These are all decent, though they don't really illuminate anything further than what we've seen in the main feature.

"Friends and Colleagues Talk About Polanski" continues this style of short clips with twenty-one different people talking about the director. This includes assistants, bosses, and collaborators, as well as famous people like Mia Farrow, Robert Evans, Nastassja Kinski, and Robert Towne. (Some of these commentators, such as Farrow and producer Hawk Koch, are also in the main feature.) These folks share a few anecdotes and give their impressions of Polanski as a man and as an artist. Likewise, "Writers on Polanski" features video interviews with F.X. Feeney, David Thompson, and Joan Dupont sharing their analysis of the character and creator. Thompson delivers the one summation that is less than glowing, though still far from a character assassination. (Note: Some of these clips show interlacing not evident in the main feature.)

"Will He Ever Come Back?" (7 minutes, 41 seconds) is a short collection of many of the same interview subjects answering the title question.

FINAL THOUGHTS:
Highly Recommended. Regardless of what you think you know about Roman Polanski or the 1977 sex scandal he became embroiled in, Marina Zenovich's Roman Polanski: Wanted and Desired is essential viewing. The documentary reopens the case to look at what actually went on in the courtroom, including the behind-closed-doors plotting of an opportunistic judge, whose various schemes and reversals ultimately provoked Polanski's fleeing the U.S. Zenovich builds a compelling narrative, constructing the film with archival clips and new interviews, shedding light on our fame-hungry culture through this perversion of the judicial process. It may change your mind about Polanski's predicament, it may not, but it will at least cause you to look at it in a new way. 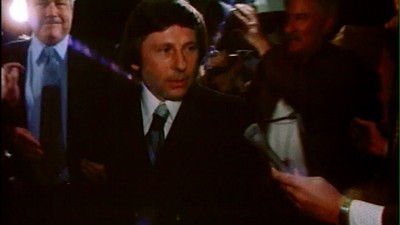