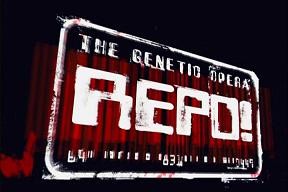 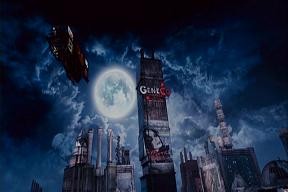 Repo! The Genetic Opera has been a movie on my must-see list for several months. There have been several glowingly positive reviews - and a few glaringly negative reviews as well - posted on the Internet for this unusual musical from the director of several entries in the Saw franchise, Darren Lynn Bousman. Many seem to feel that this film has "cult classic" written all over it, which, of course, is enough to whet the appetites of genre mavens like me. Thus, it was really kind of DVD Talk to send me Lionsgate's home video release of this odd hard rock horror concoction for review.

And I'm glad to report that Repo! The Genetic Opera lives up to its hype. This is not a movie for conventional or timid moviegoers, but it definitely delivers a rather unique cinematic experience. I enjoyed it - despite its faults.

Repo! The Genetic Opera has a disparate cast who, for the most part, carry off their singing roles quite well (the entire film is a montage of songs). Headlining this production are Alexa Vega, grown up a bit from her Spy Kids days, and Anthony Steward Head, the always dependable genre veteran most remembered for his run on Buffy the Vampire Slayer and appearances in Doctor Who television and audio. Vega plays Shilo, a sickly 17-year-old whose father (Head) moonlights as a medical repo man when he isn't caring for her. This is the near future, and the world of the movie is a decaying urban nightmare where Geneco, a biotech company specializing in organ replacement, seems to control everything. People mortgage their lives for new organs, and when they can't pay, well, that's where the repo men come in.

Rounding out the cast are Paul Sorvino (no stranger to unusual musicals given his appearance in Baz Luhrmann's kinetic take on Shakespeare in Romeo + Juliet) as the misogynistic owner of Geneco, socialite Paris Hilton(!) as his strung out daughter, and, of all people, Sarah Brightman as Blind Mag, a singer with Riddick-style altered eyes that can project holograms. These characters' connections to one another and back stories are rather elaborate, and the film creatively cuts to comic book paneled flashbacks to fill the audience in. Unfortunately, these flashbacks reveal a key visual flaw in Lionsgate's presentation, but more on that in the Video portion of the review.

While the visuals are inventive, the main attraction of the movie, of course, is the music. This was the aspect of the film that I was most dubious about going in. But, for the most part, it rocks! Several songs I would consider as memorable, especially a duet between Shilo and her father during the requisite operatic tragic end. Head, Vega, and Sorvino all deliver their material convincingly and emotionally. Some of their support varies in quality, with Hilton probably the weakest of the bunch - although her character in many ways parodies her real-life celebrity persona, so this isn't necessarily a drawback.

I can easily see Repo! The Genetic Opera not appealing to many moviegoers. It strives very hard at being strange, and a fair amount of blood and gore is splashed about. However, horror film and rock fans should find a lot to like about this unconventional treat. Highly recommended. 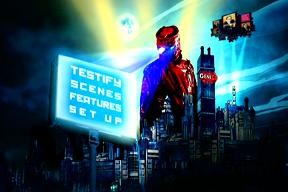 I did a little research on Repo! The Genetic Opera before writing this review, as something seemed off when I watched the movie. Occasionally, dialogue boxes were truncated during comic book panel sequences, which made me wonder whether Lionsgate was presenting the film in its correct aspect ratio, or if director Bousman was just making another unusual artistic choice. Unfortunately, the former was the case. The anamorphic 1.78:1 image on this DVD is indeed a slightly modified version of the original aspect ratio, 1.85:1. This isn't pan and scan bad, of course, but one wonders why Lionsgate went down this route when it's clear to the viewer that something is amiss. Oh well. Otherwise, Repo! The Genetic Opera looks quite good. The colors are well-rendered, and though the image is soft, it's clearly done so for artistic reasons.

The sole audio track is a rocking Dolby Digital 5.1 affair. The songs and music come across quite well, with the vocals always predominant over the score. Fans of the movie should be satisfied. Optional English and Spanish subtitles are also available. 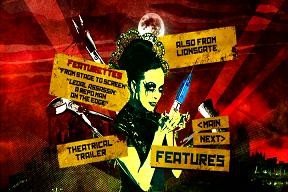 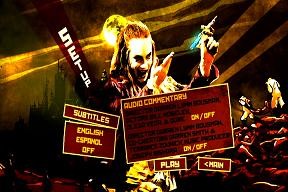 Several horror and rock - themed trailers precede the main menu: The Haunting in Connecticut, Saw V, Saw IV, The Doors, and Prey for Rock & Roll. These trailers are accessible collectively in the menu system under an Also from Lionsgate link. A separate link provides the theatrical trailer for Repo! The Genetic Opera.

Two featurettes are also available. From Stage to Screen (10:52) and Legal Assassin: A Repo Man on the Edge (3:53) are fairly typical featurette material. Cast and crew make soundbyte comments about the movie that are edited together with shots from the film itself. At least they're in anamorphic widescreen.

More significant extras are two feature-length commentary tracks. Rather than appearing in the Features menu, these tracks are made accessible in the Set Up menu for some reason. The first audio commentary has director Darren Lynn Bousman with actors Bill Moseley, Alexa Vega, and Ogre. The second commentary track returns Bousman, this time with co-creators Darren Smith and Terrance Zdunich, and music producer Joseph Bishara. A random sampling suggests both tracks are casual and informative.

It's a shame that the aspect ratio on this DVD is incorrect, but that's not enough for me to stunt my recommendation for Repo! The Genetic Opera. Director Darren Lynn Bousman helms this unusual, futuristic horror rock opus with manic glee. The results are uneven but always intriguing. Highly recommended for moviegoers looking for something truly different.