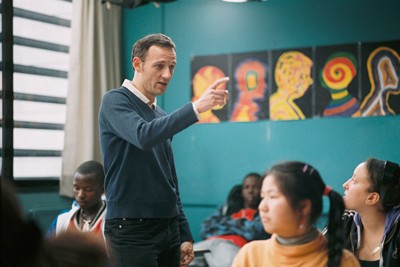 The new French film The Class (Entre les murs) is kind of a curious beast. Anyone catching it cold might be forgiven for thinking it is a documentary, as the film's director, Laurent Cantet, unmoors his camera and shoots with an intimate, loose style more befitting a fly-on-the-wall nonfiction movie than your standard fictionalized entry in the inspiring-teachers-poor-students genre. Then again, The Class was likely undertaken as an antidote to those kinds of feel-good movies, kicking any contrived inspirational message to the curb to show us the real struggles and frustrations of teachers and students. Though the line between fact and fantasy isn't totally erased, it is intentionally blurred.

Adding to this dismantling of the fourth wall is the fact that the movie is based on a novel by Francois Begaudeau that he wrote after working as a French teacher in a junior high geared toward helping troubled children from poor neighborhoods, many of them from immigrant families. In the movie, Begaudeau plays himself, and he and Cantet went to an actual public school like the one in the book and cast teenagers to play themselves. Through workshops and improvisations, they created a script in collaboration with the adolescent actors that presumably allowed them to channel some of their own experiences into the narrative.

The Class tracks Monsieur Begaudeau's class over the course of a single school year, September to June. As a veteran of this particular campus, he thinks he's started to work out how the system functions and even knows some of the kids, having taught them the previous year. Much has changed over the summer, though, and the kids have gotten bigger and more defiant, and even a girl who he thought he had a rapport with is starting to question his teaching methods. Though possessed of an admirable patience, Begaudeau spends most of his sessions trying to keep the kids focused and under control, enduring taunts and open challenges with a relatively good, albeit rough, humor. He's not a histrionically heroic teacher, no jumping up on desks or sloganeering here, but he does have the best interests of the students at heart. They often question why they must learn all the language rules he is trying to teach them, and from his point of view, it's so they can best express themselves to the world. This is most plainly revealed in the ongoing assignment where each teen must write his or her own self-portrait, a piece Begaudeau is constantly encouraging them to refine in order to uncover more about who they are. 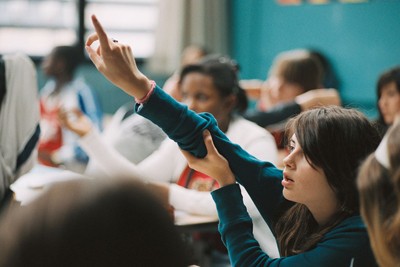 Various members of the class reveal themselves to be good, motivated students, while others act out in increasingly defiant ways. Most of them are indifferent, however, and it's these that Begaudeau probably loses the most by constantly focusing on the troublemakers and the class clowns. You will spend most of The Class being completely frustrated, not just with the teenagers and their antics, but also from the teacher's inability to tamp down their adolescent acting up. For as good-hearted as Begaudeau can be, he seems to have set a boundary in how far he will allow his empathy to extend. Though constantly encouraging his fellow teachers to use rules as guidelines and not absolutes, even he expresses that there are limits to behavior he will tolerate. A more hard-edged teacher accuses him of being too committed to being arbitrary in how he evaluates his charges, and this seems to be our man's Achilles Heel. Once his students have reached that limit, he hasn't yet figured out how to allow them back into his good graces.

It's an interesting tactic, as most films of this kind are too scared to admit that teachers are humans, too. There are multiple instances where if Begaudeau stopped explaining his point of view long enough to listen to what one of the kids is saying, he could avert bigger problems. A girl he butts heads with tries to tell him why she feels just as disrespected by him as he does from her, and he lets her withdraw rather than meeting her halfway. Likewise, he never seems to hear the teens when they tell him why his curriculum is outdated and doesn't reflect their lives or needs. This turns into a fatal error during an unfortunate incident when his frustration with an out-of-control classroom prompts an outburst where he likens two female students to "skanks." As a language teacher, he gets hung up on what he perceives as the literal meaning of his statement rather than being open to what the vocabulary means to the girls. The heated exchange also prompts one boy whom Begaudeau had previously made progress with to get violent. In the aftermath, a mea culpa would work wonders, but the administrative reflex is to circle the wagons and only admit to the bare minimum of wrongdoing.

This alternative, unexpected route makes for a fascinating, compelling film, one that notes the uphill battle educators face without trying to put too much polish on a situation that is inherently tarnished. Though the final scenes give Begaudeau some validation, as the final day of class is spent encouraging the students to share with everyone what they feel they've learned over the year, Cantet also wants us to realize that no one is ever 100% effective. There is, for instance, the girl Esmeralda, one of the "skanks," who informs Begaudeau that he taught her nothing and that his choice of reading material was useless, but who then paradoxically admits to having learned the most from reading Plato on her own. More surprising, though, is the student who privately admits that she really did learn nothing and, in a moment of adolescent existentialism, ponders what it's all for. Begaudeau's stuttering replies seem to dismantle the cliché that if a teacher reaches one young mind, then her or she is successful, instead revealing that it's the one that gets away that will keep any educator up at night.

It's in this that Laurent Cantet's art-imitating-life approach pays off. Had he chosen a more conventional dramatic style, then The Class' downbeat complexity would be as much of a cheat as an upbeat the-kids-learn-from-the-teacher, the-teacher-learns-from-the-kids crowd pleaser. The illusion of reality lends the final scenes a credibility, not just that we have arrived at this point naturally, but almost like it happened accidentally, the way things actually happen in the real world. I left the theatre with a strange mix of admiration and aggravation, glad that there are people like Francois Begaudeau out there trying to make a difference but mad that it appears to be so hard to do so.