Being There: Deluxe Edition 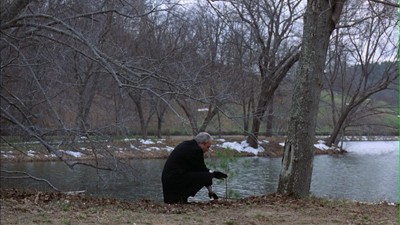 The role of Chance the Gardener in Being There (1979) was one of Peter Sellers' last, as well as the one he struggled the longest to realize. The chameleonic comedian had the rights to Jerzy Kosinski's novel for nearly a decade before cameras rolled under the direction of the great Hal Ashby (Harold and Maude). Working from a script by Kosinski himself, Sellers' performance left an indelible mark on cinema, providing him with a chance to marry his funnyman skills to material that had real heart.

Chance is an aging manchild who has spent his entire life inside one house, working for its rich owner. He has never learned to read or write, and in fact has never ridden in a car or even gone beyond the property's outer walls. Everything he knows he has learned from television, which Chance watches--and mimics--constantly. If he sees the President of the United States (Jack Warden) on the tube shaking hands, Chance practices shaking hands just like him.

At the start of Being There, Chance's benefactor has passed away, and the lawyers in charge of the estate, not knowing who this strange gardener is, send Chance on his way. Though up until this point we have been lead to believe that Chance is on some spatial southern estate, as soon as he steps through the door, greeted by strains of a 1970s funkified "Also Sprach Zarathustra," we realize that this little house is buried in the heart of urban Washington D.C. Not knowing any better, Chance starts walking, his television remote in hand, in search of new adventures. Or, at the very least, some lunch.

A chance encounter with a limousine--yes, he's named Chance for a reason; many of the names here have outside meanings--leads Chance into the care of the Rands. Benjamin Rand, played by veteran actor Melvyn C. Douglas and perhaps named for Ayn Rand, is a rich capitalist on his death bed, and he and his young wife, Eve (Shirley MacLaine), adopt Chance, mishearing his introduction as Chauncey Gardener and believing him to be a zen master filled with all kinds of soothing wisdom. The newly dubbed Chauncey actually says very little, often just repeating what the last person said, nodding in agreement, or sharing gardening tips, but his calm demeanor mellows the room, inviting people to listen perhaps more intently than they would otherwise. Chauncey becomes all things to all people, allowing them to replace what he doesn't say with exactly what they want to hear. This gardener soon has the ear of the President, shares his advice on television, and attracts the attention of that temptress Eve (oh, those names!), all the while oblivious to the effect he is having or what is really going on. 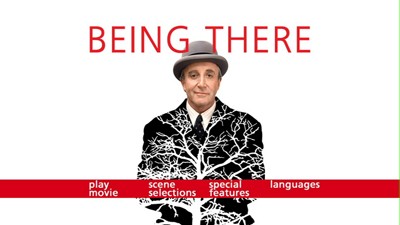 Ashby and Sellers create a wonderful, magical comedy with Being There. Its bittersweet tone fits well with the gentle satire, and neither the writing nor the staging ever pushes anything too hard. Part of the charm is the simplicity, the lack of fuss. Like Chance himself, Being There is charming for how unassuming it is, and in that sense, it allows us to find the meaning in what passes in front of us in much the same way the people this humble gardener encounters find meaning in his down-home declarations.

Which isn't to suggest that there is no greater meaning here, because there is plenty that one can walk away with after watching Being There. Kosinski is carefully laying out a little parable to prod the audience into thinking more about the complicated nature of modern culture and reassess our humanity, and the magical effect is elevated further by Ashby's apparently spur-of-the-moment ending (and nearly ruined by the legendary bad decision by the studio to put Peter Sellers outtakes over the closing credits, spoiling the feeling Ashby intended to leave you with). Quite often, Being There is also laugh-out-loud funny. Sellers, unsurprisingly, loses himself in the character, exercising incredible restraint and saving the broad comedy for only the right moments. The result is simply wonderful, and Sellers deserved the Oscar nomination that came his way. (Melvyn Douglas actually took the statue home for best supporting actor in Being There.)

Effectively, Chance's purpose in life is to bring people together and to nurture their souls with his delicate care. Like plants, people don't require a heavy hand, they require a soft touch. He sets the dying rich man at ease, shows the lonely wife she can love again (even self-love!), and reminds movie fans that good old-fashioned optimism still has some sway in a cynical world. The famous tagline for the movie (and indeed, the one on the front cover of this DVD) is that "Life is a state of mind," though the real message is, wherever you may find yourself within that state, just being there is enough to keep it all going. 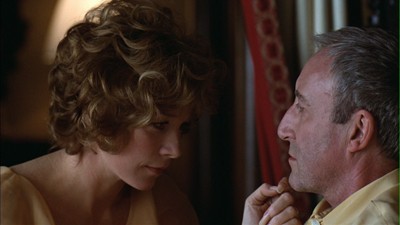 Video:
This new Deluxe Edition of Being There boasts an anamorphic transfer "newly remastered from original elements." It looks quite good, free of scratches or dirt as well as any digital noise. The tones look natural and preserve the look of the 1970s film stock while also maintaining the 1.85:1 aspect ratio. If I had any complaint, it's that the blacks can look a little hazy. Look, in particular, at the scenes where Chance and Eve first drive through the gates of the Rand home in the dead of night, and you'll see what I mean.

Reading DVD Talk's assessment of the original 1999 release of Being There, I would surmise that this is an improvement over the older edition, particularly in terms of what the previous reviewer perceived as color errors. The issue of faded flesh tones that he mentioned has been cleared up in full.

Sound:
The original English soundtrack is mixed in Dolby mono, which likely maintains the balance of the vintage audio mix. The sound is extremely clear and sharp without any external noise or distortion. French and Spanish mono tracks are also available, as well as subtitles for each of the featured languages. This includes a second English subtitle track geared toward the deaf and hearing impaired. (Note: The 1999 release had Portuguese subtitles that appear to have been left off this edition.)

Extras:
For a Deluxe Edition, this release of Being There sure doesn't feel very deluxe. In addition to the theatrical trailer, Warners has included a short documentary--meaning we have gotten a total of one extra feature on this allegedly deluxe release. Then again, we've all known for some time that the names they give each dip into the well are fairly arbitrary, haven't we? Words like "special" or "collector's" or "limited" are just new ways to say "Buy it again." How about the "We Didn't Get it Right the First Time Edition"?

The "Memories of Being There" featurette is just under 15 minutes long. It consists entirely of clips and an interview with Ileana Douglas, the granddaughter of Melvyn C. Douglas. The younger Douglas visited the set to see her grandfather play Rand, and she shares her impressions of all that went on. It's strange, though, that she's the only one participating. I know that the male leads have all passed on, so I guess Shirley MacLaine didn't want to be involved?

FINAL THOUGHTS:
Highly Recommended. In terms of picture quality, fans of Being There are going to want to double-dip for this Deluxe Edition, even if it does only contain one new extra (giving us a total of...one!). Anyone who doesn't already own the movie is going to want to rectify that tout suite. Written by novelist Jerzy Kosinksi, directd by the revered Hal Ashby, and starring Peter Sellers in his most sublime role, Being There is a magical, comic fable about living life in the moment. The cast is fantastic, and the script is an insightful peek into the strange foibles of human behavior. Truly one of a kind. 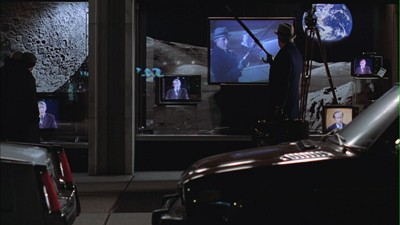