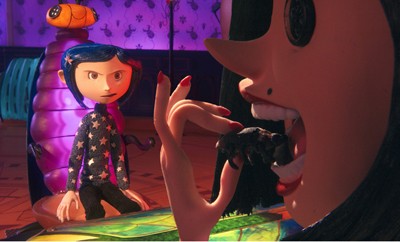 Believe it or not, despite being a movie critic, I do have a heart. There are movies that I feel bad about beating up on, films where the people involved have put every honest effort into making something good, and that every honest part of me really wants to like; yet, if I am really being honest, I can't.

Coraline is just such a movie. This adaptation of Neil Gaiman children's book is the inaugural effort of Henry Selick's Laika Studios. Selick is the director of A Nightmare Before Christmas and James and the Giant Peach, two movies I truly love but that never got a fair shake at the box office.* Coraline uses the same gorgeous stop-motion animation style that made those earlier films such treats to watch, and in that aspect, this new film does not disappoint. Selick has even added a state-of-the-art 3-D element that, at its best moments, is dazzling.** Unfortunately, unlike those earlier films, Coraline doesn't have a clever or involving script to give the dazzle substance.

The Jones family has recently moved to a remote location in Oregon from Pontiac, Michigan, uprooting their young daughter Coraline (voiced by Dakota Fanning). The relocation has taken her away from her friends and the life she knew. A girl with an active imagination, Coraline likes being outdoors and exploring, something that is hard to do in the rainy Pacific Northwest without getting drenched. Plus, her parents (Teri Hatcher and Daily Show correspondent John Hodgman) hate her getting dirty, which is ironic since their job is writing about plants for some catalogue or other. This leaves Coraline to interact with the other tenants renting the apartments in the refurbished old house she now calls home. They include the over-the-hill and overly corpulent actresses downstairs (Dawn French and Jennifer Saunders, the comedy team who created Absolutely Fabulous) and the crazy Russian (Ian McShane) training a mouse circus in the upstairs apartment.

Coraline also meets Wybie (Robert Bailey Jr.), a strange kid who likes to ride his minibike while wearing a scary Road Warrior-style helmet. It's Wybie who gives Coraline an old doll that is an exact replica of the little girl and who also offers the first warning of something supernatural going on. Wybie's grandmother owns the house the Joneses have moved into, and she has told her grandson it's a bad place for children, as they tend to unexpectedly disappear from the premises. This intrigues Coraline more than it scares her, and when some of the Russian's jumping mice lead her to a secret hole in her living room wall, she eagerly follows.

On the other side of this magical corridor, Coraline discovers the kind of life she always wanted. Her parents are there, but slightly changed--they are younger, fitter, and more accommodating. They also have buttons for eyes and refer to themselves as Coraline's "Other Mother" and "Other Father." Naturally, Coraline will be sucked into the mystery of this parallel world, lured by the promise of an ideal life, only to discover that there is a dark price to pay for such riches. This will also naturally inspire her to find the heroine within herself and teach her that what she has back in the real world is pretty good. You know, just in case you were worried that your kids weren't going to get a good moral out of this.

That is if you can keep them interested long enough to sit still until the message comes. It's hard to stay excited about anything that happens in Coraline. It's also hard to tell who the movie is intended to reach. It's a little scary for very young children, and it doesn't have enough soul to keep older kids or adults enthralled. Is there anything in between? 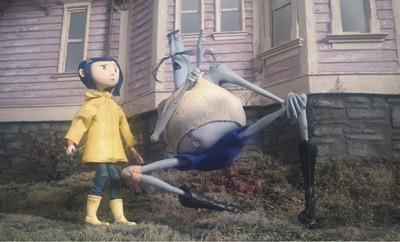 The problem with Coraline is one of tone. The story moves at one pace throughout, never heating up. In terms of speed, the sequences that should be scary and tense are virtually indistinguishable from the ones that are meant to be exciting and action-packed. Likewise, there are scenes of whimsy and slapstick, but they have no more energy than the scenes where Coraline is bored and roaming the halls. Selick keeps a consistent distance from any real emotion, and it serves to hold the audience at arm's length at the same time.

None of this is helped by the voice acting. Most of the performers sound like they are on sedatives. Dakota Fanning tries to add waves to Coraline's mood here and there, but quickly retreats to calmer waters. Ian McShane fares better with his eccentric Ruskie, but he's not in the movie enough to make any real difference. And what's with that kid Wybie? Shouldn't he be the wild child? How come every time he hops off the motorbike, he turns into a mealy mouthed wienie?

One can only guess how things ended up being so blah. Is it that too much time was spent on the visuals, or is that just where Henry Selick's true strength lies and being so far out on his own with this one, there was no one to balance out his vision with good storytelling? (I have not read Neil Gaiman's book, so I have no idea how well this Coraline matches that Coraline; I will say, I have never heard anyone level any of the complaints I have made about the movie at Gaiman's original, so I suspect the source is solid.) There is a real disparity between what's happening in the script and what's on the screen, with the animation operating at a top-level and the staging sticking firmly in the middle. Animation nerds such as myself will still want to see Coraline for the amazing stop-motion work and the fantastic creature and set designs (and this is why it still gets a mild recommendation from me). A lot of what we see in Coraline's other world is quite astounding. Though the 3-D effects are unnecessary probably 80% of the time, the other 20% is spectacular, creating an effective depth of field that transcends the cheap trickery often associated with 3-D films.

The question before you decide to plunk down the admission price for Coraline then is whether or not a bunch of pretty pictures is worth it. For me, it was just barely so, and I almost think that's more disappointing than if I had been able to hate it outright. To see artists get so close and yet still miss the mark is never fun. There was a lot of hard work put into this and it shows, so it saddens me that some of that effort wasn't redirected to areas that needed it.

* Contrary to the popular misconception, Tim Burton did not direct The Nightmare Before Christmas and Henry Selick did not direct the absolutely horrible The Corpse Bride; Selick did, however, direct Monkeybone, so he does have to take that hit himself.

** Not all theatres will be showing the film in 3-D; there is also a standard 2-D version.