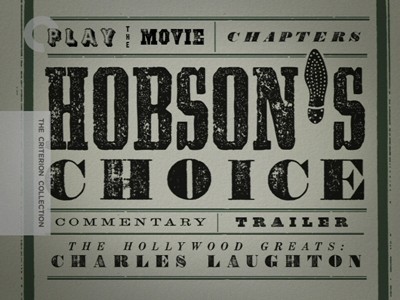 Given that David Lean's career is largely characterized by epics like Lawrence of Arabia and The Bridge on the River Kwai, it's easy to forget that he was also quite capable of smaller-scale human drama. Many of his earlier films were confined to the streets of England, including his romantic masterpiece Brief Encounter and his Dickens adaptations. If one were to draw a connecting line through Lean's filmography, in fact, one would see that the depth of character of his first efforts informed the greater dramatics of his later work, which is arguably why they are a cut above other entries in the adventure/spectacle field. Likewise, whether working in an open desert or on the cramped streets of Victorian England, he was a master of setting. It didn't matter where the story took place, Lean always created a believable cinematic world.

Such is the case with his 1954 comedy, Hobson's Choice, a clever tale set in the middle streets of 19th-century Manchester, somewhere between the slums and the commercial center of town. The Hobson of the title is Henry Hobson, a widower father of three and owner of a shoe shop, and played by the legendary actor Charles Laughton. The story--filmed from a screenplay by Lean, Norman Spencer, and Wynyard Browne and based on a stage production by Harold Brighouse--joins Hobson later in life. His business is moderately successful, enough so that he can leave its running to his three daughters while he spends most of the day in his cups down at the Moonraker Pub. The younger daughters (Daphne Anderson and Prunella Scales) have sweethearts and are looking to get married, but their cheapskate father doesn't want to pay the dowry it would require. He also doesn't want his older daughter, Maggie (Brenda De Banzie), to find a husband because then he'd lose the free labor. Though she's only aged 30, Hobson has already cast Maggie as the old maid, blind to the fact that the responsibility he has put on her all these years has prepared her for life far better than he could have hoped for.

Working in Hobson's shop is one William Mossop (John Mills), a meek cobbler with a special knack for molding leather. Seeing her opportunity after a rich patron (Helen Haye) praises Will's work, Maggie bullies him through a courtship and into business and marriage. They set up a rival shop, wounding poor Hobson's pride and enflaming his bluster. Maggie's scheming extends further, and she arranges her sisters' marriages, turns Will into a man, and brings it all back around to her pop in seemingly short order. The comedy is sweet and never mean-spirited, meaning Maggie's plans work out for everyone, even Henry Hobson gets to save face and retain a little ego. The structure and the presentation have a classical feel, keeping the same basic set-up as was likely found in Brighouse's play, with the various story points coming out of character behavior as much as they are there to service the plot.

In truth, Henry Hobson is a little like a bumbling King Lear, lost in the dementia of drink and unable to see which daughter truly cares for his well-being. Though the story as much belongs to Will and Maggie on paper, on celluloid, Charles Laughton takes full command of the scene. He tears up the screen whenever Hobson goes off on one of his many puffed-up rants, and the actor is skilled enough to convey the force of the tirade while also maintaining the impotence that lays the foundation for Henry's overcompensation. One of the best scenes is when a clearly bruised Hobson, being ribbed by his friends, drunkenly retaliates with bitter insults, exposing an awareness that his position as the patriarch has been undermined. Until Maggie's revolt, he had at least been able to keep up the image of being in charge when sat in the barstool, but now all of that is gone. This scene then makes way for the best bit of comedy in the movie: Charles Laughton, soaked through and through with whiskey, chasing the moon through rain puddles. I've seen a lot of comic drunks in my time (and even been one myself more times than I can count), and this performance is up there with the best. It's utterly convincing, both hysterical and heartbreaking, and laying the groundwork for the sympathy the character will require in the film's final act.

In addition to the charm of the story, Hobson's Choice has the bonus value of being full of wonderful set pieces and impressive location shooting. From the stone streets outside of Hobson's shop to the open parks and the lovers' view of the River Tame, David Lean expertly uses a combination of real environments and detailed sets to recreate a vibrant Victorian city (IMDB indicates that the film was shot both in the Salford suburb of Manchester and in Shepperton Studios). There is no obvious delineation between what may be authentic and what may have been built by a movie crew. The interiors are just as convincing and lively as the exteriors. The art direction of Wilfred Shingleton (Tunes of Glory) is lit with a smart eye for light and shade by regular Lean cameraman Jack Hildyard, creating an inclusive world that fully immerses the viewer in the filmic illusion.

This commitment to realism when combined with the quality of acting gives Hobson's Choice an unexpected air of truth even when the generally smart writing delivers some of its most contrived narrative twists. As with any great family comedy, the audience feels that they are part of the Hobson clan by the end, and thus when just about everyone comes together and gets what is best for them in the finish, it has an added punch of joyfulness. Through the rough stuff (Hobson's morning-after DTs), through the romantic stuff (Maggie and Will's patient acquiescence blossoming into love), and even through the subtle suggestions of class issues (Will's upward mobility, the family's snobbery in his direction), Lean delivers a message that it's both the good and the bad that binds family together, and faith tempered with obstinacy and even a little self-sufficiency will make any obstacle surmountable. Of the many choices that Hobson must make, it's the most important one: to let family do for him what may be best for all rather than simply what he thinks is best for numero uno. It's a quiet transformation, made partially under protest and through gritted teeth, but when it comes to Henry Hobson, one couldn't imagine it going any other way. 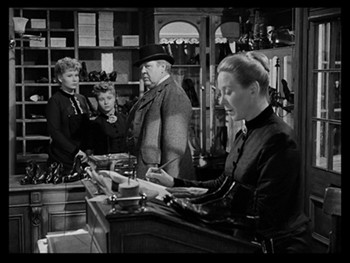 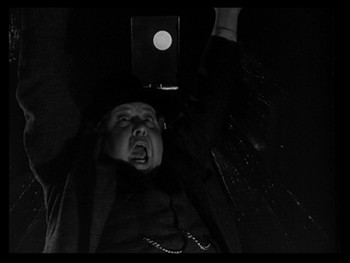 Video:
Criterion has worked with restored elements provided by the British Film Institute to bring Hobson's Choice to DVD in North America, and the results are spectacular. The pristine image--almost too pristine in the case of one scene with a rather obvious rear-projection background--is free of dirt or damage, has no signs of digital tomfoolery, and looks sharp with perfect contrast between darks and lights. Presented in full frame at 1.33:1, Hobson's Choice - Criterion Collection is a stellar DVD release. IMDB suggests that the original aspect ratio was 1.37, but if this is true, I don't see any indication that there is much loss, if any; note, as well, that the image is "pictureboxed," meaning it has black bars on all four sides when watched on widescreen televisions sets, which is a bit of overcompensation on behalf of those who still watch on old tube TVs. It's definitely a case of "your mileage may vary," pictureboxing doesn't bother me as much as it does others.

Sound:
The original English soundtrack has received a new Dolby mono mix that is just as good as the picture quality. No hiss, no fuzz, no pops.

Extras:
This single-disc release comes in a clear plastic case with a double-sided cover. The elegantly designed interior booklet contains photos, credits, a chapter listing, and a new critical essay by Armond White.

David Lean experts Alain Silver and James Ursini have recorded a full-length audio commentary for Hobson's Choice. I am largely familiar with these authors/commentators for their film noir books and their frequent appearance on the discs from the Fox Film Noir line. They have an excellent rapport that makes for spirited conversation, with the two personalities playing off one another and trading information. As expected, for Hobson's Choice, they dig into the production from a variety of angles, including on-set and business relationships and a discussion of Lean's filmmaking style.

The Hollywood Greats: Charles Laughton, clocking in at just over 44 minutes, is a candid tribute to the star produced by the BBC in 1978. It discusses his career and private life, including his contradictory nature and homosexuality. Interview subjects include his brother Tom; his wife, the actress Elsa Lanchester; director Billy Wilder; writer Christopher Isherwood; and actresses Lillian Gish and Shelly Winters. In addition to the requisite personal photos and clips from his films, we are treated to a scene from the unfinished Josef von Sternberg production of I, Claudius, a clip from Laughton's 1950s reading tour, and even a brief shot of his funeral.

Finally, we get the original theatrical trailer for the film.

FINAL THOUGHTS:
Highly Recommended. Hobson's Choice - Criterion Collection is a fantastic presentation of a too-often-ignored gem from the David Lean catalogue. Following the affable and curmudgeonly Henry Hobson, played with suitable aplomb by Charles Laughton, this British comedy tackles family, class, and the demon drink with wit and relish. The criss-crossing story of young love and aspirations put up against the stubbornness of a besotted patriarchy has charm and heart to spare. The Criterion transfer is gorgeous, and the extras that come with, though short on quantity, are of fine quality. 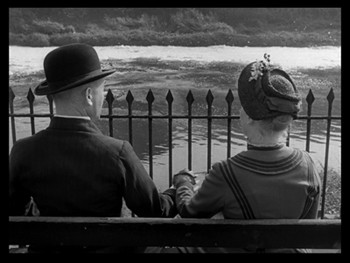 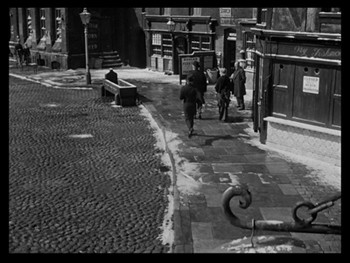