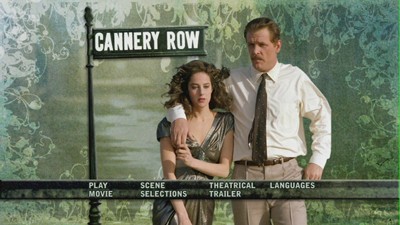 The 1982 film Cannery Row is an adaptation of the writings of John Steinbeck. Brought to the screen by writer/director David S. Ward (The Sting, King Ralph), it's meant to recreate the feeling of Golden Age Hollywood, like a movie the film's characters might have gone to see back in the 1930s. Unfortunately, it hits the ball far beyond the bleachers, landing somewhere in a cornfield of overindulgence--emphasis on the corn.

Nick Nolte plays Doc, a marine biologist who has moved to the Northern California coastal town known as Cannery Row, so named for the once thriving cannery businesses that have now fallen on disrepair. It's the kind of place people end up in when they have nowhere else to go or when they'd rather forget whatever place they've come from. Doc has a past he has traded for a quiet life collecting specimens of sea creatures, and he's become a kind of intellectual leader around the town, thanks to his kindness toward the slightly defective mystic, the Seer (Sunshine Parker), and his adoption of the local bums. This group is lead by Mack (M. Emmet Walsh), a genial schemer, and also features Hazel (Frank McRae), the typical Steinbeckian dumb giant.

As happens in these kinds of stories, Cannery Row starts buzzing when a new face comes to town. Suzy (Debra Winger) shows up with nothing but a suitcase and a lot of moxie, and she soon takes work at the local brothel. The madame who owns the place, Fauna (Audra Lindley, best known as Mrs. Roper from "Three's Company"), not only sees that Suzy doesn't belong in an establishment like hers, but she also picks up on sparks that fly between her and Doc. The two bicker whenever they get together, and Suzy realizes she knows who Doc is from his old life. Naturally, Fauna is going to want to push these two together, and naturally there will be some trouble in making this mismatched pair into a a real couple.

For about the first hour of Cannery Row, I was totally with the movie. Ward started out making a fine little slice of Americana, with very slight touches of magical realism and a sense of the oral tradition of small-town U.S.A. brought to life through the narration of John Huston. In the second hour, however, this all goes to hell, as Ward gets too caught up in capturing the quaint "Our Gang" let's-put-on-a-show falseness that quite a few movies made in the latter quarter of the 20th Century chased in an attempt to resurrect some contrived impression of old Hollywood values. It doesn't work, and instead comes off as condescending and hokey. Brawls where men tumble out of windows into mud puddles, town-wide baseball games, the well-meaning but idiotic interference of those that can't leave well enough alone--well, this ain't Frank Capra, I'll say that much. It's more like an image of the 1930s put together by reading Wikipedia.

The film isn't all bad. Nick Nolte is very good as Doc. His gruff voice works well when he plays in opposition to it. He sounds like he's seen several miles of bad road, but Doc's manner is one of kindness and generosity. He's mismatched with Debra Winger, however, who tries too hard to be the brassy screwball heroine. Her performance fits with Ward's overwrought direction, but that's just because they labor under the same hollow delusions. Ward does have his details down, I will give him that, and his elaborate sets look like a studio back lot from the time period, but when contrasted with the majestic shots of Nolte out on the rocks by the ocean, the illusion falls apart.

There is an earnestness to Cannery Row that leads me to believe that all involved meant well, and I am sure that there was some demand for Ward to recapture that period-piece magic that worked so well for him in The Sting--but then again, that was a movie he only wrote, he didn't direct, and ten years passed between that film and this one without him getting another screenplay produced. The flash of that initial lightning had long since passed. 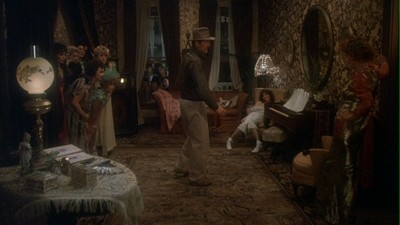 Video:
The DVD of Cannery Row preserves the movie's original 1.85:1 aspect ratio in a decent anamorphic transfer. There aren't really any compression issues, though there is some grain on the transfer and the darker scenes lack the same sharpness as the brighter material. On the other hand, the colors look natural and don't show any sign of fading.

Sound:
The audio has been given a monaural mix in Dolby Digital. It sounds good, without any hiss or unexpected noise. The music has punch, and the dialogue is clear.

Closed captioning is available for English speaking viewers, and there are also French subtitles.

FINAL THOUGHTS:
Rent It. Cannery Row is like a summer stock reimagining of what a classic Hollywood movie must be like, right down to cartoonish characters and knowingly fake-looking studio sets. Though Nick Nolte tries to bring some romantic vigor to his portrayal of a Steinbeck-style good guy, the overall film turns into one big fumble in the second half. Debra Winger overacts, the script is overwrought, and the whole thing rings hollow. It's a nice try and at times a mildly pleasant diversion, but otherwise no great shakes. 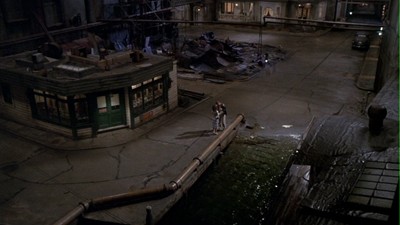