Paramount // Unrated // December 9, 2008
List Price: $37.99 [Buy now and save at Amazon]
Review by Stuart Galbraith IV | posted February 18, 2009 | E-mail the Author
There's still something like 500 more episodes yet to be released, but CBS DVD's Gunsmoke - The Third Season, Volume 1 is an encouraging sign that the classic Western television drama will continue in half-season volumes. This set launches the 1957-58 season, when the show was still a half-hour and in black & white, and in top form dramatically. I'm concurrently reviewing a massive boxed set of 300 classic Western TV episodes, most from the fifties, and while Annie Oakley, The Cisco Kid, Cowboy G-Men, The Roy Rogers Show and the like are all pretty entertaining, Gunsmoke truly is on an entirely different level. Dramatically it has more in common with - and its best episodes can proudly stand alongside classic episodes of Twilight Zone, The Defenders, East Side/West Side and other great shows of the '50s/early '60s.

Nineteen episodes are presented over three single-sided, dual-layered discs, with the only extras being the usual sponsor spots. It's pretty much exactly like CBS DVD's packaging of The Second Season, one minor difference being that the episode descriptions (with titles and airdates) are now easy to read inside the case. Otherwise, it's pretty much the same old, sometimes terrific show. 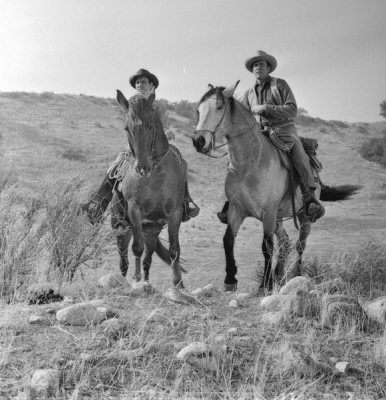 The prolific radio and television writer John Meston, to Gunsmoke what Rod Serling was to Twilight Zone, applies a tried-and-true writerly device to most of Gunsmoke's early episodes. There's probably a name for it, but I call it the "What's Going On Here?" structure, episodes where some puzzling situation is presented at the beginning of the episode, and the characters work through the mystery which is revealed/resolved at the end. Twilight Zone did this sort of thing a lot: "Five Characters in Search of an Exit," "Little Girl Lost," "The Odyssey of Flight 33." (The use of what sounds like CBS library music by Bernard Herrmann further ties the two shows together.)

The plurality of these early Gunsmokes are much the same. Why is Chester so convinced an ordinary-looking visitor to Dodge, a man (Thomas Coley) who seems like a pleasant enough chap, is trying to kill him? What is that intimating gunslinger type up to, and why is Miss Kitty spending so much time with him?

An especially good example of this Gunsmoke-as-mystery plotting can be found in "Potato Road." An uneducated, half-starved young man (Tom Pittman) from the backwoods outside Dodge, a real Deliverance type, asks Matt to arrest his father for murder. The young man, Budge Grilk, is very mysterious about the whole thing, and it only gets weirder as Matt and Chester are lured to the Grilk homestead, where (spoilers ahead) careworn Ma Grilk (Jeanette Nolan in another impressive, chameleon-like portrayal) and abusive, alcoholic Pa (Robert F. Simon) trap the lawmen in the "tater shack." (It's all so creepily done I actually thought for a bit the Grilks were going to turn out to be cannibals!)

Instead, it's all part of a crackpot scheme on the part of this desperately poor, not-very-bright family to kill Matt and Chester and then rob a bank in Dodge and kill everyone there, too, because then, so they think, no one will come after them. Typical of Meston's fine teleplays, "Potato Road" presents an unusual situation with unpredictable characters, it generates a lot of tension as Matt and Chester first try to figure out what's going on, and then later how to escape this crazy family before they're killed, and finally it crams an awful lot of dimensionality into its three guest characters. By the end Ma Grilk becomes a highly sympathetic, tragic figure. "Blaming her," Matt says, "Would be like blaming the night for being dark." A terrific show.

Another thing that continually impresses about these early Gunsmokes is the series' unhesitating grimness when the material calls for it. (Some but not all shows open with the haunting Boot Hill prologue, with voice-over of Matt discussing the pitfalls of life in the Old West.) "Blood Money" is a great example of this grimness: Harry Speener (Vinton Hayworth), an unpleasant barkeep headed for Dodge, is thrown from his horse miles outside of town. A kind stranger, Joe Harpe (James Dobson), saves the ungrateful, spiteful man's life, even as Speener complains all the while. In Dodge Joe becomes everyone's friend while nobody can stand Speener.

(More Spoliers) But then it turns out Joe is wanted for an old bank robbery he now regrets having been a part of. On the pretext of helping Joe sneak out of Dodge, Speener rides with Joe out of town then shoots him in cold blood in order to collect the $500 reward. Speener becomes a pariah in Dodge, and eventually Matt orders him to leave town. Outside of Dodge, Speener's horse throws him, and again he lay prostrate in the hot sun, unable to move. Some cowboys from Dodge discover him and, recognizing him as the man who killed Joe they ride off, leaving Speener to die. Matt and Chester find him dead some time later.

Note: Jack Klugman, John Anderson, and Patricia Smith appear in an episode called "Buffalo Man." I haven't seen it in many, many years but a fascinating behind-the-scenes documentary was filmed around this episode's climax as an example of how editors can take seemingly uninteresting, disconnected raw footage and maximize their effectiveness. Apparently some film classes now use this same coverage - all the printed footage from various wide angles and close-ups - to create their own cuts of this particular sequence.

Most episodes in this set were directed by Andrew V. McLaglen or Ted Post, with other shows helmed by Buzz Kulik and Richard Whorf, among others.

Once again, Gunsmoke looks exceptionally good on DVD. Shows are bit overly grainy but otherwise very sharp, very clean. The 19 black and white episodes are spread over three discs, with a total running time of about eight hours and 20 minutes. The Dolby Digital mono (English only) is clean and clear, and the show is closed-captioned.

As in previous sets, the only extra is several minutes worth of sponsor spots, with Arness extolling the virtues of L&M filter-tip cigarettes ("Reach for flavor. Reach for L&M!") and Remington razors. These products now sometimes appear in the lower-right-hand corner of the end credits.

This is yet another terrific set of shows; I just hope CBS DVD doesn't let us down and stays committed to the series to the end, even if it means still buying Gunsmoke DVDs in 2019. Highly Recommended.