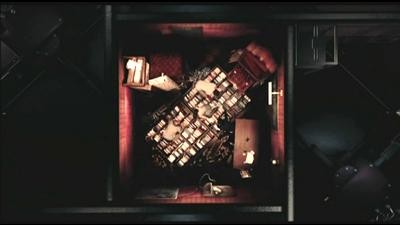 The problem with most thrillers is that their effectiveness is predicated on mystery. There is usually a problem or conflict presented to a group of people, and as the answers to the mystery are revealed, the intrigue of the premise can often sputter out. Fermat's Room is a Spanish-language thriller that follows the pattern: four geniuses are gathered in a room, and asked to answer questions within a minute or the walls of the room will move in -- Saw without the gore by way of logic puzzles set inside a Star Wars trash compactor. So how does the movie add up?

We meet five people, each given code names based on the names of famous mathematicians. We learn progressively less about each one. Galois (Alejo Sauras) is a ladies man (nothing turns women on like prime numbers) who was famous for the announcement that he had solved the long-standing Goldbach's Conjecture before his dorm room was trashed and his research destroyed. Pascal (Santi Millán) is an inventor, of hydraulics and duck-faced popcorn poppers. Hilbert (Lluís Homar) is a chess master. Oliva (Elena Ballesteros) is quiet and keeps to herself. They are invited, upon the solution of a number problem, to come and meet Fermat (Federico Luppi) to solve some sort of enigma he has created. Once they are all together, however, Fermat steps outside, the door locks behind him, and puzzles get texted in by way of a PDA with a one-minute time-limit before the room closes in.

Fermat's Room may be entertaining, but original it is not. Everyone, as they say, is connected, and the more we find out about our characters, the more we find out about who put them there and why, a device used by pretty much every thriller ever made. Since the four leads are engaging (especially Santi Millán, who looks a lot like a perpetually worried Tim Roth), the movie works, but the mechanics of the film are nothing new. Luckily, there aren't any dry spots during the short 92-minute runtime, so while none of the twists and turns are going to make your heart stop, you shouldn't find yourself checking your watch, either. 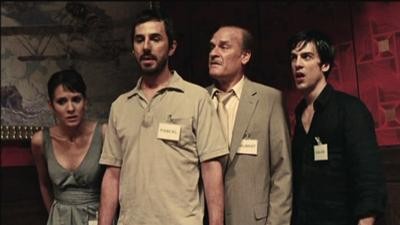 First-time feature directors Luis Piedrahita and Rodrigo Sopeña do alright, although some of their shots are too cramped to fully understand. For instance, the idea that all four walls are moving in doesn't quite make sense until the end of the movie (when we get a clear view of how it works), and a scene involving the characters propping a piano against the wall is a little vague. On the other hand, the use of strong angles and lines throughout is fairly well-done, and it's certainly a stylish set. While the film also uses a fair amount of text on the screen, despite it being in another language I had no problem following along.

The main thing holding Fermat's Room back is the screenplay. As usual, the motivation behind it all isn't quite as interesting as the hypothetical conclusion the viewer is devising, but the movie is smart enough to keep a few character moments for after the twist so that the experience doesn't live or die on the shock of the reveal (Shyamalan, take note). Other nitpicks arise from the one-minute time limit being a bit arbitrary, as the questions take 20 seconds just to read and the movie doesn't unfold in real time anyway, and many viewers will have already heard most of the problems texted to our supposed geniuses (I remember doing the lightbulb puzzle in school...).

I fully expect Fermat's Room to be discovered and remade for American audiences within the next couple of years. It's got a premise with a solid hook, it can be made cheaply, and depending on your perspective, it can be either a director's or actor's movie, which will attract both. This is cinematic comfort food, and it's not as worn out as the underdog sports hero. It's also just well-made enough that I enjoyed it. Who knew multiplication could be exciting?

Note: Fermat's Room is not rated, although If I were guessing I'd say it's probably the equivalent of a PG-13 for brief language. 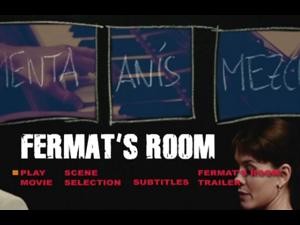 The Video
Presented in 1.85:1 anamorphic widescreen, Fermat's Room looks very digital. The contrast appears to be tweaked, with whites running hot, which leaves detail a tiny bit fuzzy. There is also a bit of blurring during fast motion due to the film's low-budget roots. Darkness also gets a bit muddy, although on the whole it's watchable and there are no significant issues.

The Audio
Only a Spanish 5.1 track graces this release. The dialogue is the primary concern, and it's clear and crisp. The cracking of bookshelves and tables is effective although this is not the most atmospheric mix I've ever heard. I'm far more appreciative of the fact that the disc includes separate English subtitles and English captions for the deaf of hard of hearing, plus Spanish subtitles as well.

The Extras
Autoplay trailers for Steven Soderbergh's Che, the gangster thriller Gomorrah, Prisoner, American Venus, and the film's original theatrical trailer are all that is included here.

Conclusion
Since there are no special features and the movie is merely pleasant, I can only recommend renting it -- which is a coincidence, since at the moment, that appears to be the only way you can see it.