Back to the Future: Two-Disc Collector's Edition 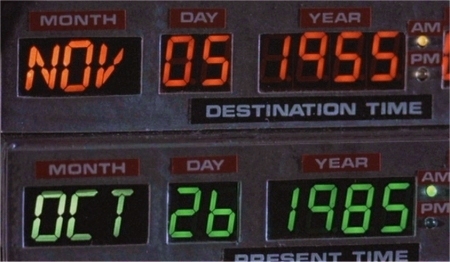 You'd have to search far and wide to find someone unfamiliar with Back to the Future or either of its sequels, as this successful franchise has earned plenty of fans during the past few decades. Co-written by Bob Gale and director Robert Zemeckis, these time-traveling adventures have scored high marks with critics and audiences alike---and even though some installments are more satisfying than others, there's something to enjoy during each of these three outings. The trilogy has spawned an animated series, a handful of video games, a themed amusement part attraction and, of course, a mountain of film-related merchandise, cementing Back to the Future as a true icon in American film history.

The original and best, Back to the Future (1985), was a true example of "magic in a bottle" upon its highly successful theatrical release. Behind the scenes, however, things didn't go as smoothly as expected. Originally cast with Eric Stolz in the lead role (after the studio's first choice, Michael J. Fox, declined due to television commitments), production was halted after six weeks of shooting and Fox was brought on board. The infamous "Stolz footage" has never been made available---even now, almost 25 years after the film's completion---and it doesn't look like a possibility in the near future. Even so, the highly-anticipated project eventually regained momentum---and after a rushed post-production process, the final cut of Back to the Future was delivered to theaters at breakneck speed. Though an exact measure of the film's financial success had yet to be revealed, most of the cast and crew had high hopes for its public reception...and the rest, as they say, is history.

Assuming you're new to the film (or simply need a refresher), Back to the Future begins the three-part journey of Marty McFly (Fox), a charismatic high school student with a girlfriend, a slightly dysfunctional family and a knack for ticking off authority figures. He spends most of his free time with Doc Brown (Christopher Lloyd), an eccentric inventor who's recently perfected his life's ambition: a time machine crafted out of a modified DeLorean sports car. After a few successful tests and a nasty run-in with terrorists, Marty escapes in the DeLorean---and before he knows it, he's bound for 1955. From here, Marty encounters a number of familiar folks in younger times, including his parents (Crispin Glover and Lea Thompson) and the brutish Biff Tannen (Thomas Wilson), among others. Marty unwittingly screws up history along the way---so before he can return home to 1985, the young lad's got to correct his mistakes. 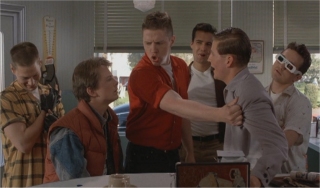 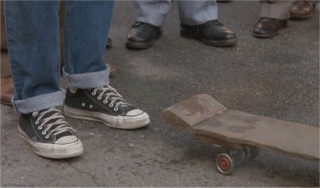 A perfect combination of comedy, drama and science fiction, Back to the Future remains as entertaining as ever...even while other movies of the era seem painfully dated in comparison. This is obviously due to the film's refusal to stay in the decade that created it, but it's also the result of a strong script, great special effects and a quick pace that defies its 116-minute running time. Our story remains suspenseful even though the tone is relatively light, resulting in a "family-friendly" adventure that doesn't insult the viewer with talking animals and cartoonish bad guys. The real villain---as much as Biff would hate to admit it---is history itself, which threatens to come undone...unless our hero sets the record straight, so to speak. It's not very often that a genuinely simple (yet charmingly complex) story wanders into town, thrilling audiences and earning critical praise at the same time, but Back to the Future represents a true high point in the summer blockbuster back catalogue. If you've never seen it---or simply haven't seen it in years---you'll be pleasantly surprised.

Originally released as part of a three-disc "Trilogy" boxed set in 2002, Back to the Future has finally been granted a double-dip by Universal. This two-disc set may disappoint some collectors, however: the first disc is identical to the previous release, while the second simply adds a handful of new bonus features. On the bright side, this is still a perfectly well-rounded effort, featuring a solid technical presentation and plenty of content to dig through. It's also worth noting that the other two installments are also available separately---and even though they don't offer substantial upgrades, fans are free to pick and choose. Let's take a closer look, shall we?

NOTE: The technical presentation of this release is identical to that of the "Trilogy" boxed set.

Presented in its original 1.85:1 aspect ratio and enhanced for 16x9 displays, Back to the Future looks very good from start to finish. The relatively soft focus and somewhat muted palette of the 1950s is handled nicely, while the more garish 1980s sequences also appear accurate. Image detail is solid, light film grain is present and black levels are fairly consistent. I'd image that a newly-struck transfer would improve the overall image slightly, but there's little to complain about here. Blu-Ray owners, on the other hand, should be roundly disappointed: Universal has made no announcement regarding the trilogy's high-def debut, so you'll have to keep waiting.

The audio presentation fares equally well, as Back to the Future features a lively Dolby Digital 5.1 Surround mix (also available in a French dub). One wonders why a more down-to-earth 2.0 Stereo mix wasn't included as well, but the surround track is rather tastefully done. Dialogue is crisp and clear, the film's music cues rarely fight for attention and a robust atmosphere is maintained. English SDH captions and Spanish subtitles are included during the main feature and most of the extras---including those found on the new bonus disc. Although it's odd that all of the bonus content hasn't been subtitled (including the deleted scenes), this is still a decent effort by Universal. 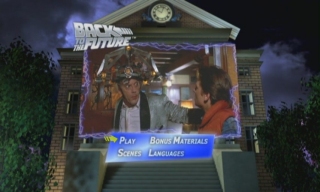 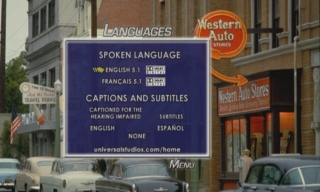 Seen above, the animated menu designs are basic and easy to navigate. The 116-minute main feature has been divided into 20 chapters, while no obvious layer change was detected during playback. This two-disc release is housed in a black hinged keepcase; also included is a matching foil-enhanced slipcover, which retains the film's theatrical poster design.

Bonus Features
All of the original bonus features return on Disc 1, leading off with a feature-length Audio Commentary by producers Bob Gale and Neil Canton. This track proves to be slightly dry at times, but it's certainly worth a listen for fans of the film. On a related note is a Q&A with Bob Gale and Robert Zemeckis, moderated by Laurent Bouzereau and recorded live at the University of Southern California. This audio-only session plays during the main feature, though it concludes with roughly 15 minutes to spare. Also here is an Enhanced Conversation with Michael J. Fox, in which the actor lends his thoughts periodically during the film's first 25 minutes. The movie-paired extras conclude with "Did You Know That? - Universal Animated Anecdotes", which are subtitle-based factoids that pop up periodically.

Also returning is a pair of general Featurettes, including "The Making of Back to the Future (14:28) and Making the Trilogy: Chapter One (15:30, below left). Next up is a collection of rough-looking Deleted Scenes (8 clips, 10:39 total) and a few amusing Outtakes (2:13), as well as a handful of Makeup Tests (2:18) and a generous Production Gallery, which includes original sketches and plenty of behind-the-scenes photos. Excerpts from the Original Screenplay are presented graphically, while fans are also treated to the film's wildly offbeat Teaser Trailer (1:25). These alone would constitute a decent spread, but there's more in store on this two-disc set. 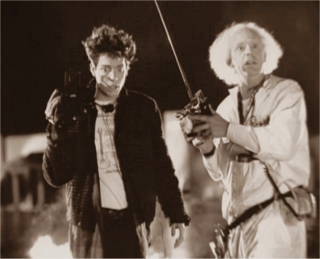 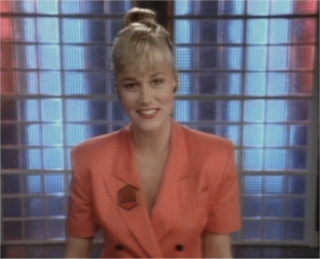 New to this release is an additional disc of bonus features, leading off with a pair of featurettes devoted to "Back to the Future: The Ride", which resurrects the experience of the popular Universal Studios theme park attraction. Fans can enjoy viewing the original Lobby Monitor (15:04, above right), pre-show footage and a run-through of "The Ride" (16:01), complete with a makeshift DeLorean dashboard. Though I've never experienced the ride itself---and thusly can't vouch for its complete accuracy---I'd imagine that fans of the attraction will enjoy the trip down memory lane.

Also here is a brand-new retrospective documentary, "Looking Back to the Future" (45:41), which includes interviews with key cast and crew members...including Fox, Lloyd, Zemeckis and Gale, among others. Divided into nine parts (including "The Script", "Casting Marty McFly", "Christopher Lloyd Reflects on Doc Brown", "The DeLorean as the Time Machine", "Building Hill Valley", "Preparing for the Johnny B. Goode Scene", "The Score", "Rushing the Cut" and "The Legacy"), plenty of production stories and behind-the-scenes tidbits are shared. Obviously, there's a fair amount of overlap between this documentary and the returning featurettes, but at least the stories are told in a slightly different fashion.

Next up is "Back to the Future Night" (27:11), a 1989 NBC television special hosted by Leslie Nielson. This lightweight but entertaining piece includes a behind-the-scenes tour of the first two films, corny sight gags and plenty of edited-for-television clips from both. It won't tell fans much that they don't already know...but for posterity's sake, this is certainly a welcome inclusion.

Last but not least is a newly-recorded Michael J. Fox Q&A, in which the actor answers a handful of text-based questions playable individually. Again, there's certainly a bit of overlap here, but Fox answers the questions (which include "How He Got the Role", "Shooting BTTF II and III Together", "DeLoreans", "Special Effects & Stunts" and "The Appeal of BTTF", among others) with enthusiasm and warmth. All bonus features are presented in a mixture of anamorphic widescreen, letterboxed widescreen and 1.33:1 formats, while nearly all applicable extras include optional English captions and Spanish subtitles.

There's no doubt that this new two-disc edition of Back to the Future isn't a full-fledged overhaul---but since the original release was such a strong effort, we'll let this one slide. Robert Zemeckis' original film remains as entertaining and fast-paced as ever, chock full of colorful characters and timeless situations. The technical presentation remains strong and the extras are plentiful, including roughly two hours of newly-compiled bonus features. All things considered, it's a no-brainer for those who don't own Back to the Future on DVD yet, or simply aren't interested in the other two installments. For everyone else, your level of interest will hinge completely on a desire for more extras. Recommended.