Bird with the Crystal Plumage, The

Blue Underground // Unrated // February 24, 2009 // Region 0
List Price: $34.95 [Buy now and save at Amazon]
Review by Stuart Galbraith IV | posted February 23, 2009 | E-mail the Author
Perhaps DVD's greatest legacy, at least for many die-hard movie fans, is how it introduced them to movies and genres up to then unavailable except in heavily bastardized versions on television and tape, or through the murky underworld of murky bootlegged videos. Thanks to DVD's popularity and pervasiveness, the ability to buy, sell, and trade DVDs on the Internet, and a growing demand that facilitated boutique labels like Blue Underground, Fantoma, Mondo Macabro, and All Day Entertainment, movies and even whole genres we may have only vaguely heard about suddenly became available, and in quality transfers that enabled viewers to see films in a good approximation of the theatrical experience, as experienced by moviegoers in their country of origin. German mysteries, Indonesian action films, Bollywood musicals, Hong Kong comedies, Spanish horror films, Soviet Bloc science fiction dramas - you name it. 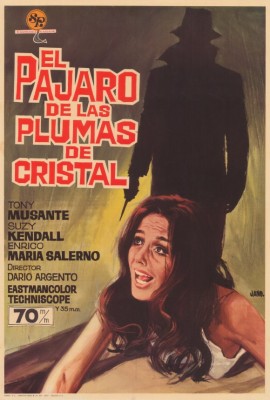 Spanish poster. Amazingly this Cromoscope/Techniscope production was blown up to 70mm in a few theaters, likely for film import tax reasons


One of the most enjoyable and surprising discoveries of this DVD age has been the Italian Giallo film, Hitchcockian mystery-thrillers noted for their stylish direction, cryptic titles, imported American and British stars, twist (and sometimes multiple twist) endings, and occasional horror elements, particularly the slasher film which giallo helped define. Giallo have something of an overstated reputation for nudity and bloodletting, but during the 1970s at least - the Golden Age of the Giallo -- the films generally were much less explicit than, say, Hitchcock's Frenzy (1972), one of the most giallo-like non giallo films.

Outside Europe, the giallo was largely unknown except as fodder for under-funded UHF stations for airings in the middle of the night. But then Anchor Bay released The Giallo Collection to DVD in June 2002, and more giallo titles gradually followed.

It's appropriate then that one of Blue Underground's first Blu-ray releases should be what might be considered the seminal (though not the first) giallo film, Dario Argento's The Bird with the Crystal Plumage (L'Uccello dale piume cristallo, 1970). Though many of its then-innovative components have since become genre cliches, it's still an impressive work with extremely good cinematography. Blue Underground's transfer is fine and the extras, though carried over from an earlier DVD release, are plentiful and informative.

Sam Dalmas (Connecticut-born Tony Musante) is a novelist living in Rome. He has writer's block and no wonder - his girlfriend, Julia (Suzy Kendall), is a beautiful British model.

Shortly before they plan to return to the U.S., Sam is walking the streets late at night when across the road, through the floor-to-ceiling glass windows of an art gallery, he sees a woman being stabbed by someone in a dark raincoat, who then disappears through a back door. Sam rushes to the woman's rescue, but finds himself trapped between the two glass doors leading into the gallery.

The woman, Monica (Eva Renzi), the wife of gallery owner Alberto Ranieri (Umberto Raho), survives the attack, and the following day Police Inspector Morosini (Enrico Maria Salerno, whose upper lip hair suggests a hot chocolate mustache) takes possession of Sam's passport, preventing the writer from leaving the country during the ongoing investigation. For his part, Sam begins to suspect Alberto, but in any case both Sam and Julia become the target of further attacks. Meanwhile, Sam is haunted by nagging memories of what he saw that night, convinced he's somehow not registering a vital detail that might solve the mystery.

The Bird with the Crystal Plumage was Dario Argento's first credit as director. Before this he worked as a screenwriter for several years, notably on Once Upon a Time in the West, in which he collaborated with Bernardo Bertolucci and director Sergio Leone. After Mario Bava's death Argento became Italy's leading horror filmmaker, but it was during the '70s, in films where he merged giallo with horror and surrealism, that Argento made most of his best films, famously Suspiria and Deep Red.

The Bird with the Crystal Plumage is a good showcase for Argento's talent though personally I much prefer his next film, The Cat o' Nine Tails (Il gatto a nove code, 1971), which is more confidently stylized and has better performances (by James Franciscus, Catherine Spaak, and especially Karl Malden). Tony Musante, who has a tendency to overact, oddly is too subdued and uncharismatic here, delivering one of the least interesting leading performances in the genre. Nevertheless, The Bird with the Crystal Plumage was a big hit in Italy and to some degree abroad. Wikipedia reports a budget of $500,000 but I'd be surprised if it was half that. An Italian-West German co-production filmed in English - which accounts for the appearance of ubiquitous German character actor Werner Peters, late of myriad Edgar Wallace thrillers, as a gay antique dealer - the film was a big hit, earning about 1.6 billion lire in Italy alone at a time when Mario Bava's much less expensive thrillers weren't even making back their negative cost.

There are many fine set pieces: a line-up scene featuring a masculine transvestite amusingly calling herself "Ursula Andress"; a fall from an apartment window daringly filmed by tossing the camera out the window and letting crash onto the pavement below; an amusing chase of an assassin (creepy-looking Hitchcock veteran Reggie Nalder, no less) who disappears into the crowd at a boxing commission meeting, where everyone's wearing the same style of blue cap and yellow jacket. The scenes at the austere gallery are the film's highlights, with its proscenium framing also suggesting a reptile's aquarium, with rubber-necking passersby peering into the crime scene. The stabbing of Monica and Sam's inability to reach her is extremely well staged and visually very interesting. 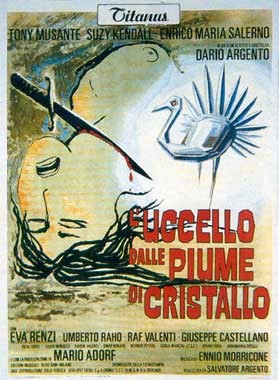 Blue Underground reports the film has been remastered from the original camera negative, and indeed this 1080p/50GB dual-layer, and region-free presentation, while inherently grainy is just about flawless. The picture's technical specs are somewhat murky: it appears to have been made in Cromoscope, which essentially was generic brand Techniscope, the 2-perf process in all respects except that it wasn't printed by Technicolor. (Tecnostampa is credited in Italy, Eastman Color in Spain.) The graininess of the film is not a complaint; indeed, it's a pleasure to watch something that looks so resolutely like a brand-new film print; watching it is like watching a film projected on a screen, not digital video transmitted onto a monitor. Throughout the high-def transfer flawlessly conquers problems long the bane of home video transfers: deep reds, night-for-night scenes, fog. The Blu-ray corrects a problematic and incomplete DVD release by VCI several years back.

The presentation defaults to English, and the opening and closing titles are in that language also. Happily, Blue Underground thoughtfully subtitles some of the Italian signage, newspaper headlines and whatnot, rather than leave them unsubtitled as many would, or revert to English version insert cards.

Presumably the film was always monophonic, but it's possible a multi-track version was prepared for the limited 70mm release in parts of Europe. In any case for Blu-ray there are 7.1 DTS-HD, 7.1 Dolby TrueHD, and 5.1 Dolby Digital Surround EX tracks in English, the later format also in Italian with optional English subtitles. The mixers don't go overboard: there's some directionality to the sound effects and Ennio Morricone's haunting score (with its lullaby-like "La, la, la, la, la, la, la, la" signature theme, one of the composer's most memorable) sounds better than ever. Morricone's exit music is retained.

The excellent supplements, all in standard-definition, were all previously available on Blue Underground's October 2005 DVD. They include, an unusually good Audio Commentary with Journalists Alan Jones and Kim Newman, TV Spots and Italian and U.S. Trailers.

Four very enjoyable and informative featurettes add to the disc's value: Out of the Shadows is an interview with Dario Argento; cinematographer Vittorio Storaro is the subject of Painting With Darkness; Ennio Morricone discusses the score in The Music of Murder, and actress Eva Renzi appears in Eva's Talking.

With The Bird with the Crystal Plumage Blue Underground continues to impress and lead the way among boutique labels testing the Blu-ray waters. For genre fans this is a must. Highly Recommended. 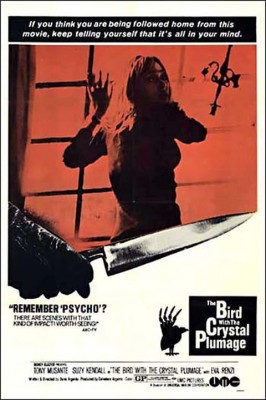